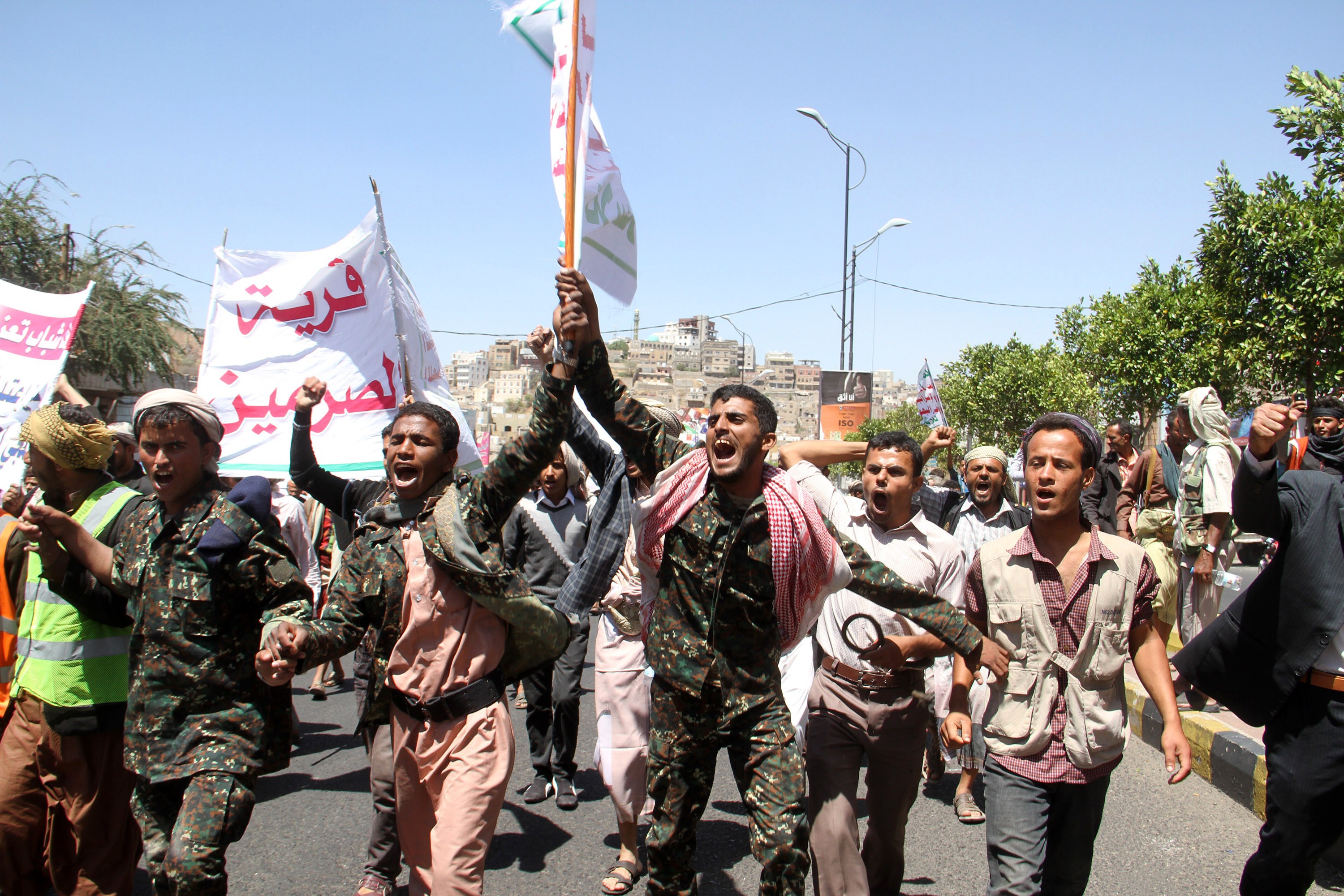 Iran, which is trying to garner international support to stop the bombing, stepped up its condemnation, with the supreme leader calling the air campaign "genocide."

The rebel fighters, known as Houthis, along with military units loyal to former autocrat Ali Abdullah Saleh, overran Ataq, the capital of oil-rich Shabwa province, after days of airstrikes and clashes with local Sunni tribes.

The Saudi-led coalition has imposed an air and sea blockade on Yemen and targeted the rebels and their allies to try to create a safe corridor that would allow the return of Yemen's internationally recognized president, Abed Rabbo Mansour Hadi, who fled the country last month.

The conflict pits the Saudi-led Sunni Gulf Arab coalition against Shiite rival Iran, which supports the Houthis and has provided humanitarian aid, though both Iran and the rebels deny it has armed them.

The growing regional involvement risks transforming what until now has been a complex power struggle into a full-blown sectarian conflict like those raging in Syria and Iraq.

On Thursday, Iran's supreme leader, Ayatollah Ali Khamenei, compared the Saudi-led strikes to Israel's bombing in the Gaza Strip. "This is a crime, genocide and legally pursuable," he said, according to his website. "It is necessary for the Saudis to withdraw from disastrous crimes. ... Yemenis will resist and will win."

He also lashed out at what he called "a few inexperienced young men" controlling affairs in Saudi Arabia - a veiled reference to the Saudi king's son, Defense Minister Mohammed bin Salman, who is leading the air campaign. "They prefer barbaric behavior over dignity," Khamenei said.

In a speech in Tehran, Iranian President Hassan Rouhani urged a cease-fire in Yemen to allow for broad-based talks on resolving the crisis.

"To the countries in the region, I say, let's adopt the spirit of brotherhood. Let's respect each other and other nations," Rouhani said. "Do not kill innocent children. Let's think about an end to the war, about cease-fire and humanitarian assistance to the suffering people of Yemen."

Comparing the Saudi-led campaign to Syria and Iraq, where a U.S.-led coalition is targeting Islamic State militants, he added: "You will learn ... that you are making a mistake in Yemen, too."

Saudi Arabia and its allies maintain their involvement is not sectarian but rather an attempt to curtail an increasingly expansionist Iran they accuse of exerting influence in a growing number of Arab countries, including Yemen. Iran denies it is meddling, and accuses the Sunni Gulf countries of inciting sectarianism in the region.

"There are a number of flights every single week that have been flying in. We trace those flights and we know this. We are well aware of the support Iran has been giving Yemen," Kerry said. "Iran needs to recognize that the U.S. is not going to stand by while the region is destabilized or while people engage in overt warfare across lines - international boundaries - in other countries."

Meanwhile, there was little sign the airstrikes have curtailed the rebels' advance.

The capture of Ataq came after days of clashes as well as negotiations with local tribes. When the Houthis and Saleh loyalists entered the city they encountered little resistance, raising questions about whether Yemen's fractured tribes - even in Sunni areas - can serve as reliable allies.

Military and tribal officials said leading tribe members facilitated the rebels' entry after days of fighting, with one official saying the Sunni tribesmen didn't want to keep on fighting, even though they were assisted by coalition airstrikes. The officials spoke on condition of anonymity because they were not authorized to brief reporters.

Ataq residents said the rebels and allied soldiers installed checkpoints all around the city. "Ataq is like a military barracks. A tank here, an armored vehicle there and non-stop patrols," said resident Saleh al-Awlaki. "I consider this an occupation by all means. And all occupation must be removed, also by all means."

Mohamed Abkar, another resident, said residents looted unguarded weapons warehouses in the city on Wednesday, but not a shot was fired as the rebels entered the city.

Letting the rebels and Saleh forces in the city was "treason," resident Khaled al-Wahabi said, blaming local tribes for facilitating their entry. "Shabwa tribes should bear the blame," he said.

Soon after the city's capture, residents reported that coalition jets bombed military camps in the area.

The spokesman for the coalition forces, Ahmed Assiri, confirmed the airstrikes and said the aim at this phase of the campaign was to cut off rebel supply lines and communications between the capital Sanaa, and rebel strongholds in the north.

The Houthis and their allies have seized 10 of Yemen's 21 provinces but could encounter resistance in Shabwa from al-Qaida in the Arabian Peninsula. The Saudi-led bombing - backed by U.S. arms shipments and intelligence sharing - threatens to weaken the rebels and Saleh's loyalists, who are al-Qaida's most powerful opponents on the ground.