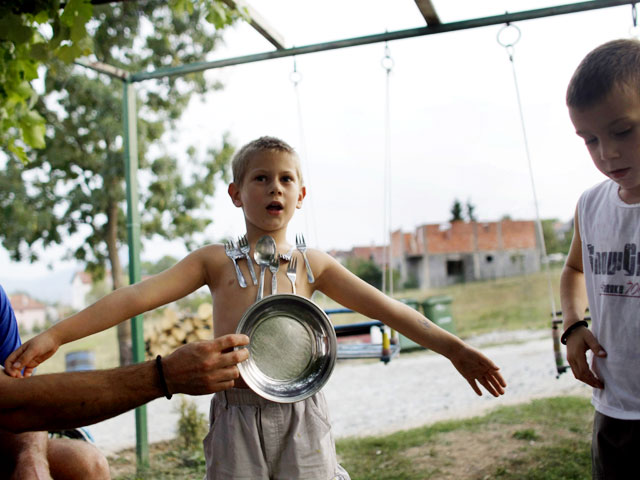 (CBS/AP) Talk about an attractive family. A pair of Serbian cousins are able to attract metallic objects to their skin, according to one of the boy's mothers.

"I asked him to fetch me a spoon so I could feed his little brother, and he yelled back: 'Mom, it sticks!'" Sanja Petrovic, mother of 4-year-old David, said. "I found him with several spoons and forks hanging from his body."

Petrovic said her sister's son, Luka, 6, has the same ability. "Other kids in the family can't do this, just the two of them," she said.

"As far as I know, there is no medical or scientific explanation," said Belgrade-based radiologist Dr. Mihajlo Dodic. He said the cousins' apparent magnetism borders on the "paranormal."

This isn't the only case in which humans have claimed to have magnetic powers. In fact, YouTube is chockablock with videos that purport to show "magnetic people." But is "human magnetism" a real phenomenon - or a hoax?

Speaking of a similar case in February, Dr. Gabor Somorjai, a professor of chemistry at University of California, Berkeley, said it wasn't magnetism that causes metal objects to stick to the body - but sticky oils on the skin.

"Your skin is covered with grease and oils," he told LiveScience. "You can clean them off with soap, but within less than a minute it will again be covered with oils." The chemical properties of the oils allow metallic objects to stick in place - and the smoother the skin, the stickier it is.

Benjamin Radford, outspoken debunker of dubious scientific claims, wrote in a commentary on Discovery News that magnetic powers are more likely to be claimed for children because their skin is less hairy, and any hair between the object and the skin would reduce skin friction. And he was dubious of claims of magnetism for another reason.

"If the reason the objects are sticking to the 'magnetic' person is because of magnetism instead of simple skin friction, there's no reason they should only stick to bare skin," he wrote in February. "Magnetic attraction works even through a thin piece of paper, and if the magnetism is as strong as is claimed, the magnetic people should be able to do their trick with a shirt on."

The pictures provided to the Associated Press do not show objects going through clothes.

Radford also said that pictures and videos of "magnetic children" typically show them leaning backward. If they were truly magnetic, he said, the objects should stick to their bodies even when they lean forward.

Ultimately, Radford said, "There's no real secret or mystery to it: Anyone who's seen a child with a spoon on his or her nose has seen it before."

What do you think? Take a look at Luka and David, and see for yourself...