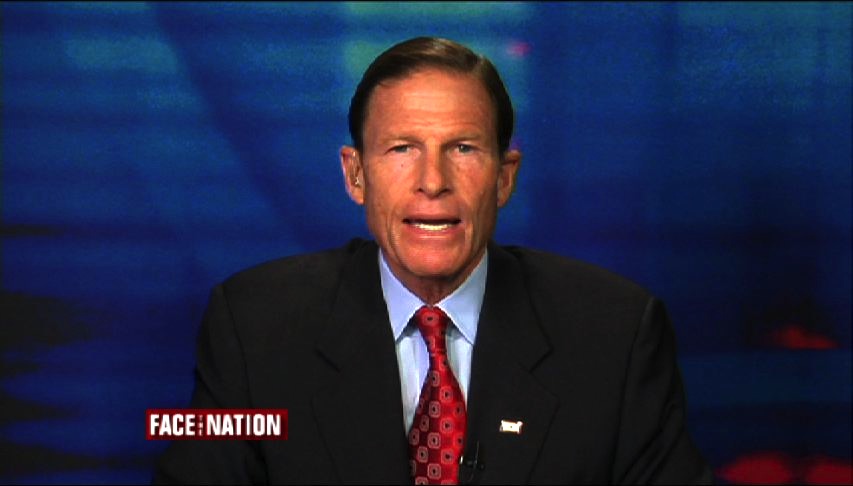 Connecticut Sen. Richard Blumenthal said on "Face the Nation" Sunday that this weekend's shooting rampage in California should prompt lawmakers to reconsider legislation that would help provide more resources for the mentally ill and prevent them from buying guns.

"We need more resources to make the country healthier and to make sure that these kinds of horrific, insane, mad occurrences are stopped. And the Congress will be complicit if we fail to act," said Blumenthal.

The Connecticut Democrat actively worked to pass more gun control legislation in the wake of the December 2012 shootings at Sandy Hook Elementary School in Newtown, Conn. Every single bill, ranging from a ban on military-style assault weapons to a strengthening of background checks, failed to garner enough support to pass even the Democrat-controlled Senate.

Blumenthal said Sunday that the shootings remind him of the Sandy Hook aftermath.

"I really, sincerely hope that this tragedy, this unimaginable, unspeakable tragedy will provide an impetus to bring back measures that will keep guns out of the hands of dangerous people who are severely troubled or deranged like this young man was, and provide resources," Blumenthal said. "We need mental health resources and that initiative, I hope, will provide a common ground, a point of consensus that will bring us together in the Congress and enable the majority."

CBS News' Major Garrett pressed Blumenthal on whether any legislation might have stopped suspect Elliott Rodger from legally purchasing the three handguns he used in the attack, which left six dead and thirteen injured. The senator noted that the legislation that failed in Congress last year would have given more resources for police departments to diagnose and detect mental illness and intervene.

"Obviously, not every kind of gun violence is going to be prevented by law, it's out of Washington, but at least we can make a start," he added.

Sen. John Thune, R-S.D., did not weigh in on further legislation to limit gun sales, but backed Blumenthal's push for efforts to improve mental health care.

Thune said that Congress should work on ensuring "that we have policies in place that allow people with mental health issues like these to be diagnosed and to be treated."

"I think that's something on which there is agreement and that's where we ought to be focusing our efforts," he said.

What makes an effective president?