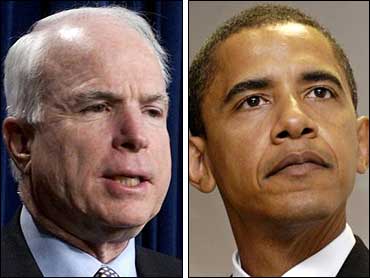 There's an unusually angry feud on Capitol Hill between two high-profile senators over the contentious issue of lobbying ethics reform.

The exchange, made in letters between the pair, was the latest sign of trouble as the two parties try to come up with legislation governing relations with lobbyists.

Based on past Obama statements, "I concluded your professed concern for the institution and the public interest was genuine and admirable," McCain wrote in a letter to Obama on Monday. "Thank you for disabusing me of such notions."

Obama, a rising star in the Democratic Party, responded in a letter later Monday that he had "no idea what ... prompted" McCain to strike out like that.

"The fact that you have now questioned my sincerity ... is regrettable but does not in any way diminish my deep respect for you nor my willingness to find a bipartisan solution to this problem," Obama wrote.

"It's very clear that lobbying reform is a very personal issue for John McCain, it's very important to John McCain. He believes Sen. Obama gave him a private assurance to work with him on bipartisan reform," Borger said. "He thinks Sen. Obama backed out for partisan reasons because like most Democrats, Sen. McCain thinks, Sen. Obama would rather have the issue than solve the problem heading into the 2006 election."

McCain was responding to an earlier Obama letter in which the first-term Democrat last week thanked McCain for including him in bipartisan talks on lobbying reform but expressed some differences in approach to the issue spurred by recent lobbying scandals.

McCain, long a backer of legislation to reduce the influence of big money and special interests in lawmaking, is sponsoring a bill that would require lobbyists to disclose more information on their activities, including the gifts they give lawmakers, double to two years the waiting period before a lawmaker can take a job as a lobbyist and require members to pay charter rates when they travel on corporate jets.

Obama, in last week's letter, promoted a bill backed by House and Senate Democrats that would take similar action on members becoming lobbyists, disclosure and corporate jets. It also bans gifts, meals from lobbyists or organizations that employ lobbyists and creates a new office of public integrity in the House to monitor compliance of lobbying rules.

Obama also questioned the effectiveness of McCain's proposal to set up a task force to further study the lobbying ethics issue.

Aides to McCain confirmed that McCain saw Obama's first letter as partisan. "I'm embarrassed to admit that after all these years in politics I failed to interpret your previous assurances as typical rhetorical gloss routinely used in politics to make self-interested partisan posturing appear more noble," McCain wrote.

"During my short time in the U.S. Senate," Obama responded Monday, "one of the aspects about this institution that I have come to value most is the collegiality and the willingness to put aside partisan differences to work on issues that help the American people. It was in this spirit that I approached you to work on ethics reform, and it was in this spirit that I agreed to attend your bipartisan meeting last week."

Obama, the first black man in the Senate in 25 years and only the fifth in history, became an overnight celebrity with his keynote address to the Democrats' 2004 party convention. Almost overnight, Obama, the son of a black father from Kenya and a white mother from the U.S., became a darling of the party.

The guilty plea by former lobbyist Jack Abramoff early this year to various felony charges involving his attempts to influence Congress touched off numerous efforts by Republicans and Democrats to move legislation tightening up restrictions on interactions with lobbyists.

But initial promises by the two parties to work together have been hard to keep, with Republicans irritated by Democratic attempts to link the lobbying issue to what they call a Republican "culture of corruption."

Attempts by the House Republican leadership to craft a Republican bill have also met resistance from some in the party's rank-and-file who say a total ban on gifts and privately financed travel is an overreaction to the problem.

In the Senate, Majority Leader Bill Frist has asked the Homeland Security and Governmental Affairs Committee to vote on a bill the week of Feb. 27. The top Democrat on that panel, Sen. Joe Lieberman of Connecticut, is a cosponsor of the McCain bill.