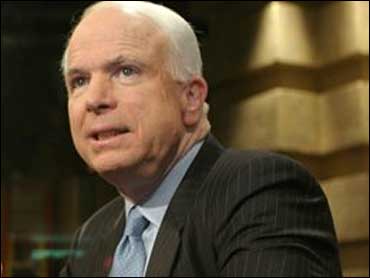 The following is Sen. John McCain's letter to to Sen. Barack Obama regarding ongoing Congressional efforts towards bipartisan lobbying reform:

I would like to apologize to you for assuming that your private assurances to me regarding your desire to cooperate in our efforts to negotiate bipartisan lobbying reform legislation were sincere. When you approached me and insisted that despite your leadership's preference to use the issue to gain a political advantage in the 2006 elections, you were personally committed to achieving a result that would reflect credit on the entire Senate and offer the country a better example of political leadership, I concluded your professed concern for the institution and the public interest was genuine and admirable. Thank you for disabusing me of such notions with your letter to me dated February 2, 2006, which explained your decision to withdraw from our bipartisan discussions. I'm embarrassed to admit that after all these years in politics I failed to interpret your previous assurances as typical rhetorical gloss routinely used in politics to make self-interested partisan posturing appear more noble. Again, sorry for the confusion, but please be assured I won't make the same mistake again.

As you know, the Majority Leader has asked Chairman Collins to hold hearings and mark up a bill for floor consideration in early March. I fully support such timely action and I am confident that, together with Senator Lieberman, the Committee on Governmental Affairs will report out a meaningful, bipartisan bill.

You commented in your letter about my "interest in creating a task force to further study" this issue, as if to suggest I support delaying the consideration of much-needed reforms rather than allowing the committees of jurisdiction to hold hearings on the matter. Nothing could be further from the truth. The timely findings of a bipartisan working group could be very helpful to the committee in formulating legislation that will be reported to the full Senate. Since you are new to the Senate, you may not be aware of the fact that I have always supported fully the regular committee and legislative process in the Senate, and routinely urge Committee Chairmen to hold hearings on important issues. In fact, I urged Senator Collins to schedule a hearing upon the Senate's return in January.

Furthermore, I have consistently maintained that any lobbying reform proposal be bipartisan. The bill Senators Joe Lieberman and Bill Nelson and I have introduced is evidence of that commitment as is my insistence that members of both parties be included in meetings to develop the legislation that will ultimately be considered on the Senate floor. As I explained in a recent letter to Senator Reid, and have publicly said many times, the American people do not see this as just a Republican problem or just a Democratic problem. They see it as yet another run-of-the-mill Washington scandal, and they expect it will generate just another round of partisan gamesmanship and posturing. Senator Lieberman and I, and many other members of this body, hope to exceed the public's low expectations. We view this as an opportunity to bring transparency and accountability to the Congress, and, most importantly, to show the public that both parties will work together to address our failings.

As I noted, I initially believed you shared that goal. But I understand how important the opportunity to lead your party's effort to exploit this issue must seem to a freshman Senator, and I hold no hard feelings over your earlier disingenuousness. Again, I have been around long enough to appreciate that in politics the public interest isn't always a priority for every one of us. Good luck to you, Senator.