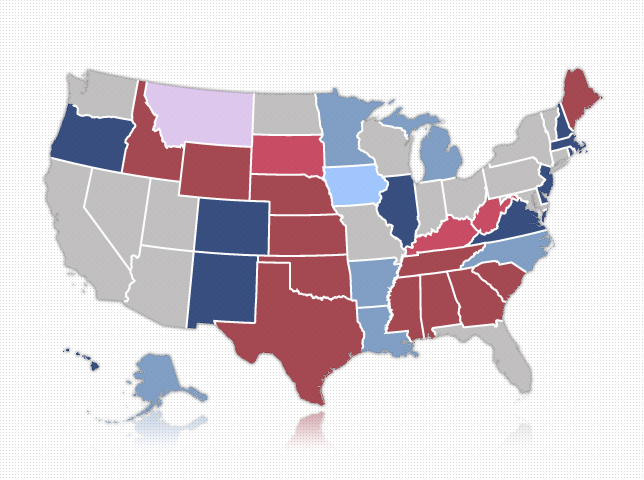 In this era of partisanship and filibusters, majority control has rarely meant so much

Thinking about next year's Senate map isn't just for political junkies like us. It gives context to the legislative politics we're watching now. And in an era of increased partisanship, filibusters, and party-line voting, majority control of the Senate has rarely meant so much.

By the seat numbers, Democrats start on the defensive, though they've been in that spot (and succeeded) before. They have more seats (20) up next year than Republicans (15) though that's an imbalance sometimes faced, almost by definition, by the majority; the current Senate is 54-46 Democratic. But the story here is really about terrain, not numbers: much of 2014's Senate fight will take place in "red" states which lean conservative, and especially in midterm years when the electorate is older and turnout, smaller.

Republicans would start off favored to capture West Virginia and South Dakota, in the absence of strong Democratic candidates that may yet emerge, and to hang on to all of their own seats up, pending the outcome of the New Jersey special election.

The latest news out of Montana reads like another blow to the Democrats, as popular Democratic former Governor Brian Schwietzer declined to run for the open seat, for the moment leaving the party without the sort of high-profile, high name-ID candidate they need to hold this in an otherwise lean-red state. For Republicans to find the remaining pickups they'd need en route to 51, they could make a run through other red states targeting Democratic incumbents (Arkansas, North Carolina, Louisiana, Alaska) though success in that is far from assured. They'll challenge in Iowa, depending on which candidates emerge, another seat being vacated by a Democratic incumbent. All of these calculations are already playing in our politics; we've recently seen Democrats who'll face conservative electorates next year weighing decisions on bills from immigration to agriculture to guns, and the fundraising and recruiting that often goes on behind the scenes this year will have a major impact on what happens next.

Democrats' relatively large margin in the Senate provides some cushion, but what would really help - but they don't quite have - is a seemingly-easy pickup opportunity of their own.

They'll put pressure on high-profile Minority Leader Mitch McConnell, who hasn't polled well in Kentucky, and they got the candidate they wanted when Alison Lundergan Grimes jumped in. But this still starts with an edge to the Republicans. Any Democrat has to fight against perceived ties to the national party and the president, who'll be unpopular, as well as a well-funded opponent; McConnell's campaign has been gearing up for this kind of fight for a while.

Meanwhile, there are some blue states where Democrats look to be in decent shape now, but are worth watching to see how challengers emerge: Places like Michigan, perhaps; maybe Minnesota, though Al Franken seems in good standing; New Hampshire often looks like a battleground by the numbers, but Jeanne Shaheen hasn't gotten a lot of competition.

Over the last two cycles, a host of Republican Senate nominees proved to be too-far right for the general election, costing the GOP what had once seemed sure pickups in places like Delaware, Colorado, Nevada, and Indiana to name a few. As of now that process doesn't look too likely to repeat itself, but again, it's early. And many of the outcomes in the fall of an election year are actually set in motion months and months before.

In some ways, though, it's getting easier to take these longer looks ahead. Moderates on both sides are disappearing, the result of safer seats, fear of primaries, and a map that has carved out strong regional differences between the coasts and the South and Midwest.