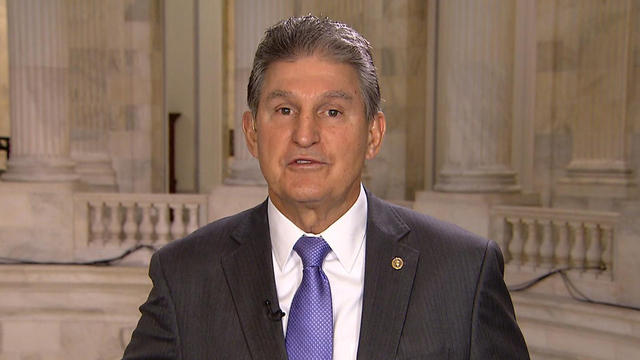 Sen. Joe Manchin, D-West Virginia, is pleading with the president to not release a classified memo penned by the staff of Rep. Devin Nunes, R-California, that details alleged surveillance abuses by the FBI that targeted members of the Trump campaign during the 2016 presidential election. Manchin told "CBS This Morning" that Nunes has "neutered the credibility of this Intelligence Committee on the House" and it would be "wrong" to release the memo.

"I would definitely say Mr. President, please don't do that, that is wrong, it is absolutely wrong," Manchin said. "The Senate Intelligence Committee is the only thing we have left that can put confidence into the system and also into the investigation."

Members of the House Intelligence Committee voted along party lines Monday to make the four-page document public. In the same meeting, the committee voted against publicly releasing a memo drafted by the minority and intended as a rebuttal to the majority's document.

The memo is said to contain evidence that the FBI wrongly relied on an unverified dossier compiled by former British intelligence agent Christopher Steele to secure surveillance warrants under the Foreign Intelligence Surveillance Act. It was sent to President Trump Monday evening, but he has not yet seen it.

But as the president was exiting the House chambers on Tuesday, he appeared to joke to Rep. Jeff Duncan, R-South Carolina about the prospects of him releasing the memo.

"Let's release the memo," Duncan told the president after the conclusion of the speech.

Mr. Trump added, "Can you imagine that?" Then, pointing to another member of Congress, said, "He'd be too angry."

As for the possibility of Mr. Trump firing Special Counsel Robert Mueller in the throes of his own Russia investigation, Manchin again said it would be the "absolute wrong thing" for Mr. Trump to do.

The New York Times reported last week that Mr. Trump had ordered the firing of Mueller in June 2017 but eventually backed down after White House Counsel Don McGahn threatened to resign rather than tell the Justice Department to dismiss Mueller. However, sources directly involved in the deliberations tell CBS News chief White House correspondent Major Garrett that McGahn's threat was not a direct response to an order by Mr. Trump to dismiss Mueller.

"I pray to God that doesn't happen for the sake of our country and I would say for the presidency and his administration that would be the absolute wrong thing," said Manchin.

He added, "then you will see Congress cohere around this system to protect the judicial system and protect Mr. Mueller. I really believe that, so I believe that would be a wrong move."

Manchin did, however, applaud the president's performance during Tuesday night's State of the Union address, saying he "showed respect for the president." Mr. Trump touted the administration's wins over the course of his first year in office, including overhauling the nation's tax code and boosting the U.S. economy while pushing Congress to pass immigration reform in a bipartisan fashion.

Asked if it would be easier or harder for fellow Democrats to work with the president after his address, Manchin said, "I can't speak for the rest of  my caucus, I really can't, but we're all Americans, whether you're Democrat or Republican, you got to make this place work and you got to reach across the aisle."

Manchin, who described himself as a "very independent" member of his caucus, said he was also happy to hear Mr. Trump cover issues like nation's dwindling infrastructure, the opioid crisis and clean coal during his speech to the joint session of Congress.

"There's so much we need to do, John, and just to sit there and frown is not going to fix anything, so let's embrace each other and try to make it work and when we disagree we can to work through that," he said.

He added, "I'm going to do what I think is right, that's the way I was raised."

One family's wrenching decision to sell girl into marriage for food