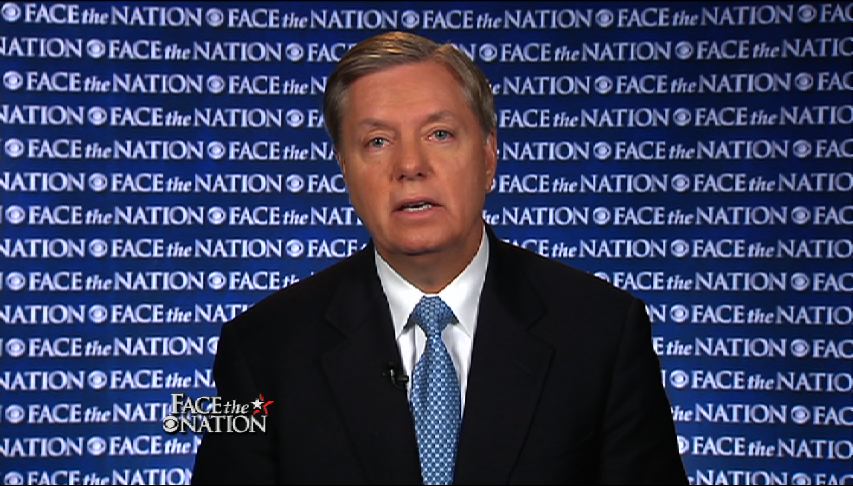 (CBS News) On "Face the Nation," Sen. Lindsey Graham, R-S.C., said he is "surprised" about David Petraeus' abrupt resignation as CIA director due to an extramarital affair, but he said the larger question plaguing the CIA and the country is what happened in Benghazi, Libya.

"I hate what happened to General Petraeus for his family and the families for those involved, but we have four dead Americans in Benghazi. We have a national security failure in the making," Graham said. "[W]e've got to get to the bottom of Benghazi," he added.

Graham said, regardless of Petraeus' resignation, it is "essential" that he testify before Congress in a series of hearings scheduled this week. "I don't see how in the world you can find out what happened in Benghazi before, during, and after the attack if General Petraeus doesn't testify."

Graham said Congress should open coordinated hearings to include multiple committees that oversee intelligence, diplomacy and defense. "I think that would be smart for the congress to combine resources," he said, pointing to similar action to investigate Watergate and Iran-Contra.

When asked by "Face the Nation" host Bob Schieffer if United Nations Ambassador Susan Rice should be nominated to replace Hillary Clinton as Secretary of State, Graham said he "cannot imagine promoting anybody associated with Benghazi at this point."

Five days after the attack on the U.S. Consulate that killed four Americans, including Ambassador Chris Stevens, Rice publicly proclaimed that the attacks were "spontaneous" and a result of an American-made, anti-Muslim film. Rice has been widely touted as a possible replacement to Clinton.

"I think Susan Rice would have an incredibly difficult time to get through the Senate. I would not vote for her unless there's a tremendous opening up the information explaining herself in a way she has not yet done," Graham said. "I'm not going to promote somebody who I think has misled the country or is either incompetent."

Turning to electoral politics, Graham, who has been a vocal critic of alienation of women and minorities by the Republican Party, continued his criticism. He said the GOP "has built a wall between the Republican Party and the Hispanic community because of tone and rhetoric.

Also on Face the Nation:
Axelrod optimistic about a deal on the "fiscal cliff"

"It's the fastest growing demographic in the country and we're losing votes every election cycle and it has to stop," he said. "It's one thing to shoot yourself in the foot, just don't reload the gun."

Graham said he intends to pass a comprehensive immigration reform bill. He said it must increase border security, include a guest worker program and provide a path to legal status for the undocumented immigrants currently living in the U.S.

Graham's statement today comes as several conservative leaders have altered their position on immigration post-election, including House Speaker John Boehner. He hinted at getting behind immigration reform.

Finally, on the "fiscal cliff," Graham said the president needs to adopt the Simpson-Bowles plan, a bipartisan plan by a special committee appointed by President Obama that drafted a plan to cut $4 trillion dollars of deficit over the next decade through a series of spending cuts, tax increases, and changes to Medicare and Social Security.