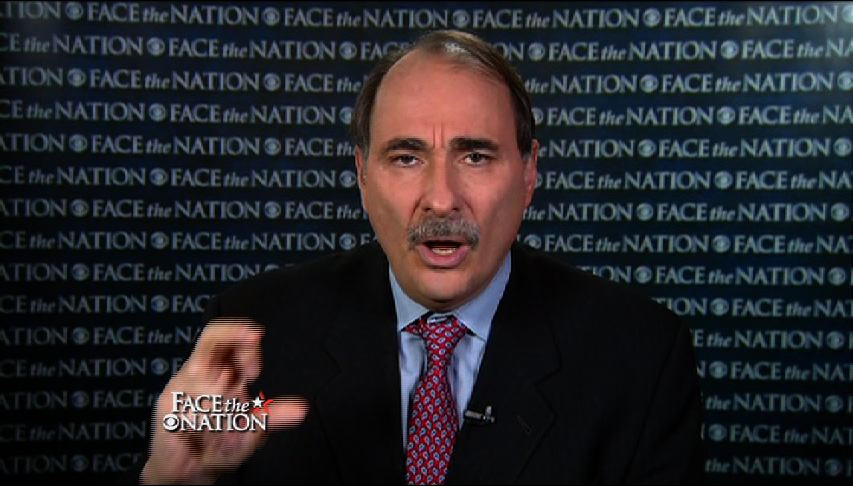 (CBS News) As Congress prepares to return to Washington this week to address the looming "fiscal cliff," President Obama's senior campaign adviser David Axelrod said he is encouraged by statements made by the top Republican in the House of Representatives.

"[H]e didn't want to foreclose discussions and that was a positive sign," Axelrod said on CBS' "Face the Nation," referring to House Speaker John Boehner's remarks last week that he is open to higher revenue to reduce the deficit via broader tax reform.

"I think that the Speaker's comments have been encouraging and, obviously, there's money to be gained by closing some of these loopholes and applying them to deficit reduction, so I think there are a lot of ways to skin this cat so long as everybody comes with a positive, constructive attitude toward the task," Axelrod added.

Congress and the president must tackle the "fiscal cliff," a series of automatic, across-the-board spending cuts and tax increases set to go into place at the beginning of the year unless Congress acts. The Congressional Budget Office said unemployment will rise to above 9 percent if Congress fails to avert the "fiscal cliff."

Axelrod reinforced the president's sentiment that he will not accept a deal where the wealthy does not pay a larger share of taxes.

"The President believes it's more equitable to get that from the wealthiest Americans who have done very well and, frankly, don't need those tax cuts, and who benefited disproportionately from the tax cuts in the past decade. And most Americans agree with that," Axelrod said.

He pointed to the elections as proof that Americans are on the president's side. "[I]f you look at the exit polls, I think it was somewhere around 60 percent of the American people agreed with the president's position on this issue of taxes," he said.

Reminiscing about the president's win Tuesday night, Axelrod said they "went into Election Day with confidence."

Also on Face the Nation:
Sen. Graham: "Essential" for Petraeus to testify at Benghazi hearings

"I had reams of data from these young kids who do these analytics based on polling and based on our other data we'd gathered and they pretty much hit it on the nose," Axelrod said. "By 8:00 or 8:15 that evening we were pretty confident that this race was going to be ours and it was just a matter of time, and less time, frankly, than we anticipated."

Axelrod said the volatility of the public polls differed from their internal analysis that showed a lead that "didn't fluctuate by much."