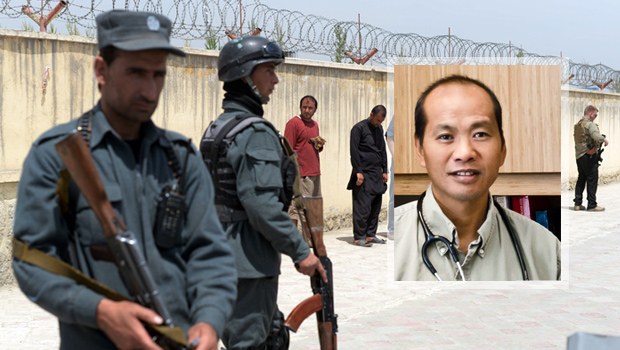 KABUL, Afghanistan -- An Afghan police officer on duty as a guard at a Kabul hospital opened fire Thursday morning on a long-serving American doctor at the facility, killing him and two other U.S. nationals in the attack.

The shooting at Cure International Hospital in western Kabul was the latest attack on foreign civilians in the Afghan capital this year.

The U.S. Embassy in Kabul confirmed that three Americans were killed in the attack.

In Chicago, Dr. Bruce Rowell, chief clinical officer at Lawndale Christian Health Center, identified one of the victims to reporters as Dr. Jerry Umanos, a pediatrician who worked at the hospital.

"Today we have lost a very, very dear friend and devoted colleague," Rowell said at a late-morning press conference.

Umanos' wife, Jan Schuitema, asked that in her husband's memory, people open their hearts to the Afghan people.

"We don't hold any ill will towards Afghanistan in general or even the gunman who did this," she said speaking outside the family's home in Chicago Thursday, her son, Ben Umanos, by her side. "We don't know what his history is."

She said that Umanos went to Afghanistan because he saw the need there, she said.

The attacker was a member of the Afghan Police Protection Force assigned to guard the hospital, according to District Police Chief Hafiz Khan. The suspect was wounded, in custody, and Khan said investigators would work to determine the motivation. The nature of his injuries remained unclear.

A source told CBS News that all three of the Americans killed were doctors.

According to its website, the Cure International Hospital was founded in 2005 by invitation of the Afghan Ministry of Health. It sees 37,000 patients a year, specializing in child and maternity health as well as general surgery.

The Afghan capital has seen a spate of attacks on foreign civilians in 2014, a worrying new trend as the U.S.-led military coalition prepares to withdraw most troops by the end of the year.

It was unclear whether the Taliban were behind Thursday's shooting, though the insurgents have claimed several major attacks that killed foreign civilians this year -- an escalation after years of mostly targeting foreign military personnel and Afghan security forces.

In January, a Taliban attack on a popular Kabul restaurant with suicide bombers and gunmen killed more than a dozen people, while in March, gunmen slipped past security at an upscale hotel in the Afghan capital and killed several diners in its restaurant.

The hospital shooting is also the second "insider attack" by a member of Afghan security forces targeting foreign civilians this month.