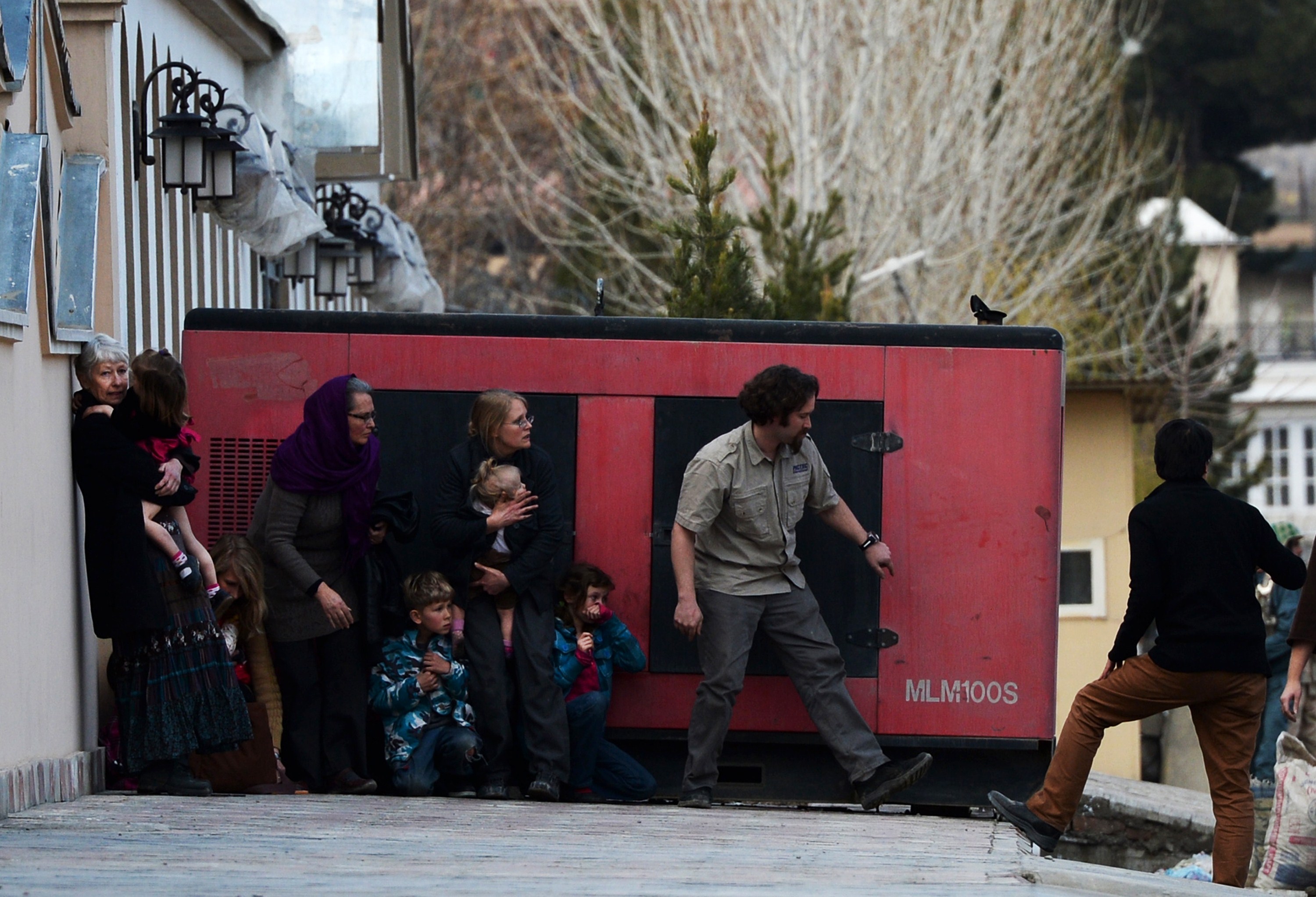 KABUL, Afghanistan -- Taliban militants attacked the residence of an American charity and a nearby day care center Friday in Kabul, sending foreigners - including women and children - fleeing the scene while Afghan security forces battled the gunmen holed up in the building. An Afghan girl and a driver were killed in the crossfire, officials said.

An uptick in bold attacks on foreigners in the Afghan capital suggests the Taliban are shifting tactics to focus on civilian targets that aren't as heavily protected as military and government installations as part of an overall surge in violence ahead of April 5 elections. CBS News' Ahmad Mukhtar reports this is the third complex attack in Kabul in less than one week.

It also appears aimed at sending a message that the U.S. and its allies aren't wanted as the Obama administration presses the Afghan government to sign a security agreement that would allow thousands of international troops to stay after the NATO-mandated combat mission ends in December.

The assault Friday evening began in a way typical of the Taliban, which claimed responsibility for it in a statement. A suicide car bomber detonated his explosives in front of the four-story building housing workers with the California-based Roots of Peace, then four gunmen rushed into the compound.

Roots of Peace said the organization's guards pursued the attackers into the house and killed two of them, while four foreigners - two Americans, a South African and a Malaysian - took cover inside. Two foreigners went to the roof while the other two hunkered down in their rooms, the group's president Gary Kuhn said.

One man survived by hiding in the closet with clothes pulled over himself, even after a grenade was thrown in his room, Kuhn said in an email from his office in San Rafael, California.

Kuhn said an adjacent day care center filled mainly with the children of foreigners also was hit, although it was unclear if it was actually targeted.

About two dozen foreigners, including women and children, were evacuated from the day care center, which is not connected with Roots of Peace.

Taliban spokesman Zabihullah Mujahid said insurgents attacked a "guest house of foreigners and a church of foreigners" and vowed in a statement that "we will keep on killing foreigners."

Kuhn said he didn't have more details about the neighboring building, which is separated by a wall. He said only that "it's a day care center that does have Christian religious services." Kuhn and his wife, Heidi, had planned to travel to Kabul next week with their son.

Besides the suicide bomber, four gunmen also had been killed, ending the standoff at about 8 p.m, Afghan Interior Ministry spokesman Seddiq Seddiqi said.

Deputy Interior Minister Mohammed Ayub Salangi said an Afghan girl who happened to be nearby was killed during Friday's battle. Seddiqi said an Afghan woman and a driver had died. The discrepancy couldn't immediately be resolved.

Roots of Peace, founded by the Kuhns in 1997 after Heidi Kuhn survived cancer, is currently running two multi-year USAID backed projects in Afghanistan to help farmers shift crops from lower value food like wheat to more lucrative crops like almonds, grapes and pomegranates. They are also supporting grape producers and assisting Afghanistan's Ministry of Agriculture, Irrigation and Livestock.

In past years the group, which employees 350 people in Afghanistan and works in all 34 provinces, has worked to clear land mines from farm land.

Mohammed Sadi, a resident in the area, said the force of the explosion rattled buildings several blocks away and broke windows in his house. "Then gunfire started and the police blocked all the roads," he said.

The upscale neighborhood is home to some of the candidates in next month's elections for president and provincial council. It didn't appear that they were the targets, although the Taliban have stepped up their attacks ahead of the April 5 polling.

The U.S. Embassy in Kabul condemned the attack "on an organization that only seeks to help Afghans improve their lives and livelihood."

It was the latest in a series of high-profile attacks targeting places long considered safe havens for Westerners in the country.

Gunmen slipped through security last week into a luxury hotel in Kabul with pistols and ammunition hidden in their shoes, then opened fire, killing nine people, including two Afghan children, who were dining in the restaurant.

A Swedish journalist also was shot to death on the street in a relatively affluent area earlier this month, and a Lebanese restaurant popular with foreigners was attacked by a suicide bomber and gunmen in January.