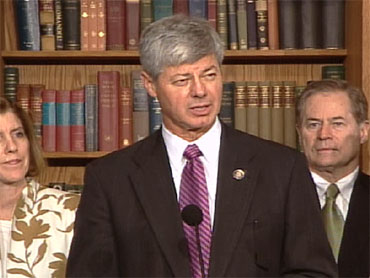 An unknown person on the Republican side yelled out "baby killer" while Rep. Bart Stupak (D-MI) was speaking on the House floor Sunday evening.

Stupak announced Sunday afternoon that he would back the Senate bill despite his strong opposition to abortion rights. He had previously indicated that he would not vote for the bill because he believed it did not guarantee that there would be no taxpayer funding for abortions.

His change of heart came as President Obama agreed to release an executive order backing up the existing ban on taxpayer funding for abortion. The White House released the executive order minutes before Stupak announced his decision.

Stupak was the leader of a coalition of roughly six like-minded Democrats who decided to support the bill, which passed by just three votes.

It is not yet known whether it was a member of the House or someone in the gallery who shouted out the comment. Politico, which provided the video at left, reports that "reporters in the House chamber said the 'baby killer' shout seemed to come from a group of lawmakers that included Rep. John Campbell (R-Calif.), but he said it wasn't him."

Some people know who it is but won't say," the lawmaker said.

Stupak was speaking after the Senate bill passed and Republicans moved to quash the bill, citing in part the abortion issue.