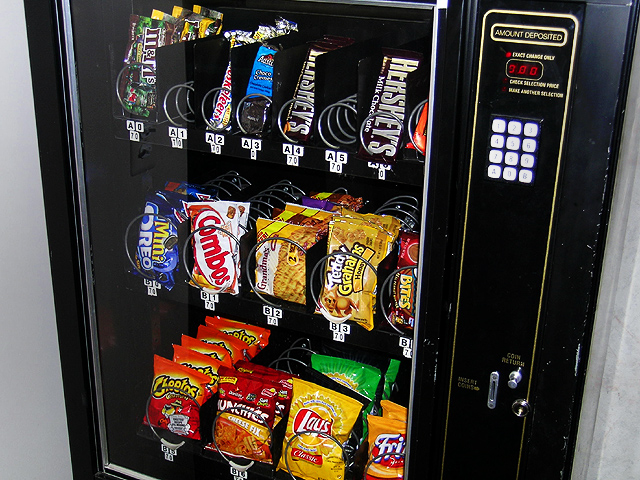 (CBS/AP) Snacks sold in vending machines at schools may soon be getting healthier under the government's ongoing plan to raise a healthier generation. Now, a new study provides what experts are calling the first evidence that laws that curb the sales of junk food and sweetened drinks at school may play a role in slowing childhood obesity.

But even the researchers behind the study acknowledged that critics' cries of a "nanny state" and opposition by the snacking industry and schools in need of food processors' cash mean such laws to curb vending machine sales are no slam-dunk.

But if the laws have even a tiny effect, "What are the downsides of improving the food environment for children today?" asked Dr. David Ludwig, an obesity specialist at Harvard Medical School and Boston Children's Hospital. "You can't get much worse than it already is."

The effects weren't huge, and the study isn't proof that the laws influenced kids' weight. But the results raised optimism among obesity researchers and public health experts who generally applaud strong laws to get junk food out of schools.

"This is the first real evidence that the laws are likely to have an impact," said Dr. Virginia Stallings, director of the nutrition center at Children's Hospital of Philadelphia. Stallings chaired an Institute of Medicine panel that urged standards for making snack foods and drinks sold in schools more healthful but was not involved in the new research.

For the study, researchers analyzed data on 6,300 schoolchildren in 40 states. Their heights and weights were measured in spring 2004, when they were finishing fifth grade and soon to enter middle school, and in 2007, during the spring of eighth grade. The researchers also examined several databases of state laws on school nutrition during the same time. The states were not identified in the study because of database license restrictions that protect the students' confidentiality, the authors said.

The laws were aimed at restricting the food and drinks sold in public school vending machines and school stores, outside of mealtime. Laws were considered strong if they included specific nutrition requirements, such as limits on sugar and fats and were rated weak if the requirements were vague and merely urged sales of "healthy" food without specifics.

The results show that for these laws to be effective, they need to be consistently strong in all grades, said lead author Dr. Daniel Taber, a health policy researcher at the University of Illinois at Chicago.

Recent data suggest that almost 20 percent of elementary school children nationwide are obese, and the rate among teens is only slightly lower. Since 1980, obesity prevalence among children and adolescents has almost tripled, according to the Centers for Disease Control and Prevention.

In states with consistently strong laws in elementary and middle school, almost 39 percent of fifth-graders were overweight when the study began; rates fell to 34 percent in eighth grade.

Mark Glickman, a health policy researcher at Boston University's School of Public Health, said the study design makes it difficult to reach any convincing conclusions. It's possible, for example, that stronger laws might be more prevalent in Democratic-leaning states with better-educated residents, and less obesity. But the study authors said they found stronger laws in states that had high levels of obesity.

The authors accounted for gender, race, income and school location.

Taber noted that several Southern states have been the most aggressive at targeting school junk food, "probably because they have the highest rates of obesity."

Ludwig, the Boston obesity specialist, praised the researchers for trying to "tackle a complicated question."

"The challenge is that there are a great many factors that coalesce to influence body weight," Ludwig said. "Disentangling these influences and looking at the independent effects of just one is a methodological nightmare."

In January, the USDA announced the first changes to the National School Lunch and Breakfast programs in nearly 15 years. The federally-assisted program that helps feed more than 31 million kids will serve healthier fare this school year by placing minimum daily requirements on the amount of nutritious dark green, red or orange vegetables that kids eat. More whole-grain rich foods will be offered, and there will be reductions in the amount of saturated fats, trans fats and sodium.

USDA Secretary Tom Vilsack told HealthPopearlier this year that the next phase of the plan would be to make vending machines and other a la carte foods healthier to "send a consistent message."