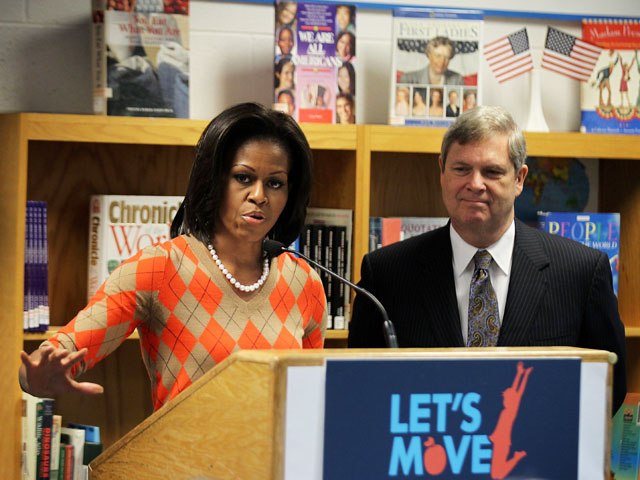 (CBS) Let's Move! - the Obama administration's campaign to fight childhood obesity - celebrates its second birthday today and according to Tom Vilsack, Secretary of the U.S. Department of Agriculture, the campaign is doing what it's supposed to do.

"For the first time in a long time, we did not see a rise in obesity rates," Vilsack told HealthPop.

The campaign kicked off two years ago in the hopes of raising a future generation of American children who eat healthier and exercise more than their predecessors. "The physical and emotional health of an entire generation, and the economic health and security of our nation is at stake," First Lady Michelle Obama said at the program's launch on February 9, 2010.

Current estimates suggest 17 percent of American children and teens are overweight and obese - that's triple the rate of a generation ago, according to the CDC.

Since Let's Move! has sprung into action, several new measures to combat those rates have been launched, including the unveiling of the MyPlate icon that replaced the pyramid, as well as the Healthy, Hunger-Free Kids Act that President Barack Obama signed into law in December 2010, which led to healthier school lunch standards for the 32 million schoolchildren who participate in the National School Lunch and Breakfast programs.

The flattening of the steady increases in obesity rates is promising and the good news, according to Vilsack, is the country is moving forward on a number of fronts to improve children's nutrition in ways that are consistent with recommended dietary guidelines.

One of those fronts is the June unveiling of the the MyPlate icon to replace the nutritional pyramid, variations of which have been around since 1992. The new design incorporates key dietary messages about portion size, and how much of your plate should contain whole grains and vegetables.

Vilsack said the plate has also been well-received since its inception as an easier to understand icon, since all you have to do is look at the plate to see what constitutes a balanced meal. As opposed to the pyramid, which required you to read the small print and figure out how many cups of certain foods were recommended.

Another highlight was the new standards for school meals, which were unveiled by Ms. Obama, Secretary Vilsack, and celebrity chef Rachel Ray, in January.

The plan has already rolled out at thousands of schools, and in order to make sure kids are actually eating healthier foods, the USDA has engaged chefs from around the country to create recipes, in addition to launching a nationwide recipe contest, he said.

The next phase of the plan will be to make vending machine snacks and other "a la carte" foods sold at school healthier.

"The key is to send a consistent message," Vilsack told HealthPop. "We want the healthy choice to be the easy choice." Expect to see more fruit slices and yogurt and less junk food, he said.

Also in store for 2012, Vilsack hopes to expand the number of schools involved in these programs. The program started at 650 schools and now includes 2,100. The challenge will be to increase this number, he said, to ensure more kids have improved nutrition and physical activity. Reimbursement programs that provide incentives to schools that meet the standards may help.

Not only that, but the challenge will be to get kids to eat healthier out of school, so the USDA is working with not-for-profits and faith-based organizations that run summer camps and extracurricular programs to get their nutritional standards up to par for meals and snacks.

For more information on the campaign, visit Let's Move!

Also, visit the USDA's SuperTracker to create a personalized food and fitness plan.