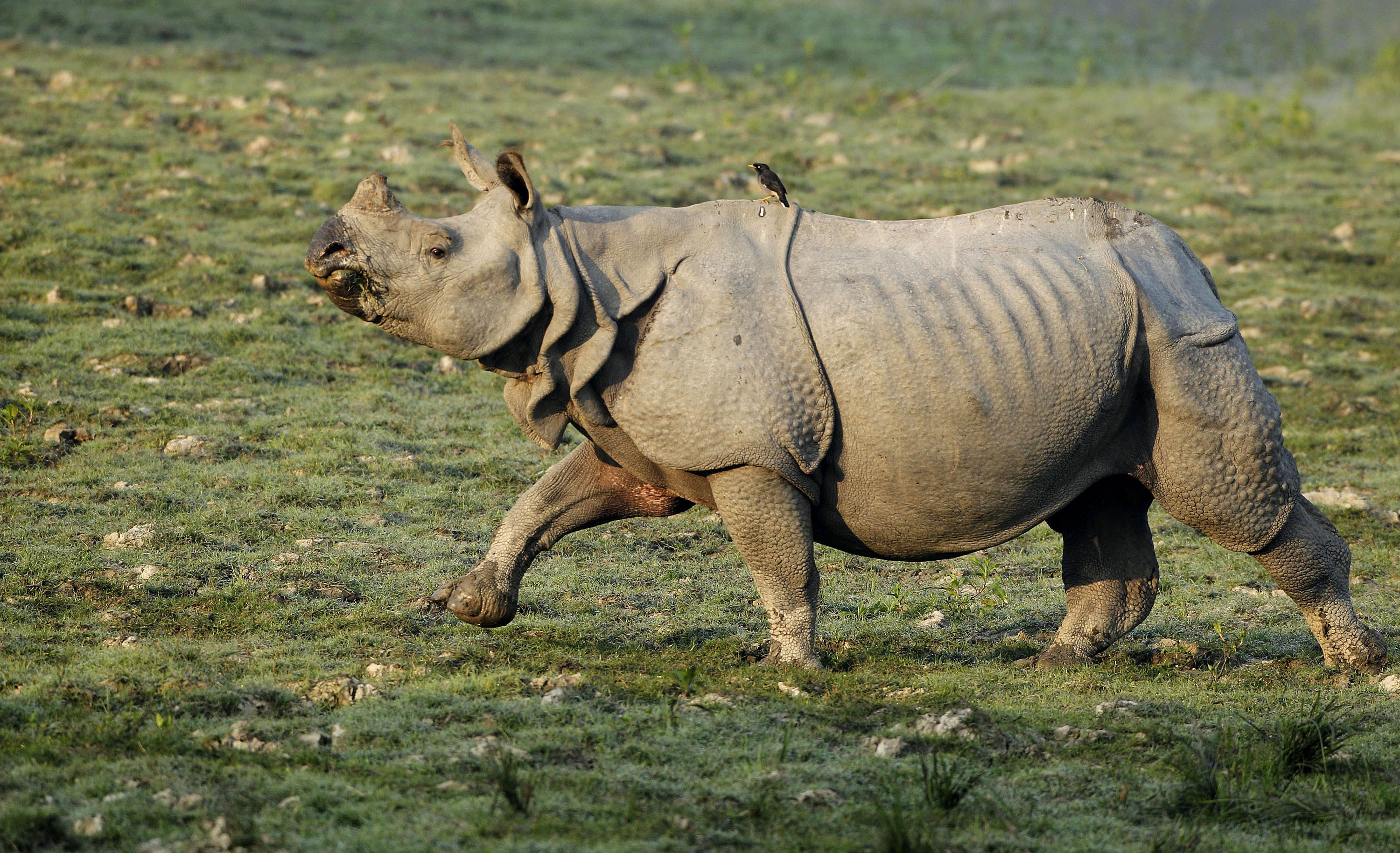 KAZIRANGA, India Out of the early morning mists and tall grass of northeast India emerges a massive creature with a dinosaur-like face, having survived millions of years despite a curse -- literally on its head. As elephant-borne riders approach, the formidable hulk sniffs the air for danger, then resumes its breakfast.

This is Kaziranga, refuge to more than 2,200 endangered Indian rhinoceros and one of the world's best-protected wildlife reserves. But even here, where rangers follow shoot-to-kill orders, poachers are laying siege to "Fortress Kaziranga," attempting to sheer off the animals' horns to supply a surge in demand for purported medicine in China that's pricier than gold. At least 18 rhino fell to poachers in and around the park in 2012, compared to 10 in all of India in 2011.

Insurgents eager to bolster their war chests here in India's Assam state are also involved, according to police. Authorities are investigating a recent news report that a Chinese company offered two rebel groups a deal: weapons in exchange for horns and body parts of the one-horned species whose scientific name is rhinoceros unicornis.

Pitted against the poachers, some armed with battlefield rifles, are 152 anti-poaching camps staffed by more than 900 rangers, guards and other personnel - almost one for every square kilometer of the reserve. These include a well-armed task force rushed in when the poaching erupted again early last year. Kaziranga also is ready to deploy drones and satellite surveillance to track the intruders.

The rhino war is a bloody one on all counts. A number of guards have been killed along with 108 poachers since 1985 while 507 rhino have perished by gunfire, electrocution or spiked pits set by the poachers, according to the park. More than 50 poachers were arrested last year.

"It's highly organized crime where someone comes to buy, somebody supplies the arms, someone comes as a shooter and local field men help them," says veteran park chief N.K. Vasu, as a nighttime operation that nets one poacher gets under way. "If mobilization had not occurred there would have been widespread killings."

Reflecting the globalization of wildlife trafficking, the accelerating slaughter for China's market occurs wherever one of the world's oldest and largest mammals are found, especially in southern Africa. In South Africa alone, more than 630 rhinos fell to poachers last year, up from 13 in 2007, according to the country's Department of Environmental Affairs.

Driving the killings are soaring prices that China's growing, moneyed class are willing to pay -- up to $65,000 per kilogram ($30,000 per pound). This has even forced museums in Europe where thefts have occurred to replace real rhino horns with fakes.

Behind it is a deeply rooted belief among many Chinese that rhino horn - basically compressed hair - can cure everything from rheumatism to cancer, despite admonitions by most medical experts that it has "about as much medicinal value as chewing one's fingernails." The product has been struck from the list of officially approved Chinese traditional medicines but is readily available in China and Vietnam, the second largest consumer.

To date, experts say Asian countries have proved better at protecting their rhinos than Africa, where most of the China-bound horns originate before being smuggled mainly through Southeast Asia by air, land and sea.

"The bosses of criminal syndicates which control the trafficking go where the cost of business is very low, and that's now in Africa," says Christy Williams of the World Wide Fund for Nature. "If Africa starts to really crack down, then they'll be moving back to Asia. People are always ready to poach rhino. They are only waiting for an opportunity, for the protection to go down."

Kaziranga park statistics since 1980 reflect this ebb and flow, stemming from both demand and the level of protection afforded.The 1990s saw intensive poaching with a high of 48 rhinos killed in 1992. It subsided after 1998 but shot up again this year.

Williams, who is based in Nepal, says Asian smuggling routes run from India through Nepal to Tibet and into other regions of China or through northern Myanmar to China. "Beyond, when it heads into Tibet, it's a black hole," he says.

China has in the past supported an array of insurgent groups in Assam and other areas of India's northeast that have sought independence from India, and growing economic and transport links are facilitating wildlife trafficking.

Last month, Seven Sisters Post, an English-language newspaper in Assam, reported that the United Liberation Front of Assam and another rebel group have been approached several times by the Longhui Pharmaceutical Company, a subsidiary of arms manufacturer Hawk Group, to supply rhino parts in exchange for weapons, something the groups claim they rejected. The web site of Longhui, based in Hainan province, says the company produces rhino horn medicine through "shaving alive rhino horn technology."

J.N. Choudhury, Assam's police chief, declined to comment on the report, which the government is investigating, but said members of the Karbi Longri NC Liberation Front have been arrested in recent weeks on charges of rhino poaching in and around Kaziranga. News reports say other rebel groups are also involved.

Despite such threats both Assam and Nepal -- homes to the densest rhino populations in Asia - have notched impressive records in curbing poaching. Rhino tourism in both countries brings in considerable revenue, and the animal is an Assamese icon with the recent spate of poaching sparking a public outcry.

Kaziranga itself is regarded as one of the world's great wildlife conservation victories. From some 20 rhino at the beginning of the 19th century - when maharajas and British colonials shot them by the scores - it now faces the problem of overpopulation.This Asian Eden also shelters healthy numbers of tigers, elephants, the highly endangered swamp deer and some 500 species of birds.

To keep it that way, Vasu says it's essential to "dominate every inch of the ground" inside the park and link up with area police and civil authorities, a weakness in the past along with continuing corruption.

"In one hour you are set for life," says Polash Bora, a naturalist who has worked in the park for 21 years, referring to the temptation for park guards to abet poaching. He also notes trafficking kingpins rarely get caught in India's northeast because of their connections with police and other authorities.

But overall, Kaziranga's green front line has drawn widespread praise, patrolling around the clock, living in lonely camps, until recently drawing low pay and regularly attacked, sometimes killed, by tigers, wild buffalo and rhino because they are forbidden to shoot wildlife. The poachers they encounter now wield sophisticated weapons and communications.

"It's hard to catch them, especially since they come at night. You hear a gunshot and in five minutes they cut off the horn and run away into the tall grass and jungle," says P.K. Barua, a veteran ranger at a four-man camp deep inside the park. When they use silencers on their guns, a recent development, a dead rhino may not be discovered for days.

"You only know that one has been killed when you see the vultures circling overhead," he says.