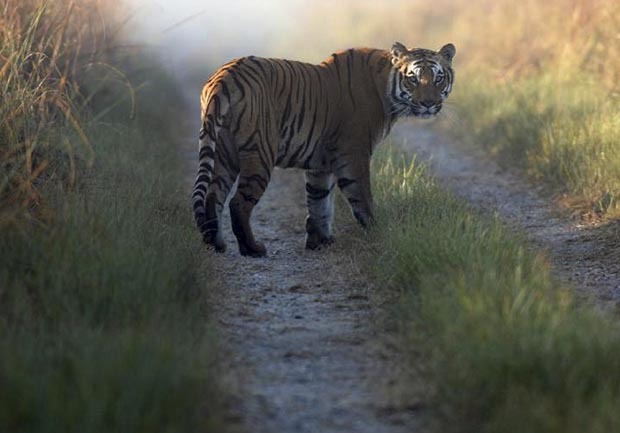 (AP) NEW DELHI - A state in western India has declared war on animal poaching by allowing forest guards to shoot hunters on sight in an effort to curb rampant attacks on tigers and other wildlife.

The government in Maharashtra says injuring or killing suspected poachers will no longer be considered a crime.

Forest guards should not be "booked for human rights violations when they have taken action against poachers," Maharashtra Forest Minister Patangrao Kadam said Tuesday. The state also will send more rangers and jeeps into the forest, and will offer secret payments to informers who give tips about poachers and animal smugglers, he said.

No tiger poachers have ever been shot in Maharashtra, though cases of illegal loggers and fishermen being shot have led to charges against forest guards, according to the state's chief wildlife warden, S.W.H. Naqvi.

But the threat could act as a significant deterrent to wildlife criminals, conservationists said. A similar measure allowing guards to fire on poachers in Assam has helped the northeast state's population of endangered one-horned rhinos recover.

"These poachers have lost all fear. They just go in and poach what they want because they know the risks are low," said Divyabhanusinh Chavda, who heads the World Wildlife Fund in India and is a key member of the National Wildlife Board, which advises the prime minister. In many of India's reserves, guards are armed with little more than sticks.

India faces intense international scrutiny over its tiger conservation, as it holds half of the world's estimated 3,200 tigers in dozens of wildlife reserves set up since the 1970s, when hunting was banned.

Illegal poaching remains a stubborn and serious threat, with tiger parts in particular fetching high prices on the black market because of demand driven by traditional Chinese medicine practitioners.

According to the Wildlife Protection Society of India, 14 tigers have been killed by poachers in India so far this year — one more than in all of 2011. The tiger is considered endangered, with its habitat shrinking more than 50 percent in the last quarter-century while its numbers declined from an estimated 5,000-7,000 in the 1990s, according to the International Union for Conservation of Nature.

Eight of this year's tiger poaching deaths in India occurred in Maharashtra, including one whose body was found last week chopped into pieces with its head and paws missing in Tadoba Tiger Reserve. Forest officials have also found traps in the reserve, where about 40 tigers live.

Naqvi said encounters between Maharashtra's forest guards and poachers were rare because poachers generally hunt the nocturnal big cats at night. He said the state's offer to pay informers from a new fund worth about 5 million rupees ($90,000) would likely be more effective. "We get very few tips, so this will really help," he said.

But conservationists said the fact that poachers are rarely seen has more to do with low ranger numbers, and that increasing patrols around the clock would help.

Dozens of other animals are also targeted by hunters across India, including one-horned rhinos and male elephants prized for their tusks, and other big cats like leopards hunted or poisoned by villagers afraid of attacks on their homes or livestock.

A recent study on hunting in India noted 114 species of mammals were being actively hunted across the country, with dozens of birds and reptiles also under attack.

"There has been an onslaught going on in India," said William Laurance, a conservation biologist at James Cook University in Australia and one of the three authors of the study, which was published in Biological Conservation journal in April. "It's a serious threat to wildlife, along with habitat encroachment and forest degradation. A lot of species are clinging to survival in remote areas."

It's unclear whether Maharashtra's example in targeting poachers will be followed by other states, though tiger poaching has also been a major problem in Rajasthan and Madhya Pradesh in recent years. The hunting of male elephants for their tusks has skewed the sex ratio, and there are now about 100 female elephants for every male in the south.

According to the April study, some of the most rampant hunting is occurring in the eastern Himalayas, where high numbers of army troops are deployed and some hunt for sport, and in the northeast near the porous border with China and Myanmar, where hunting is a way of life and sometimes an economic necessity for tribal communities.

"The remarkable thing in India is that there is still anything alive at all with 1.2 billion people," Laurance said. "As populations grow, an increase in hunting pressure is a classic thing that happens."