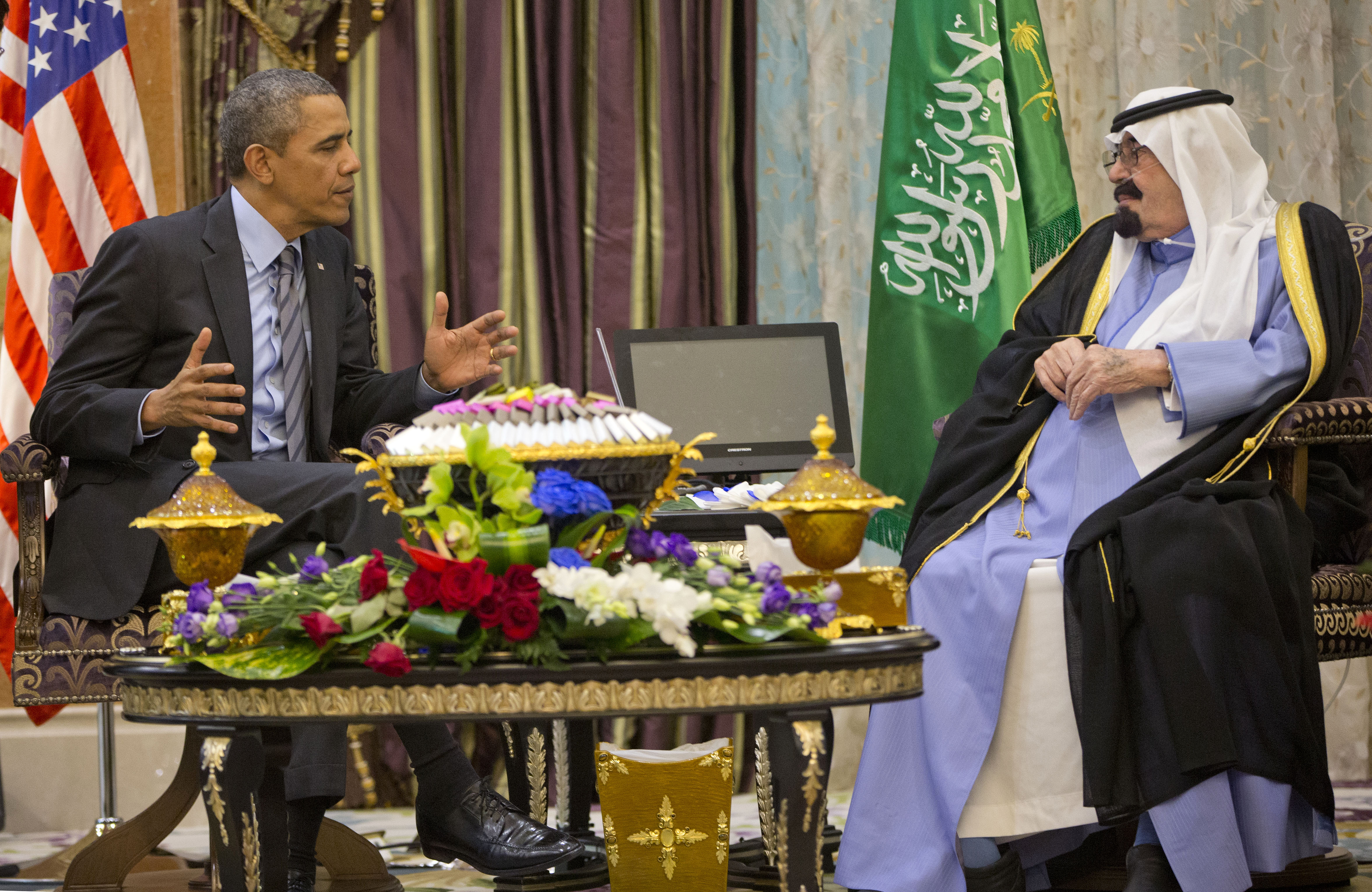 RIYADH, Saudi Arabia -- President Barack Obama paid a visit Friday to the desert oasis of wary ally King Abdullah of Saudi Arabia, hoping to reassure the aging monarch who is nervously watching Washington's negotiations with Iran and other U.S. policy in the Middle East.

Obama's Marine One helicopter kicked up clouds of sand in his arrival at the king's desert camp outside the capital of Riyadh for a meeting and dinner with Abdullah. The president walked through a row of military guards to an ornate room featuring a massive crystal chandelier and took a seat next to the 89-year-old king, who was breathing with the help of an oxygen tank.

Secretary of State John Kerry sat at Obama's side for the visit that is the president's third official meeting with the king in six years.

Despite its decades-long alliance with the United States, Saudi's royal family has become increasingly anxious in recent years over Obama's nuclear talks with Iran and his tepid involvement in the Syrian civil war. During his evening meetings with the king, Obama's task was to reassure Saudi Arabia that the U.S. is not abandoning Arab interests despite troop withdrawals from Iraq and Afghanistan, greater energy independence back home and nuclear talks with predominantly Persian Iran.

White House officials and Mideast experts say the Saudi royal family's main concern is Iran. They fear Iran's nuclear program, object to Iran's backing of the Bashar Assad regime in Syria and see the government of Tehran as having designs on oil fields in Saudi Arabia and Bahrain.

Deputy national security adviser Ben Rhodes told reporters aboard Air Force One on the flight to Saudi Arabia that the issues at the heart of Obama's meetings with Abdullah include Gulf security, Middle East peace, Syria, Iran and Egypt.

On Syria, Rhodes said Obama did not plan to make any specific announcements about additional assistance to opposition forces. He said the U.S. and Saudi Arabia have been working together closely to coordinate their assistance to the rebels.

Rhodes said that coordination has helped put the U.S. relationship with Saudi Arabia "in a stronger place today than it was in the fall when we had some tactical differences about our Syria policy."

"We are in a better place today than we were seven months ago," Rhodes said.

Obama angered Saudi officials by scrapping plans to launch a military strike against Syria, choosing instead to back a plan to strip Syrian President Bashar Assad of his chemical weapons.

Still, in a move that could smooth over the disagreement between the two countries, the Obama administration is considering allowing shipments of new air defense systems known as "manpads" to Syrian rebels, a U.S. official said Friday.

Allowing manpads to be delivered to Syrian rebels would mark a shift in strategy for the U.S., which until this point has limited its lethal assistance to small weapons and ammunition, as well as humanitarian aid. The U.S. has been grappling for ways to boost the rebels, who have lost ground in recent months, allowing Syrian President Bashar Assad to regain a tighter grip on the war-torn nation.

The actual manpad shipments could come from the Saudis, who have so far held off sending in the equipment because of U.S. opposition.

The president is not expected to announce a final decision on the matter during his overnight trip to the Gulf kingdom. U.S. and Saudi intelligence officials have been discussing the possibility of injecting manpads into the crisis for some time, including during a meeting in Washington earlier this year.

As recently as February, the administration had said Obama remained opposed to any shipments of manpads to the Syrian opposition. The U.S. has been concerned that the weaponry could fall into the wrong hands and possibly be used to shoot down a commercial airliner.

Among the reasons for Obama's shift in thinking is the greater understanding the U.S. now has about the composition of the Syrian rebels, the official said. However, the official added, the president continues to have concerns about escalating the fire power on the ground in Syria, which has been torn apart by more than three years of civil war.

The official wasn't authorized to discuss the internal deliberations by name and insisted on anonymity.

Rhodes said Obama would also update the king on the nuclear talks with Iran. He said Obama would also make the point that those negotiations do not mean U.S. concerns about other Iranian activities have lessened, including its support for Assad and Hezbollah, as well as its destabilizing activity in Yemen and the Gulf.

"Those concerns remain constant and we're not in any way negotiating those issues in the nuclear talks," he said.

Rhodes said human rights, including women's rights, would be on the agenda for Obama's meetings. But he said the U.S. has a broad range of security interests with Saudi Arabia that would be most prominent on the agenda.

"We've raised concerns around human rights issues, issues related to women's rights," Rhodes said, adding that the U.S. has to maintain "the ability to cooperate" with the Saudis on other issues.

The Saudi anxieties have been building over time, according to Simon Henderson, a fellow at The Washington Institute, a think tank focused on Middle East policy.

"Ever since Washington withdrew support for President (Hosni) Mubarak of Egypt in 2011, Abdullah and other Gulf leaders have worried about the reliability of Washington's posture toward even longstanding allies," Henderson wrote this week. "President Obama's U-turn on military action against Syria over its use of chemical weapons last summer only added to the concern, which has likely morphed into exasperation after recent events in Crimea, where the Saudis judge that President Obama was outmaneuvered by Vladimir Putin."

The technological advances that have increased oil and gas production in the United States have also made Gulf states nervous, said Tamara Cofman Wittes, a senior fellow at the Brookings Institution and director of its Saban Center on Middle East Policy

"A lot of people in the region, I think, are naturally asking themselves what America's energy independence means for America's willingness to invest in the security of energy and supply from the Gulf," she said.

Friday's talks also come in the aftermath of Saudi Arabia's refusal to grant a visa to the Washington bureau chief of The Jerusalem Post who had sought to cover Obama's trip. Rhodes told reporters that the U.S. government reached out to Riyadh to intervene but to no avail.