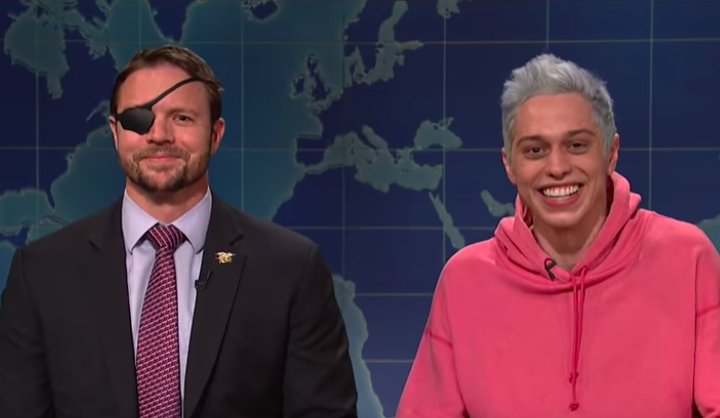 NEW YORK — Pete Davidson apologized to a Navy SEAL veteran for mocking his war wound on "Saturday Night Live," and the vet himself appeared to poke fun at the comedian in return.

Davidson came under harsh criticism for comments on last week's Weekend Update for joking about an eyepatch worn by Dan Crenshaw, a retired lieutenant commander in the Navy SEALs from Texas who won his House race in Tuesday's midterm elections. Crenshaw lost an eye in an IED blast in Afghanistan on his third combat tour.

On Saturday's "SNL," Davidson returned to Weekend Update and offered an apology for the jibe.

"In what I'm sure is a huge shock for people who know me, I made a poor choice last week," Davidson said. "I made a joke about Lt. Com. Dan Crenshaw, and on behalf of the show and myself, I apologize ... I mean this from the bottom of my heart. It was a poor choice of words. The man is a war hero, and he deserves all the respect in the world."

Crenshaw wheeled into frame, thanking Davidson for "making a Republican look good." His phone then rang to the tune of "Breathin" by pop star Ariana Grande, who was engaged to Davidson until the two split in October.

Crenshaw took the opportunity to make fun of a photo of Davidson: "He looks like if the meth from 'Breaking Bad' was a person."

The incoming congressman ended by encouraging viewers to remember the sacrifices of those who served on Veterans Day weekend.

"Maybe say, 'Thanks for your service.' I would actually encourage you to say something else. Tell a veteran, 'Never forget,'" Crenshaw said. "When you say 'never forget' to a veteran, you are implying that, as an American, you are in it with them. Not separated by some imaginary barrier between civilians and veterans, who will never forget the sacrifices made by veterans past and present."