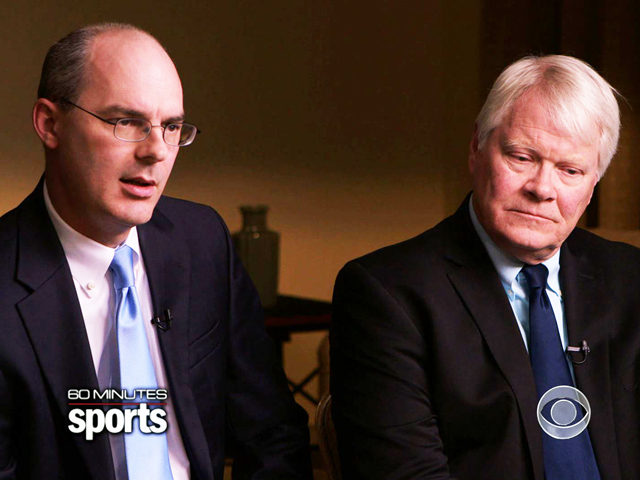 (CBS News) NEW YORK -- The two men who prosecuted the child sex-abuse case at Penn State are speaking about it for the first time in an interview with "60 Minutes Sports."

It was college football's darkest episode. Former assistant coach Jerry Sandusky was convicted of abusing 10 boys; he'll likely spend the rest of his life in prison. But serious questions remain.

Frank Fina, the Chief Deputy Attorney General for Pennsylvania, was the architect of the case against Sandusky. Joseph McGettigan III was the hammer, a seasoned no-nonsense prosecutor.

FRANK FINA: We've got a massive multi-billion-dollar entity that -- at the time -- we don't realize, although we would come to realize it, may not be fully committed to disclosing what the reality is. Of course we -- we come to realize that they're actively obstructing -- our investigation.

FINA: Yeah. And they had been for many years.

In a detailed independent investigative report commissioned by the Penn State board of trustees, former FBI Director Louis Freeh found Spanier, Schultz and Curley repeatedly concealed facts about the abuse from the authorities.

FINA: I think the evidence -- now they're gonna be tried on that. ... But I investigated that case. They deserve to be charged, and I hope justice will be served there.

KETEYIAN: Did you two ever look at each other and go, "I can understand if they're covering up recruiting violations. But this is serial sexual abuse of children that they are institutionally resisting efforts to uncover."

FINA: Many times. I mean, that that happened over and over again. I mean, it just -- just astonished --

MCGETTIGAN: You know what, there -- there -- some of the thinking on the simplest level, one of the simplest expressions of their thinking is, "Well, that was then. That was Jerry Sandusky. That was someone else. This is now. Let's move on. We are Penn State."

KETEYIAN: Do you believe that Coach Paterno was a part of the conspiracy to conceal -- to cover up the crimes at Penn State by Jerry Sandusky?

FINA: I do not. And -- and I -- I'm viewing this strictly on the evidence, not any kind of fealty to anybody. I did not find that evidence.

FINA: Well, that's right. And I don't see any need to judge him beyond his own words. He said it best: "I didn't do enough. I should have done more."

Spanier, Schultz and Curley have vigorously denied taking part in any cover-up and argued they were never informed Sandusky had committed any sexual abuse. They are due to stand trial on charges of perjury and other related crimes sometime next year.