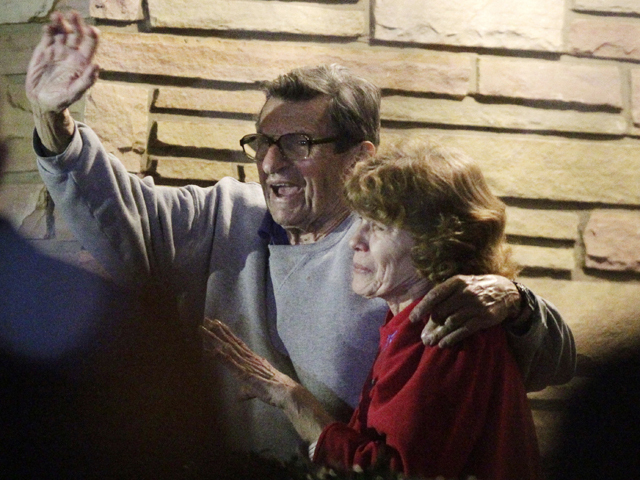 HARRISBURG, Pa. Joe Paterno's widow said Wednesday that she and her husband were ignorant about sexual predators like Jerry Sandusky and did not realize that the former Penn State assistant football coach was abusing the boys he met through a children's charity that he founded.

"We have been unaware of how a predator behaves," Sue Paterno said at a program celebrating Child Abuse Awareness Month in Pennsylvania. "In many cases, we unknowingly helped him `groom' his victims while we thought we were helping a child achieve self-esteem and find a better life."

Mrs. Paterno said she was horrified when she learned the truth about Sandusky after his arrest in November 2011.

Her husband, a College Football Hall of Fame coach who led the Penn State's Nittany Lions for 46 years, died in January 2012 at 85.

"The last 17 months have been filled with disbelief, horror, the pain of loss, sleepless nights, praying for the victims and for peace of mind for those who unwittingly were too naive to recognize the signs of abuse," she said.

Jay Paterno, one of the couple's five children, also spoke at the breakfast gathering sponsored by the Pennsylvania Family Support Alliance.

The group's executive director, Angela Liddle, acknowledged that some members questioned the choice of the Paternos as speakers, but she defended the decision and described the family as "good folks."

Aninternal probe led by former FBI director Louis Freehand completed in July accused Joe Paterno and three former Penn State administrators of covering up an abuse allegation about Sandusky more than a decade ago in an attempt to shield the university from bad publicity. Paterno was fired by the university trustees days after Sandusky was charged.

The Paterno family has vehemently denied that Joe Paterno had any knowledge about Sandusky's crimes against children.

Last month, a documentary filmmaker who recorded a jailhouse interview with Sandusky said that he believes Paterno was "railroaded" in the investigation and conviction of Sandusky for child sexual abuse.

In excerpts of the interview broadcast on NBC, Sandusky was asked if he thought Paterno would have allowed him to continue to coach if he suspected him of being a pedophile. Sandusky replied: "If he absolutely thought I was [a pedophile], I'd say no. If he has a suspicion, I don't know the answer to that."

Sandusky, 69, is serving a 30- to 60-year prison sentence after being convicted last year of 45 counts of child sexual abuse involving 10 boys over a period of years. He maintains his innocence and is pursuing appeals.

The Second Mile, the charity where prosecutors say Sandusky met most if not all of his victims, is still functioning but received a judge's permission in March to sell its State College headquarters for $650,000.

A February report commissioned by the family portrayed Paterno as the victim of a "rush to injustice" spawned by the university-financed internal probe. Dick Thornburgh, the former U.S. attorney general and former Pennsylvania governor, was among the people assembled to review Freeh's findings.

Freeh has said he stands by his report. It concluded that Paterno and the university's former president Graham Spanier, former athletic director Tim Curley and retired vice president for business and finance Gary Schultz concealed critical information and "failed to protect against a sexual predator harming children for over a decade."

On Tuesday, the supervising judge of the grand jury whose findings resulted in charges against Spanier, Curley and Schultz rejected their pre-trial motions, allowing their criminal cases to move forward.