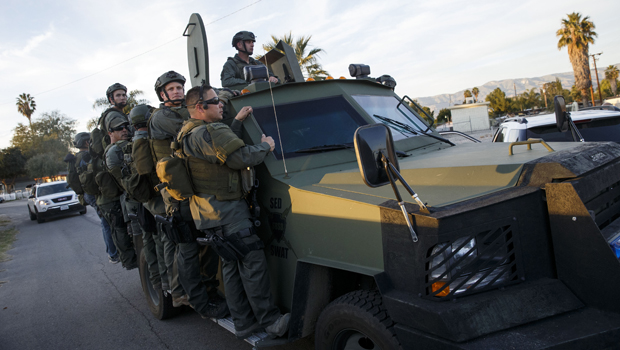 As police in Redlands, Calif., searched from house to house for suspects in Tuesday's mass shooting in San Bernardino, Americans at home watched something unusual: the tactical use of armored vehicles on a suburban street.

Even in a country that regularly experiences mass shootings, the need for either military or non-military armored personnel carriers -- known as MRAPs and Bearcats -- is rare, experts told 48 Hours' Crimesider Wednesday. The vehicles became infamous in 2014 after they were used to quell protests in Ferguson, Mo., sparking an outcry and leading President Barack Obama to issue an executive order in January limiting police access to certain military surplus equipment.

In California on Tuesday, they were used as most departments originally planned, to shield the police from people who had already killed and injured dozens, said Jim Bueermann, a former chief of the Redlands Police Department, and current president of the non-profit Police Foundation.

"That usage was exactly what those vehicles were intended to be used for. It was a way to get up to that SUV, where you had an armed person who had just killed a bunch of people, and was shooting at police," said Bueermann, whose organization provided recommendations to the White House before it issued its executive order.

But Bueermann said one massive military vehicle used Wednesday was out of place, even in a volatile scenario like the one police encountered on the streets of San Bernardino. It's called the MRAP, it's built to withstand a war zone, and it has been provided free-of-charge to some local police departments as part of a program that rids the military of surplus equipment.

"It's not most chiefs' first choice, but they're free," said Bueermann, who testified before the Senate in 2014 about the military's surplus program. "They're not really perfect for police work. Departments get them because they can't afford the hundreds of thousands for a Bearcat."

They also end up spending a lot to adapt them for police work, and to maintain them, said James Stewart, a former director of the National Institute of Justice. Both Stewart and Bueermann said in most places, armored trucks and SWAT teams should be shared among several police departments, instead of each town having its own military-style force.

"If you go to a small town and you have this gigantic thing, you'll find it's expensive just to maintain the tires. They dry out and crack, even when they're not in use" said Stewart who now directs public safety research for CNA Corporation, an Arlington, Va.-based nonprofit security research firm that advises military and government agencies. "You find it's a false economy to accept the military's sort of cast off equipment."

Bueermann said that "false economy" is what can cause police departments to overuse their armored equipment, leading to scenarios like the one seen in Ferguson, where SWAT teams road atop Bearcats, pointing their guns at protesters.

"You have an armored vehicle or SWAT, and you don't get a lot of use, you're going to get creative in how you use it, because your boss is going to ask why you're spending $80,000 a year," Bueermann said.

In the day after the San Bernardino attack, police officials as far away from California as Michigan and Virginia highlighted the use of armored vehicles, and criticized the president's executive order limiting their access by police.

But Bueermann said the order was "attempting to strike a balance between the needs of police and the uproar that was coming out of communities."

Among the order's mandates is that police departments have to first receive approval from local legislative bodies, before they can acquire military vehicles.

"If you can't explain to your community why you need a bearcat then you have a problem," Bueermann said.