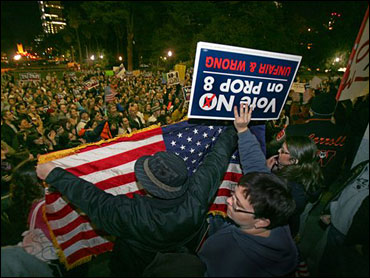 A year after the state Supreme Court entertained arguments on extending marriage to gay couples, many of the same lawyers will be back before the same justices this week arguing why California's voter-approved ban on same-sex marriage should stand or fall.

The passage of Proposition 8 last November changed the state constitution to prohibit gay marriage and trumped the high court's decision a few months earlier to legalize it. But the ballot measure was appealed and the justices on Thursday are getting the final word on whether marriage is an institution that must accommodate two women or two men.

The debate will be framed by not only the gay and lesbian couples who see their struggle as the modern equivalent of prohibitions on interracial marriage, but the 7 million citizens who rejected that comparison in an $83 million election.

The stakes are high - for the 18,000 couples who married while same-sex weddings were legal, for gay marriage opponents who object on religious grounds, and for others who are deeply divided on the issue. And whatever the court decides is likely to have ramifications not only for millions of Californians but also for other states grappling over gay marriage.

The question is whether a majority of the justices will defer to popular will or, having already declared that preventing gay people from marrying was unconstitutional, will do so again. Legal experts say it is a tough call and that the court's decision, due within 90 days, will be debated for years to come.

"It's very unusual for any kind of state court to do what the petitioners are asking the California Supreme Court to do," said William Eskridge, a Yale University constitutional law professor.

Same-sex marriage supporters are urging the court to overturn Proposition 8 on the grounds that the measure made such a sweeping change to the state constitution that its sponsors lacked the authority to put it on the ballot without approval from the California Legislature. Citizens can petition to put constitutional amendments, but not substantial revisions, directly to voters.

In a rare departure, the state's own top lawyer, Attorney General Jerry Brown, has refused to defend the initiative and is urging the justices to invalidate it. Brown says Proposition 8 itself is unconstitutional because the Supreme Court's 4-3 decision last year recognized gays as a minority group entitled to judicial protection and established marriage as a fundamental right.

Legal experts say Proposition 8, which won 52 percent of the vote, would almost certainly stand if not for one notable fact: the marriage amendment represents the first time in California history that the constitution was changed at the ballot box to deprive a protected minority group of a right expressly carved out by the court.

A broad spectrum of civil rights groups, including the NAACP, the Mexican American Legal Defense and Education Fund, and the National Organization for Women, have submitted friend-of-the-court briefs in the case, saying other minorities could have their rights put up for a vote if the measure is upheld.

Others, however, see just as much danger in limiting California's tradition of direct democracy.

Lynn Wardle, a Brigham Young University professor who submitted a brief in support of Proposition 8, said, "Do you defer to the political establishment, which in this case supports same-sex marriage and wants Prop. 8 undone, or to California's history of being probably the most populist state in America?"

In the 99 years since California has allowed constitutional changes by citizen initiative, the Supreme Court has tossed out only a handful of voter-approved measures because they were significant revisions that needed prior legislative approval.

On Thursday, the court also will hear arguments on what should happen to the estimated 18,000 same-sex marriages that were sanctioned in the state before Election Day, if the measure is upheld.

The sponsors of Proposition 8 argue the measure's language makes it clear the state can no longer recognize those marriages. The attorney general and lawyers for the couples and local governments say the initiative was not explicit enough to undo the unions.

Legal observers, even some gay marriage opponents, say they think the court may be reluctant to void existing marriages.

"There is no question, for a period of time, there was same-sex marriage in California, albeit a very short period of time," said James Sweeney, a constitutional lawyer who represents the California Catholic Conference.