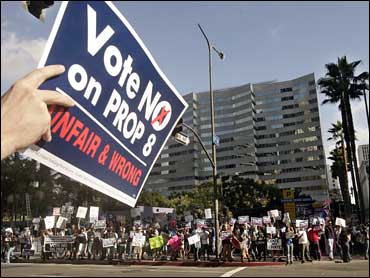 Amid the honks and cheers of joy in the Castro and West Hollywood, there are quiet signs of anxiety and, as state election results come in, a growing sense of anguish. Something is not right in the Golden State. Even as Californians gave 61 percent of their vote to Barack Obama, a majority of them, 52 percent, voted to discriminate against another kind of minority--gays and lesbians. For a brief window that began in the bridal month of June, California queers had the right to marry, thanks to a state Supreme Court ruling, and some 18,000 same-sex couples said "I do." Proposition 8--a ballot initiative that would amend the state Constitution to define marriage as between a man and a woman--now says "You can't!"

As I write, the results for the second most expensive campaign in the country after the presidency are not official. According to the No on 8 campaign, as many as 3 million to 4 million absentee and provisional ballots have yet to be counted, and gay activists are rightly refusing to concede until they are. But there is little reason to expect that those votes will tip the scales.

Other numbers paint an even grimmer picture. If exit polls are to be believed, some 70 percent of African-Americans voted Yes on 8, as did 52 percent of Latinos and 49 percent of Asians; each of these demographics went heavily for Obama, blacks by a 94-to-6 margin. Los Angeles County, heavily minority, went 50-50 on Prop 8. These results have shocked gay activists, who knew from earlier polls that black voters favored Prop 8, but they were seeing much smaller margins, closer to 50 percent.

The easy, dangerous explanation for this gap, and one already tossed around by some white gay liberals in the bitter aftermath, is that people of color are not so secretly homophobic. But a more complicated reckoning--one that takes into account both the organizing successes of the Christian right and the failures of the gay movement--will have to take place if activists want a different result next time. First, there's the matter of the Yes on 8 coalition's staggering disinformation campaign. Ad after ad told voters that without Prop 8, their churches would be forced to perform same-sex unions and be stripped of their tax-exempt status; that schools would teach their children to practice homosexuality; and, perhaps most effective, that a smiling Barack Obama had said, "I'm not in favor of gay marriage." This last bit went out in a flier by the Yes on 8 campaign, targeting black households.

Obama indeed does not favor gay marriage, as he said during the primary, but he also came out emphatically against Prop 8, as a late TV ad by the No on 8 campaign emphasized. Mainstream outlets like the Los Angeles Times meticulously countered the other lies as well, but too little, too late. They had taken root in many communities of color, and once lodged, proved difficult to dislodge.

This was always the intent of the Yes on 8 campaign. For years, the California Christian-right apparatus, long hampered by nativism and racism, had been unable to make inroads into the state's brown, yellow and black populations--a demographic gold mine in a state that is more than 50 percent minority and growing. Prop 8 may prove to be their gold rush. From the beginning they bought up ad space in Chinese, black, Spanish and Korean media; they hosted massive rallies for ethnic Christians. The Sunday before election day, I went to Los Angeles City Hall for the most celebratory, most diverse rally I have ever attended; it was organized by Yes on 8 Chinese advocates.

But it's only in an organizing vacuum that bald lies and racial pandering find room to thrive. Gay activists, by most accounts, were simply outmaneuvered. Andrea Shorter, a black lesbian volunteer for the No on 8 campaign, told me that the outreach to the African-American community began in earnest a week ago. "What's happened is that there's been an outcry from communities of color, including African-American communities, who say, 'Include us!' Now there's a GOTV strategy, but for some it seems last minute," she said in an interview before the election. Another No on 8 activist, Karin Wang, told me at the City Hall rally that when Asian Pacific Islander groups went to buy ads in Chinese and Korean newspapers, they were informed that Yes on 8 had been renting space for weeks.

Many gay leaders, especially those less central to the No on 8 efforts, told me that such disorder was endemic to gay efforts. "The campaign doesn't seem to have got its act together until a few weeks ago. It wasn't clicking. It wasn't raising money. It didn't have good ads on the air," says Rafael Mandelman of the San Francisco Harvey Milk LGBT Democratic Club. He laments, in particular, the absence of gay couples in No on 8 materials, which mainly depicted straight celebrities and elected officials. That's a choice that was strangely mirrored by the Yes on 8 campaign, which put not antigay hate but heterosexual love--its sanctity and the threat to it--at the center of its message. At the City Hall rally on Sunday, the loudest cheers were for a young, straight Chinese couple who had exchanged their vows in front of the crowd. Their marriage, they hoped, would be made "safe" by Prop 8. It certainly was celebrated.
By Richard Kim
Reprinted with permission from The Nation