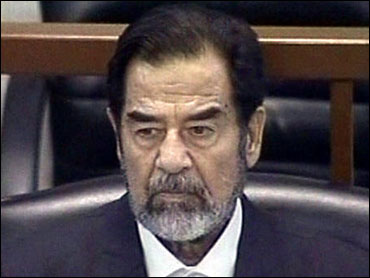 A defense lawyer in Saddam Hussein's genocide trial demanded Wednesday that the court investigate the alleged ransacking of the defense team's office in the U.S.-controlled Green Zone.

The demand was made by counsel Badee Izzat Aref as the trial resumed with Saddam and the six co-defendants present. They have been on trial since August for their roles in a crackdown against Kurdish guerrillas in the late 1980s.

About 180,000 people, mostly civilians, died in the crackdown, codenamed Operation Anfal, the prosecution has said.

Aref told the court that intruders last month damaged and stole dozens of documents, undermining the defense's effort in the trial. Chief judge Mohammed Oreibi al-Khalifa ordered the prosecution to give a new set of documents to the defense.

"I demand the opening of an investigation on the American side because the area of the offices is guarded by the Americans, who would shoot anybody who comes near," Aref said.

It was the first time that Aref appeared in the court since Sept. 21 when the defense team announced a boycott of the trial to protest the court's rejection of many of their motions.

On Sunday, a separate court sentenced Saddam to hang for the deaths of about 150 Shiite Muslims following an assassination attempt against him in 1982 in the town of Dujail.

Saddam has appealed, but his trial for Operation Anfal is to continue while a panel of nine judges considers the appeal. Saddam and his co-defendants could also be condemned to death if they are convicted in this trial.

In Tuesday's session, Saddam called on all Iraqis — Arabs and Kurds — "to forgive, reconcile and shake hands."

On Wednesday, the court heard more testimony from Kurdish survivors about attacks against them during the Anfal operation.

"After this we had difficulty in breathing and I told the villagers that the village was hit by chemical weapons," he said. "I could see birds falling and liquids coming out of people's noses."

Another witness, Tawfeeq Abdul-Aziz Mustafa, said he and other villagers fled to Turkey after a chemical attack on their community Aug. 25, 1988.

"We looked at the villages and there was yellow smoke coming out," he said. "Our eyes became red, itchy and teary. We knew it was a chemical attack."

Mustafa said he lost about 40 percent of his vision because of exposure to the chemical weapons.

One of the defendants, former intelligence chief Sabir al-Douri, maintained that the Iranian army was operating near where some of the attacks took place.

He said that Kurdish rebels, whom the defense maintains were the target of the Anfal operation, were working closely with Iranian troops during the eight-year war, which began in 1980.

The trial adjourned to Nov. 27 to give the defense time to submit its list of witnesses.