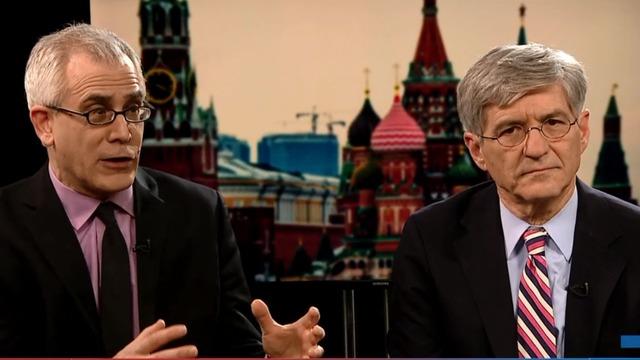 During the 2016 election, President Obama and his administration held meeting in the situation room where they discussed how to deal with the Russian cyberattacks, including weighing a full-on cyberwar, authors David Corn and Michael Isikoff reveal in their new book " "Russian Roulette: The Inside Story of Putin's War on America and the Election of Donald Trump." They talked to Elaine Quijano on CBSN's "Red & Blue" in an interview that aired Thursday.

"There were some on the White House staff, particularly who were in charge of cybersecurity and also Russia affairs, who believed that the Russian attack was so serious and so unprecedented that unless the U.S. struck back hard and struck back fast, it would send a signal to the Russians that they could get away with this," Isikoff said. "They came up with a lot of creative proposals for doing that – cyberattacks by the U.S. against Russian news sites, Russian online sites that were dumping political emails that had been hacked by the Russians, exposing the corruption in [Russian President Vladimir] Putin's own government, secret bank accounts that were being held for the benefit of Putin's daughters in Latvia -- all of these would have been pretty aggressive proposals."

Isikoff said they discovered in their reporting that Mr. Obama "didn't want to go there" with the aggressive proposals.

"There was a concern that this would escalate a conflict with Russia, there would be a cyberwar in which the U.S. could end up the losers because we had much to lose," Isikoff said. "As a consequence, the White House, at that point in time, doesn't take any action. The decision is the president will warn Putin to knock it off and if he doesn't, there will be consequences down the road. The message was delivered, whether it was ever heard by Putin and whether Putin took it seriously remains seriously in question at this point."

Corn called the chapter -- Chapter 14 -- in their book about the Obama administration's response the "what would you do chapter." Corn said the National Security Council made arguments for a strong response, while Mr. Obama's other top advisers -- including Secretary of State John Kerry, intelligence chiefs and Defense Secretary Ash Carter -- weighed what to do.

Isikoff said "it's frightening" to realize the U.S. was so "vulnerable."

Corn and Isikoff said Putin had developed a "grudge" against Secretary of State Hillary Clinton and the entire Obama administration. In 2011, Clinton said the Russian elections were "marred by fraud" and on the verge of being illegitimate.

"Putin took that personally to the extent that he held a grudge against Hillary Clinton – it goes back to that moment when he believed that Hillary Clinton, as Obama's Secretary of State, was undermining his legitimacy as president of Russia," Isikoff said.

Corn and Isikoff also reveal in their book that former Trump campaign adviser George Papadopoulos told special counsel Robert Mueller's investigators about a March 31, 2016 campaign meeting. In that meeting, Papadopoulos pitched that he had contacts in Britain who have ties to the Kremlin and they want to set up a meeting between Donald Trump and Putin, according to the plea agreement.

Corn and Isikoff said previous accounts of this meeting indicate this idea was shot down -- but they found in their reporting that Papadopoulos told Mueller's investigators that Mr. Trump "gave him the green light." They said Mr. Trump allegedly looked at Jeff Sessions -- now the Attorney General -- and nodded.

Papadopoulos pleaded guilty in the fall and has agreed to be a cooperating witness for Mueller.  Papadopoulos did have further meetings with the Kremlin and finds out the Kremlin has thousands of Clinton's emails, Isikoff said. "The fact that the top guy himself -- Donald Trump -- might have given a green light is pretty significant information."

"One reason these contacts are important, whether or not there was a Trump-Putin summit – we can only imagine what that would have been like – is that Papadopoulos spent five months in contact with Russians or Russian cutouts," Corn said. "And at the end, when it seemed like the Trump-Putin summit was probably not likely to happen, his aim, according to documents filed by special counsel Mueller, was to set up an off-the-record backchannel between the Trump campaign and Putin's own office ... People talk about collusion, this is a collusion I think of different sorts. Not working together on a detailed plan, but at least sending this signal: We have no problem with what you're doing here."

As for this week's very public ouster of Mr. Trump's Secretary of State, Rex Tillerson, Isikoff said Putin must be thinking "how can I do any better?"

This is an "administration in which nobody lasts for any length of time, nobody knows how long they're going to last, nobody knows what the policy is going to be, you've achieved your goals that you set out during the 2016 influence campaign," Isikoff said.

"It's an administration with nobody in it ... We also see the other side of this – there's chaos in the Trump administration, that any ability to prevent Russia from again meddling in the U.S. democracy is limited," Corn said.

Watch more of Dave Cullen's interview with CBSN in the video player at the very top of this page.