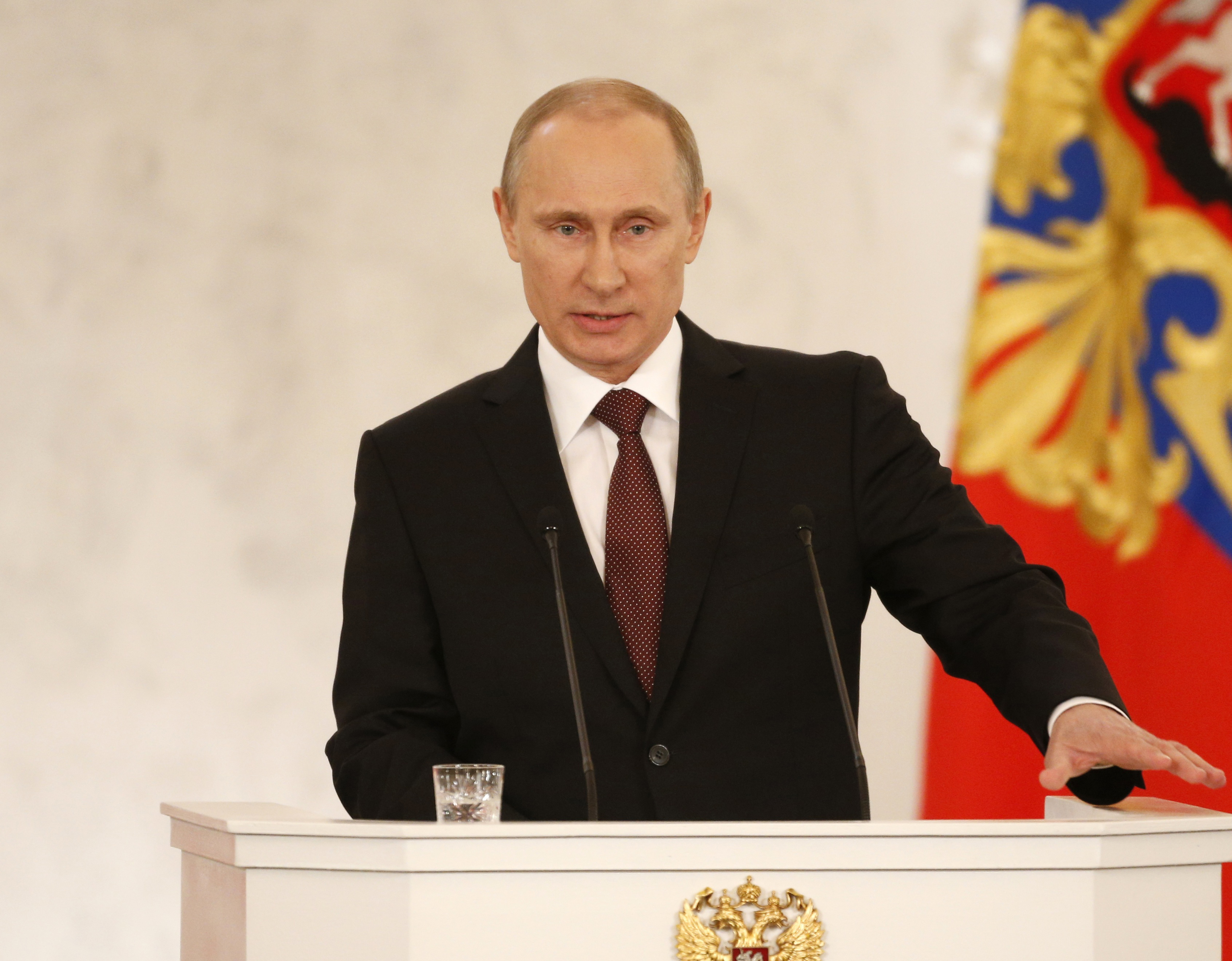 MOSCOW -- With a sweep of his pen, President Vladimir Putin added Crimea to the map of Russia on Tuesday, describing the move as correcting past injustice and responding to what he called Western encroachment upon Russia's vital interests.

In an emotional 40-minute speech televised live from the Kremlin, Putin said "in people's hearts and minds, Crimea has always been an integral part of Russia."

He dismissed Western criticism of Sunday's Crimean referendum - in which residents of the strategic Black Sea peninsula overwhelmingly backed breaking off from Ukraine and joining Russia - as a manifestation of the West's double standards.

But the Russian leader insisted his nation has no intention to invade other regions of Ukraine, saying "we don't want a division of Ukraine, we don't need that."

Putin referred to Ukraine as a state born out of an illegal secession from the Soviet Union. He also argued that today's Ukraine includes "regions of Russia's historic south" and was created on a whim by the Bolsheviks.

The statement sounded as a clear warning to both the new Ukrainian government in Kiev and to the West to respect Russia's interests.

While Putin boasted that the Russian takeover of Crimea was conducted without a single shot, a Ukrainian military spokesman said that one Ukrainian serviceman was killed and another injured when a military facility in Crimea was stormed Tuesday by armed men just hours after Putin's speech.

In response, Ukraine's new government called Putin a threat to the whole world and U.S. Vice President Joe Biden warned that the U.S. and Europe will impose further sanctions against Moscow.

"The world has seen through Russia's actions and has rejected the flawed logic," Biden said, meeting Tuesday with anxious European leaders in Poland.

"Today's statement by Putin showed in high relief what a real threat Russia is for the civilized world and international security," Ukrainian Foreign Ministry spokesman Evhen Perebinis said on Twitter. "(The annexation) has nothing to do with law or with democracy or sensible thinking."

Thousands of Russian troops have been massed along Ukraine's eastern border for the last few weeks - Russia says that was for military training while the U.S. and Europe view the troops as an intimidation tactic.

British Foreign Secretary William Hague said the U.K. is suspending military cooperation with Russia in light of the crisis over Ukraine. Speaking shortly after Putin signed the treaty to annex Crimea, Hague told British lawmakers that it is regrettable that Putin is choosing a path of isolation in the annexation of Crimea and denying Russian and Crimean citizens of a partnership with the international community.

Putin argued that the months of protests in the Ukrainian capital of Kiev which prompted President Viktor Yanukovych to flee to Russia had been instigated by the West in order to weaken Russia. He cast the new Ukrainian government as illegitimate, driven by radical "nationalists, neo-Nazis, Russophobes and anti-Semites."

With strong emotion, Putin accused the West of cheating Russia and ignoring its interests in the years that followed the 1991 Soviet collapse.

"They have constantly tried to drive us into a corner for our independent stance, for defending it, for calling things their proper names and not being hypocritical," Putin said. "But there are limits. And in the case of Ukraine, our Western partners have crossed a line. They behaved rudely, irresponsibly and unprofessionally."

Following the speech before lawmakers and top officials, Putin and Crimean officials signed a treaty for the region to join Russia.

The treaty will have to be endorsed by Russia's Constitutional Court and ratified by both houses of parliament, but Valentina Matviyenko, the speaker of upper house of Russian parliament, said the procedure could be completed by the end of the week.

Crimea had been part of Russia since the 18th century until Soviet leader Nikita Khrushchev transferred it to Ukraine in 1954. Both Russians and Crimea's majority ethnic Russian population see annexation as correcting a historic insult.

In his speech at the Kremlin's white-and-gold St. George hall, which was often interrupted by applause, Putin said the rights of ethnic Russians in Ukraine had been abused by the new Ukrainian government. He insisted that Crimea's vote Sunday to join Russia was in line with international law and reflected its right for self-determination.

To back that claim, Putin pointed to Kosovo's independence bid from Serbia - supported by the West and opposed by Russia - and said Crimea's secession from Ukraine repeats Ukraine's own secession from the Soviet Union in 1991.

He denied Western accusations that Russia invaded Crimea prior to the referendum, saying Russian troops were sent there in line with a treaty with Ukraine that allows Russia to have up to 25,000 troops at its Black Sea Fleet base in Crimea.

The hastily called Crimean vote was held just two weeks after Russian troops had overtaken the Black Sea peninsula, blockading Ukrainian soldiers at their bases. The West and Ukraine described the referendum as illegitimate and being held at gunpoint, but residents on the peninsula voted overwhelmingly to join Russia.

Putin had previously warned that he would be ready to use "all means" to protect Russian speakers in eastern Ukraine, and Russia has built up its forces alongside the border between the two countries, raising fears of an invasion.

Ukraine's Prime Minister Arseniy Yatsenyuk said in a televised statement that Ukrainian law-enforcement agencies have gathered "convincing evidence of the participation of Russian special services in organizing unrest in the east of our country."

The United States and the European Union on Monday announced asset freezes and other sanctions against Russian and Ukrainian officials involved in the Crimean crisis. President Barack Obama warned that more would come if Russia didn't stop interfering in Ukraine.

CBS News' Bill Plante reports that White House officials says the president wants to leave the door open for a negotiated solution but other than threatening more sanctions, there's not much else the White House seems willing to do. Any kind of U.S. military intervention seems completely off the table.

Earlier in the day, France's Foreign Minister Laurent Fabius said on Europe-1 radio leaders of the Group of Eight world powers "decided to suspend Russia's participation." The other seven members of the group had already suspended preparations for a G-8 summit that Russia is scheduled to host in June in Sochi.

In his speech, Putin made it clear that Russia wouldn't be deterred by Western sanctions, and asked China and India for their support.

The Russian State Duma, the lower chamber of parliament, on Tuesday unanimously passed a resolution condemning U.S. sanctions targeting Russian officials including members of the chamber. The chamber challenged Obama to extend the sanctions to all the 353 deputies who voted for Tuesday's resolution, suggesting that being targeted was a badge of honor. Eighty-eight deputies left the house before the vote.

Putin found support even in unusual places. Former Soviet President Mikhail Gorbachev hailed Crimea's vote to join Russia as a "happy event." In remarks Tuesday by online newspaper Slon.ru, he said Crimea's vote offered residents the freedom of choice and could be an example for people in Ukraine's Russian-speaking eastern region, who he said should also decide their fate.

Many in Crimea's ethnic Tatar minority were wary of the referendum, fearing that Crimea's break-off from Ukraine would set off violence against them.

Crimean Deputy Prime Minister Rustam Temirgaliyev seemed to confirm those fears, saying in remarks carried by the RIA Novosti news agency that the government would ask Tatars to "vacate" some of the lands they "illegally" occupy so authorities can use them for "social needs."

But Putin on Tuesday vowed to protect the rights of Crimean Tatars and keep their language as one of Crimea's official tongues, along with Russian and Ukrainian.