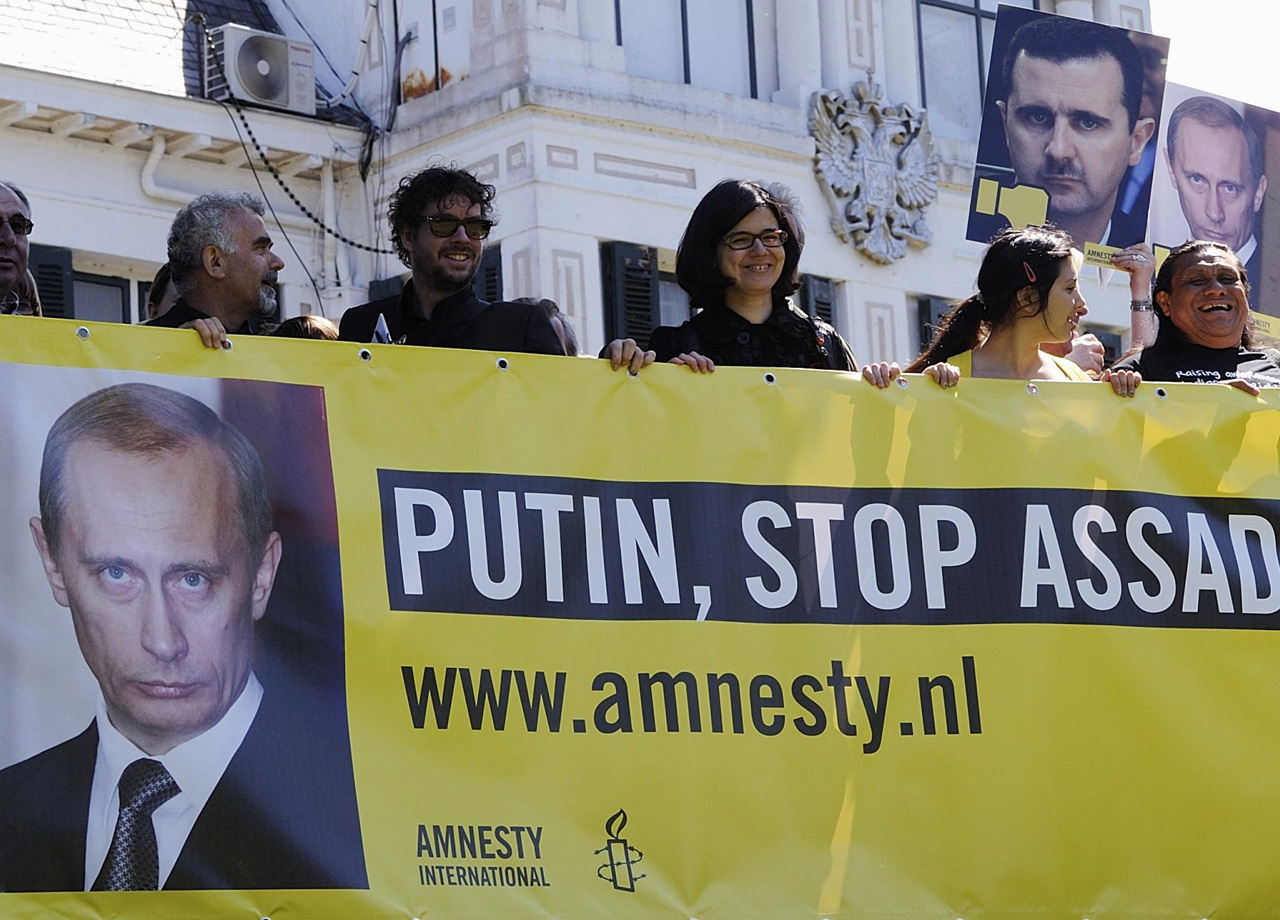 Lavrov told a news conference following talks with his Iraqi counterpart that Russia believes it's up to the Syrians to determine their country's future and that foreign players shouldn't meddle in that.

"It's not true that we are discussing Syria's fate after Bashar Assad," Lavrov said. "We aren't dealing with a regime change either through approving unilateral actions at the United Nations Security Council nor through taking part in some political conspiracies."

He argued that an international conference on Syria that Russia has proposed should focus on persuading the Syrian parties to sit down for talks. He says that Russia is opposing any attempts to use the conference to predetermine Syria's future.

"This meeting should be aimed at mobilizing resources that foreign players have to create conditions needed to start an all-Syrian political process, not to predetermine its direction."

He warned against using the conference to "justify any future unilateral actions."

Russia, along with China, has twice shielded Syria (its last remaining ally in the Arab world) from international sanctions over Assad's violent crackdown on protests that have left 13,000 people dead according to opposition groups.

The head of the U.N. observers in Syria said Friday a spike in violence is derailing the monitoring mission, which is the only functioning part of an international peace plan to calm the country's spiraling crisis.

Maj. Gen. Robert Mood blamed both sides of the conflict for the escalating bloodshed.

"Violence over the past 10 days has been intensifying willingly by the both parties, with losses on both sides and significant risks to our observers," Mood told reporters in Damascus.

He said the mission was established as the "factual voice" on the ground "but the escalating violence is now limiting our ability to observe, verify, report as well as assist in local dialogue and stability projects."

Mood's comments were the clearest sign yet that a peace plan brokered by international envoy Kofi Annan two months ago is disintegrating. The regime and the opposition both have ignored a truce that was supposed to go into effect April 12.

Mood said there appears to be a lack of willingness to seek a peaceful transition. "Instead there is a push towards advancing military positions," he said.

On Friday, the Syrian regime kept up a ferocious offensive on rebel areas around the country in one of the most serious escalations in violence since Annan brokered the truce.

An activist in the northern city of Aleppo said troops backed by helicopters and tanks were engaged in "raging battles" in the rebel-held town of Anadan and several other locations in the province.

Syrian troops have been sweeping through villages and towns in Syria's northern, central, southern and seaside provinces this week.

The military on Wednesday overran the town of Haffa in the coastal Latakia province, pushing out hundreds of rebels after intense battles that lasted eight days. U.N. observers entered the nearly deserted town Thursday and found smoldering buildings, looted shops, smashed cars and a strong stench of death, according to U.N. spokeswoman Sausan Ghosheh.

The siege of Haffa, a Sunni-populated village, had become a focus of international concern because of fears the uprising against President Bashar Assad is evolving into a sectarian civil war pitting his minority Alawite sect against the majority Sunnis and other groups. Recent mass killings in other Sunni-populated areas have fed those concerns.

The fighting, now mostly quelled in Haffa, was mirrored in other parts of Syria, where more than 40 civilians and opposition fighters were killed Thursday, according to activists, alongside more than a half-dozen Syrian forces.

The fighting included clashes in the town of Hamuriya, near Damascus, that killed at least nine men who were allegedly butchered with knives. A video circulated by activists showed a pile of lifeless men, including one who was clearly slashed through the neck.

Rami Abdul-Rahman, director of the Observatory, urged observers on Friday to "immediately investigate" the men's slaughter.

U.N. observers have reported a steep rise in violence and a dangerous shift in tactics by both sides in Syria in recent weeks. Car bombings and suicide bombings have become increasingly common as the 15-month uprising against Assad becomes militarized.

Most have targeted security buildings and police buses, symbols of Assad's regime.

Activists say some 14,000 people have been killed since the uprising against Assad began in March 2011.

State-run news agency SANA reported Friday that authorities had arrested an al Qaeda terrorist who planned to blow himself up in a Damascus mosque during Friday prayers. It identified the man as Mohammad Hussam al-Sudaqi.

"Sexual violence in detention is one of many horrific weapons in the Syrian government's torture arsenal and Syrian security forces regularly use it to humiliate and degrade detainees with complete impunity," said Sarah Leah Whitson, Middle East director at Human Rights Watch.

HRW said it does not have evidence that high-ranking officers commanded their troops to commit sexual violence but said it had information indicating that no action has been taken to investigate or punish government forces who did. It said detention facilities where male and female detainees have reported sexual torture include several departments of the intelligence agencies.