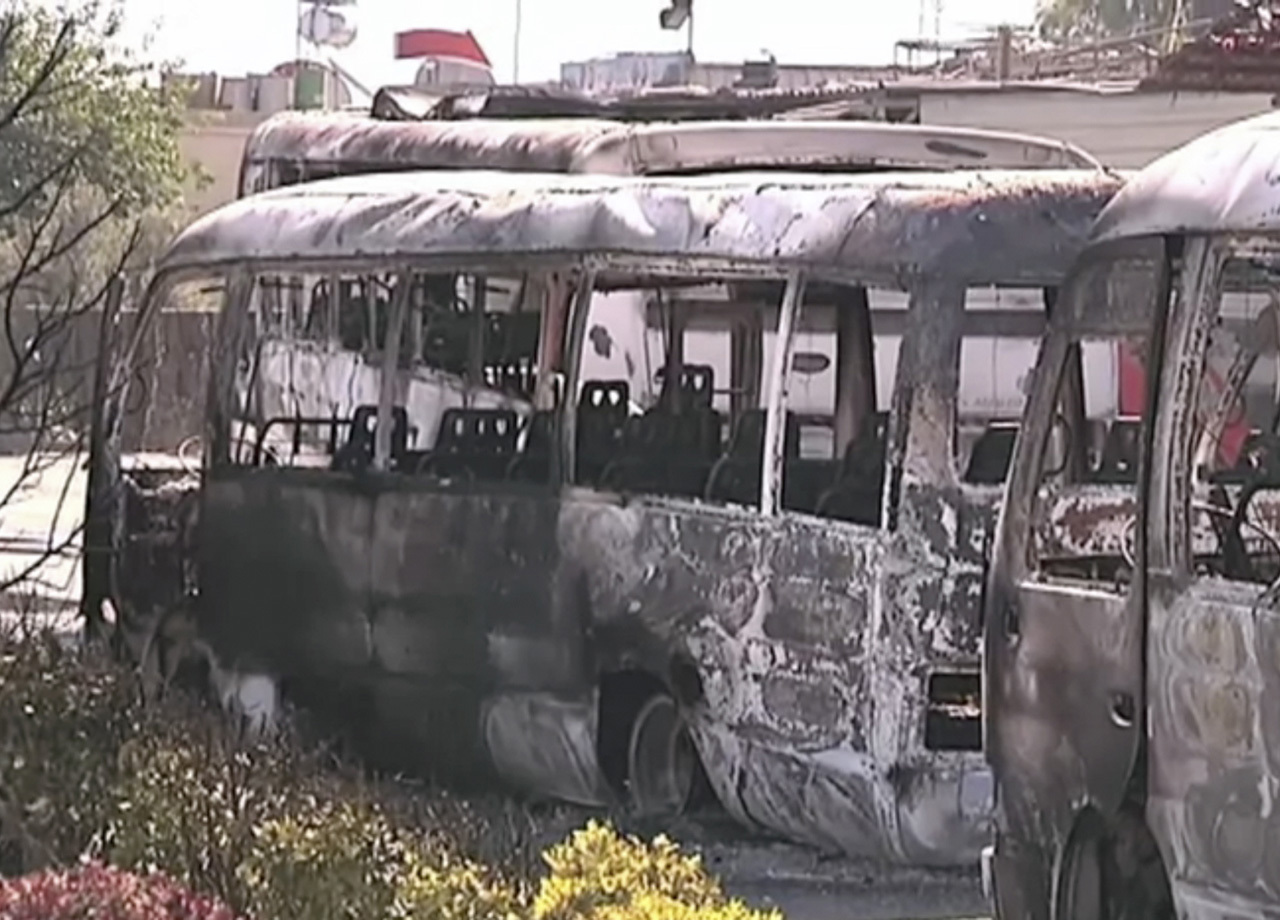 (AP) BEIRUT - Bullets and shrapnel shells smashed into homes in the Syrian capital overnight, as troops battled rebels in the streets, in the heaviest fighting yet in Damascus. The violence marked an increased boldness among rebels in taking their fight against the regime of President Bashar Assad to the center of his power.

For nearly 12 hours of fighting that lasted into the early hours Saturday, rebels armed mainly with assault rifles fought Syrian forces. U.N. observers said rebels fired a rocket-propelled grenade at the local power plant, damaging parts of it and charring six buses, according to video the observers took of the scene.

Syrian forces showed the regime's willingness to unleash elevated force in the capital: at least three tank shells slammed into residential areas in the central Damascus neighborhood of Qaboun, an activist said. Intense exchanges of assault-rifle fire marked the clash, according to residents and amateur videos.

At least 42 civilians were killed in violence around the country outside Damascus on Saturday, according to the Syrian Observatory for Human Rights, a Britain-based activist group. Among them were 20, including nine women and children, who died in heavy, pre-dawn shelling in the southern city of Daraa, where the uprising against Assad began in March 2011. The group's figures could not be independently confirmed.

In a Daraa mosque, a father stood over his son killed in the shelling, swaddled in a blanket.

"I will become a suicide bomber!" the father shouted in grief, according to an amateur video of the scene.

Video: What options does the U.S. have with Syria?
Shelling resumes in Houla, but no sign of "terrorists" Assad blames
Assad: "Monsters" to blame for Syria massacre
U.N.: Syria monitors shot at en route to death site

Later Saturday, tens of thousands of Daraa residents buried the slain from the shelling. They sang, danced and paraded the dead in coffins around a large square, giving the mass funeral the appearance of a mass wedding party, according to footage of the scene.

The Damascus violence was a dramatic shift, since the capital has been relatively quiet compared with other Syrian cities throughout the uprising. Damascus, Assad's stronghold, and the northern city of Aleppo, the country's largest, are under the firm grip of security forces.

To watch Elizabeth Palmer's report from Syria, and then analysis of Syrian's military capabilities by CBS NEws senior military security analyst Gen. Richard Myers, click on the video player above.

The rebels' brazenness in appearing in the Damascus districts underscored deep-seated Sunni anger against the regime, with the neighborhoods' residents risking their safety — and potentially their lives — to shelter the fighters. Residents burned tires to block the advance of Syrian troops, sending plumes of smoke into the air, according to amateur video of one scene.

Urban Sunni Syrians had once mostly stayed at arms' length from their mostly rural compatriots leading the 15-month uprising, fearing the instability that their leaderless, chaotic movement would bring.

But it appears a series of massacres of mainly Sunni peasants over the past few weeks have tipped some of their urban brethren in favor of the uprising. One rebel supporter in Qaboun said the recent mass killings made people see rebel fighters more as protectors against Assad's forces.

"The regime has forced the rebels into the city. When they commit attacks, or massacres, or arrests, they come in to defend residents," he said.

The most recent mass killing was on Wednesday in central Syria, where activists say up to 78 people were hacked, burned and stabbed in the farming village of Mazraat al-Qubair. The opposition and regime have traded blame over the slayings.

"The heart of this revolt is the poor, jobless youth in the countryside. But that is gathering strength in other places, in Aleppo, in Damascus and even the Kurdish regions," said Syria expert Joshua Landis.

"The psychological state of the people, after watching these massacres, is so far advanced. People are ready to do whatever it takes. They are frightened; it could come next to them."

The fighting was sparked in two neighborhoods, Qaboun and Barzeh, during the day Friday, when troops opened fire on anti-Assad opposition gatherings and rebels responded, witnesses said. Blasts shook the districts until about 1:30 a.m. on Saturday. In the fringe neighborhood of Kfar Souseh, fighting began after rebels attacked a Syrian forces checkpoint.

"We spent a night of fear," one resident said, speaking on condition of anonymity for fear of reprisals. The resident said the shooting and explosions in the capital "were the worst so far."

At least five people were killed in Qaboun, according to an activists' video that showed the bodies.

Also Saturday, troops shelled parts of the central city of Homs, one of the main battlegrounds of the uprising, and stormed into the city's posh neighborhood of Ghouta, conducting raids.

The latest escalations are another blow to international envoy Kofi Annan's peace plan, which aims to end the country's bloodletting. Annan brokered a cease-fire that went into effect on April 12 but has since been violated nearly every day since and never properly took hold.

Thousands have been killed since the crisis began in March last year. The U.N.'s latest estimate is 9,000 dead, but that is from April and it has been unable to update it. Syrian activists put the toll at more than 13,000.

Also Saturday, the foreign minister of Assad's ally Russia said Moscow would continue to oppose the outside use of force, despite its growing concerns about the Syria conflict. Sergey Lavrov called for an international conference to galvanize commitment behind Annan's plan.

Efforts by Western and Arab nations to help the opposition have been hampered by fragmentation amid the movement. The main opposition movement, the Syrian National Council, has been plagued by infighting.

The council was gathering Saturday in Turkey to elect a new leader nearly three weeks after its Paris-based president Burhan Ghalioun offered to step down over mounting criticism of his leadership. The frontrunner to replace him was Abdulbaset Sieda, a member of Syria's minority Kurd community, SNC spokeswoman Basma Kodmani told Associated Press Television.

His elevation to the post could be part of an attempt to appeal to Syria's significant Kurdish minority, which has largely stayed on the sidelines of the uprising. The community is deeply suspicious that Sunni Arabs who dominate the opposition will be no more likely to provide them greater rights than Assad's regime has.

A vote on the new leader had been expected late Saturday, but it was postponed to Sunday with no immediate explanation.

Also Saturday, U.N. observers in Syria ostensibly to monitor the cease-fire issued the first independent video images from the scene of the reported massacre in Mazraat al-Qubair.

The video, taken in the U.N. visit a day earlier, showed blood splashed on a wall pockmarked with bullet holes and soaking a nearby mattress. A shell punched through one wall of a house. Another home was burnt on the inside with dried blood was splashed on floors.

One man wearing a red-and-white checked scarf to cover his face, pointed at a 2008 calendar adorning a wall, bearing the photo of a lightly-bearded, handsome man.

"This is the martyr," the resident, sobbing. He sat on the floor, amid strewn colorful blankets, heaving with tears.

It was not immediately clear if he was a resident of the village or related to the man in the photograph.

"They killed children," said another unidentified resident. "My brother, his wife and their seven children, the oldest was in the sixth grade. They burnt down his house."

After the observers' visit, U.N. spokeswoman Sausan Ghosheh said the scene held evidence of a "horrific crime" and that the team could smell the stench of burned corpses and saw body parts strewn around the now deserted village, once home to about 160 people.

She said residents' accounts of the mass killing were "conflicting," and that the team was still cross checking the names of the missing and dead with those supplied by nearby villagers.

Opposition activists and Syrian government officials blamed each other for the killings. Activists accused pro-government militiamen known as "shabiha." A government statement on the state-run news agency SANA said "an armed terrorist group" killed nine women and children before Hama authorities were called and killed the attackers.