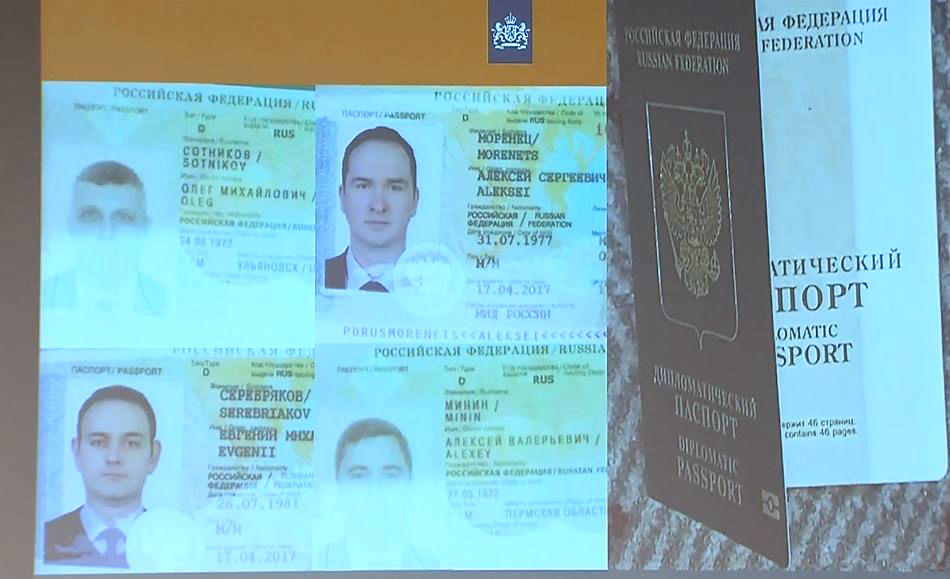 The Dutch government said Thursday that it blocked a cyberattack by Russian intelligence agents in April targeting the global chemical weapons watchdog agency. The head of the Netherland's military intelligence agency identified four Russians behind the alleged operation, which targeted the Organization for the Prohibition of Chemical Weapons (OPCW) headquarters in The Hague.

Dutch officials showed images of a rental vehicle they said was discovered at the time with computer equipment and transformers used in the alleged plot. He said the Russians were expelled from the Netherlands immediately after the plot was foiled on April 13.

Later Thursday, the U.S. Department of Justice announced charges against seven Russian agents for cyber crimes linked to the Dutch investigation. The indictment accused the seven members of Russia's military intelligence agency, the GRU, of hacking into the world anti-doping agency, the OPCW, and of cyberattacks aimed at a U.S. nuclear energy facility.

"The conspiracy conducted persistent and sophisticated computer intrusions affecting U.S. persons, corporate entities, international organizations, and their respective employees located around the world, based on their strategic interest to the Russian government," the Department of Justice said in a statement.

The revelation of the plot in the Netherlands came just hours after Britain's Defense Minister Gavin Williamson, at a NATO summit with U.S. Secretary of Defense Jim Mattis and other allies, called Russia's cyberattacks of recent years the "actions of a pariah state," and vowed that NATO would "be exposing" Moscow's nefarious acts.

NATO chief Jens Stoltenberg warned Russia, not long after the announcement by the Netherlands, to halt its "reckless" behavior. "Russia must stop its reckless pattern of behaviour, including the use of force against its neighbours, attempted interference in election processes, and widespread disinformation campaigns," he said in Brussels.

"Basically the Russians got caught with their equipment, people who were doing it, and they have got to pay the piper, they are going to have be held to account," Mattis said later Thursday at the NATO summit. "How we respond to something like this is a political decision by the nations involved, and we will be standing by them. But it does not necessarily equate to some kind of tit for tat on cyber. We have a wide variety among our nations of responses available to us."

Mattis lambasted Russia for the alleged attack on the OPCW, calling it, "the latest of a world-wide pattern of reckless and irresponsible behavior from Moscow."

In Moscow, the Russian Foreign Ministry issued what has now become a familiar denial of all allegations. Ministry spokeswoman Maria Zakharova called the latest charges against Russia "big fantasies." And at United Nations headquarters in New York, Russia's deputy ambassador Dmitry Polyanskiy ridiculed Britain over the allegations, calling them "Russiaphobic."  His tweet did not address the specific allegations against Russia's military intelligence agency.

British Ambassador to the Netherlands Peter Wilson said the plot against the OPCW showed "complete disregard" by Russia for the agency's mission to investigate illegal chemical weapons attacks around the world. He noted that the plot was disrupted in April as the OPCW worked to confirm Britain's allegations that GRU agents attempted to murder Russian ex-double agent Sergei Skripal in England, and to confirm an alleged chemical attack by Syria's Russian-backed military in Douma, Syria.

"The disruption of this attempted attack on the OPCW was down to the expertise and the professionalism of the Dutch security services in partnership with the United Kingdom," Wilson said. "The OPCW is a respected international organization which is working to rid the world of chemical weapons. Hostile action against it demonstrates complete disregard for this vital mission."

"We have been aware of the interest of Russian intelligence services in this investigation and have taken appropriate measures." she said. "We remain very alert about this."

Bijleveld-Schouten said the Russian Ambassador to the Netherlands was summoned on Thursday to the Dutch Ministry of Foreign Affairs to be reprimanded for Moscow's "unacceptable" behavior.

Ambassador Wilson said the plot in The Hague was not an isolated incident, accusing the same Russian military intelligence unit behind the thwarted plot of sending operatives around the world to carryout other, "brazen, close-access cyber operations."

Britain and the Netherlands would be "stepping up our combined activity against" the GRU, Wilson said. "We will shine a light on their activities. We will expose their methods, and we will share this with our allies."

He said increased sanctions against Russia would be sought in retaliation for Moscow's "malign activity."

British Prime Minister Theresa May and her Dutch counterpart Mark Rutte released a joint statement vowing to "defend international institutions from those that seek do to them harm," and condemning the Russian military for its "disregard for the global values and rules that keep us all safe."

In London, British Foreign Secretary Jeremy Hunt called the Russian military's plot against the OPCW "part of a sustained pattern of hostile cyberspace activity," and vowed that Moscow would face "consequences."