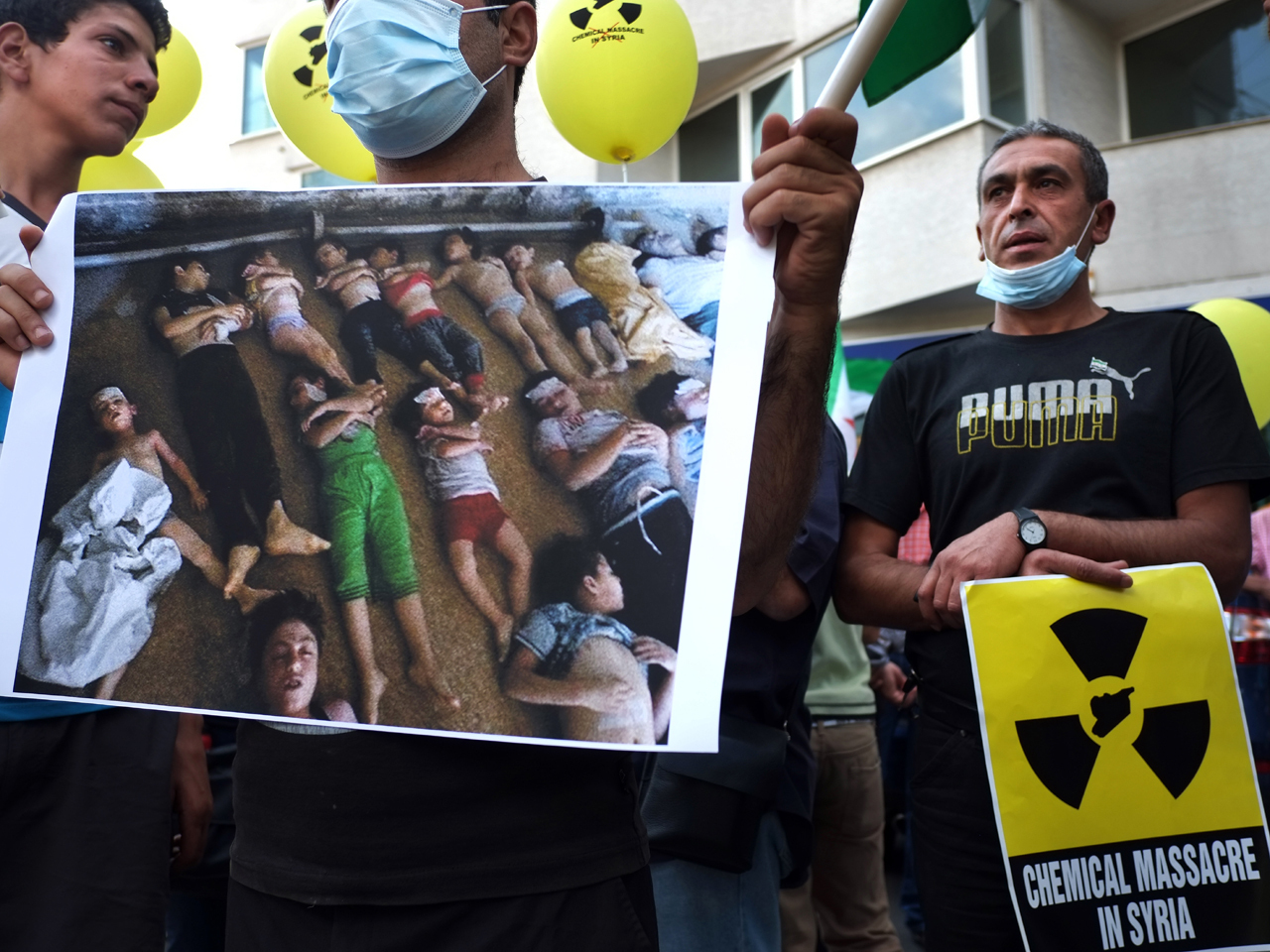 (CBS News) The Russian Foreign Ministry today drew a parallel between reports that Syrian government forces has used chemical weapons and claims by the administration of President George W. Bush that Saddam Hussein was in possession of weapons of mass destruction - claims which lead to a U.S.-led invasion of Iraq a decade ago.

In a statement reported by Reuters, Moscow warned against assigning blame without a full investigation by U.N. inspectors of Wednesday's alleged toxic gas attack on the eastern suburbs of the Syrian capital. Moscow's warning came after a U.S. officials said the Obama administration has "very little doubt" the Assad regime in Syria is guilty of deadly chemical weapon use.

"We once again decisively urge (the United States) not to repeat the mistakes of the past and not to allow actions that go against international law," the foreign ministry said.

"Any unilateral military action bypassing the United Nations," the statement continued, would lead to further escalation, "and will affect the already explosive situation in the Middle East in the most devastating way."

Anti-government activists and Doctors Without Borders say that more than 300 people were killed in the attack on August 21.

CBS News national security correspondent David Martin reported Friday that the Pentagon is making initial preparations for a cruise-missile attack on Syrian government forces, but to date the United States has had measured involvement in the conflict which has claimed an estimated 100,000 Syrian lives.

In a CNN interview last week President Obama indicated the United States would not respond militarily to any use of chemical weapons by the Assad government without a mandate and support from the international community.

"Without clear evidence that can be presented, then there are questions in terms of whether international law supports it -- do we have the coalition to make it work?" Mr. Obama said in the interview. "Those are considerations that we have to take into account."

Statements by political figures Sunday diverged on the matter of whether U.S. military operation in the Syrian civil war would require United Nations approval or oversight.

On "Face the Nation," former Secretary of State. Gen. Colin Powell said of U.S. involvement in the Syrian conflict that "America has to take a much more clever role. We shouldn't go around thinking that we can really make things happen. We can influence things and we can be ready to help people when problems have been resolved, or one side has prevailed over the other. That's when I think we can play a role.

"But to think that we can change things immediately, just because we're America, that's not necessarily the case. These are internal struggles, and the parties inside those countries are going to have to sort it out amongst themselves."

Also on "Face the Nation," Sen. Jack Reed, D-R.I., said the objective of any U.S. military intervention should be limited prohibiting the use of chemical weapons of WMDs.

"I think we can't let ourselves get into a situation where this becomes a springboard for a general military operations in Syria to try to change the dynamic," Reed said. "That dynamic is going to be long term, very difficult, and ultimately established and settled by the Syrians, not by foreign powers."

He said the threat of such weapons to the Middle East situation required that any such military actions be an international operation.

"It can't be a unilateral American approach," he said. "It has to have support internationally, not just politically but militarily. And we have to make it very clear what our objective is -- which is to say we will not tolerate the use of these weapons of mass destruction, not only by the Syrians, but by anyone else. And I think if we do that, we have a possibility of avoiding more complicated consequences."

He also expressed hope that a peace conference in Geneva, involving the United States and Russia, could produce a cease-fire and, ultimately, a "choice of the Syrian people" about their future.

Republican Rep. Michael McCaul of Texas, Chairman of the House Homeland Security Committee, told Schieffer on Sunday that his greatest fear was of chemical weapons getting into the wrong hands, to pose a threat towards Western interests abroad or the U.S. homeland.

McCaul said he would support a missile attack against stockpiles of chemical weapons, if the Pentagon advised.

"I think that's an option the president should be looking at," he said.

McCaul also criticized the Obama administration for allowing the conflict to "fester" by taking a "wait-and-see policy and hoping for the best. We had a time to support moderate forces in toppling the Assad regime, and we failed to do that. Every time I get briefed on this issue, it gets worse because it's become a Mecca for the jihadists."

On "Fox News Sunday," reaction to reports of the suspected chemical weapons attack led Sen. Bob Corker, R-Tenn., to call for an immediate military response by the U.S., in a "surgical and proportional way, something that gets their attention." The senator rejected, however, the idea of U.S. troops on the ground.

Rep. Eliot Engel, D-N.Y., said that while the U.S. must respond "quickly," it must do so together with NATO allies, possibly repeating the tactics of cruise missile strikes as were used in Libya against the forces of Muammar Qaddafi.

On ABC's "This Week," former Egyptian foreign minister Amr Moussa said that if chemical weapons have been used in the Middle East, then the United Nations Security Council must consider the matter.

"This is a very dangerous thing," he said. "But things have to be verified in order to take a decision just like that, an air strike or invasion or whatever it is."

Of the suggestion that the U.S. might engage in a limited missile strike against chemical weapon stockpiles, Moussa said: "Well, it always starts like that -- limited strike -- and then it widens, and grows and grows and grows, and then the whole region would be involved."