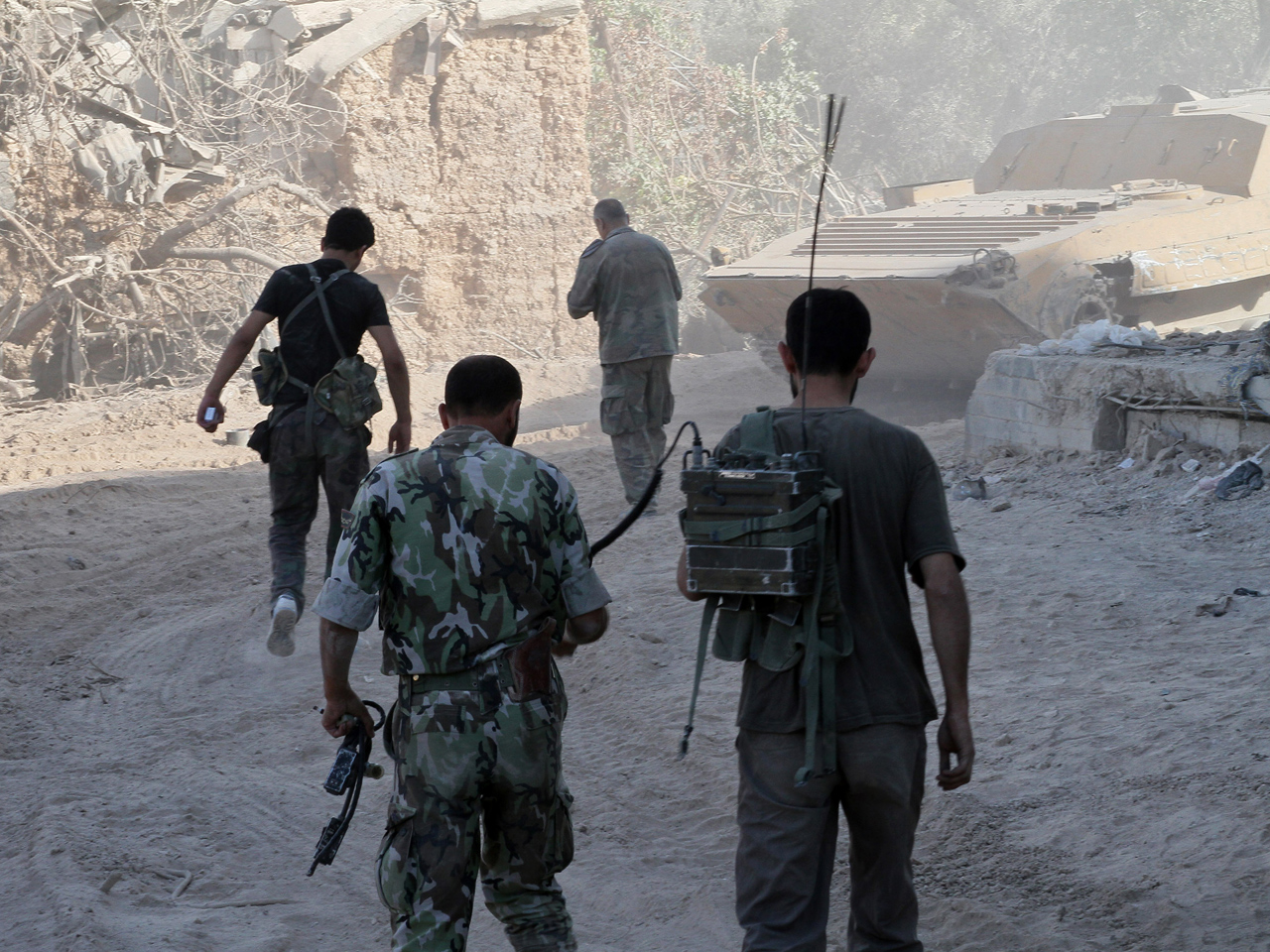 WASHINGTON A senior administration official said Sunday there is "very little doubt" that a chemical weapon was used by the Syrian regime against civilians in an Aug. 21 incident that killed at least 100 people, but added that the president had not yet decided how to respond. However, the Syrian government has claimed rebels were the ones who used chemical weapons in the incident.

The Syria Foreign Ministry said in a statement broadcast on state television Sunday the Assad regime has reached a deal to allow U.N. inspectors access to sites in the suburbs of Damascus where alleged chemical attacks occurred. A U.N. spokesman said the probe will start Monday.

"The Secretary-General has instructed the Mission under Dr. Sellstrom, currently in Damascus, to focus its attention on ascertaining the facts of the 21 August incident as its highest priority," said a spokesperson for the Secretary-General.

The deal appears to meet the demands of the world powers, including the U.S., Britain, France and Russia, all of whom called on the Syrian government to cooperate with the U.N. and grant inspectors access to the sites.

Anti-government activists and Doctors Without Borders say that more than 300 people were killed in the alleged toxic gas attack on the eastern suburbs of the Syrian capital. Images purporting to show the aftermath of the attack are filled with people gasping for breath and dead children unmarked by any wounds.

The eastern Ghouta area where the attack took place is under opposition control, which makes arranging a trip across the front lines difficult. Rebels and the main Western-backed opposition group have said they would guarantee access and the safety of a U.N. team to facilitate an investigation.

The U.N. team's determination of what happened is a highly sensitive matter because it will likely go a long way towards influencing foreign intervention in Syria's two-year-old civil war that has already claimed an estimated 100,000 lives. The U.N. inspector team, however, will not be determining whom exactly committed the attack.

Even as the pressure mounts for a strong international response, there is no guarantee that foreign powers will take action if the U.N. confirms chemical agents were used. But the scale of the attack makes this instance far harder to ignore than previous suspected cases.

The official said Kerry stressed that if the Syrian regime wanted to prove to the world that it had not used chemical weapons in this incident, it would have stopped shelling the area and granted immediate access five days ago.

A senior administration official told CBS News earlier that any belated move to allow the U.N. inspectors in is already too little, too late.

"At this juncture, any belated decision by the regime to grant access to the UN team would be considered too late to be credible, including because the evidence available has been significantly corrupted as a result of the regime's persistent shelling and other intentional actions over the last five days," the official said.

The senior administration official said the U.S. intelligence community based its assessment given to the White House claiming the Assad regime was responsible for the attack on "the reported number of victims, reported symptoms of those who were killed or injured," and witness accounts. The official spoke on condition of anonymity because the official was not authorized to speak publicly.

The official said the White House believes the Syrian government stonewalled the U.N. investigative team from getting immediate access to the site of the reported chemical weapons attack in the Damascus suburbs in order to give the evidence of the attack time to degrade.

Last Wednesday's purported chemical attack in the Damascus suburb of eastern Ghouta hasprompted U.S. naval forces to move closer to Syria. President Barack Obama met with his national security team Saturday to assess the intelligence and consider a U.S. military response, almost a year after warning the regime of Bashar Assad that chemical weapons use was a "red line" for the U.S.

The White House had concluded previously that the Syrian regime has used chemical weapons in limited incidents, but last week's attack is suspected of being the deadliest single incident of a civil war that has killed more than 100,000 people since March 2011.

While firm conclusions about the origin of the attack remain elusive, the leader of an al-Qaeda-linked Syrian rebel group vowed on Sunday to attack villages home to President Bashar Assad's minority sect to avenge the deadly alleged chemical weapons attack on opposition-held areas.

Jabhat al-Nusra leader Abu Mohammed al-Golani's comments came in an audio recording posted on a militant website that usually carries al Qaeda and similar groups' statements. It also appeared on the group's Twitter and Facebook accounts, although the authenticity of the claim could not be immediately verified.

Defense Secretary Chuck Hagel said on Thursday that a chemical attack "appears to be what happened."

The White House has approved limited lethal aid to Syrian rebels, but has limited weapons to mostly small arms and training. Obama described the factors limiting greater U.S. involvement in a CNN interview.

"If the U.S. goes in and attacks another country without a U.N. mandate and without clear evidence that can be presented, then there are questions in terms of whether international law supports it — do we have the coalition to make it work?" Obama said in the interview broadcast Friday. "Those are considerations that we have to take into account."

CBS News national security correspondent David Martin reported Friday that the Pentagon is making the initial preparations for a cruise-missile attack on Syrian government forces. Such an attack wouldn't happen until the president gives the green light, and it was clear during the interview on CNN Friday that he is not there yet.

Former Secretary of State Colin Powell said on CBS' "Face the Nation" on Sunday that the U.S. should be very careful about any potential intervention in Syria.

"We shouldn't go around thinking that we can really make things happen," Powell said. "We can influence things and we can be ready to help people when problems have been resolved or one side has prevailed over the other—that's when I think we can play a role."

Republican Sen. Bob Corker called for the U.S. to respond in a "surgical and proportional way, something that gets their attention." The Tennessee lawmaker said such a response should not involve U.S. troops on the ground, however.

Democrat Rep. Eliot Engel of New York said the U.S. must respond "quickly," together with NATO allies, possibly using cruise missile strikes, as the U.S. and NATO did in Libya.

Russia warned the United States on Sunday against repeating past mistakes, saying that any unilateral military action in Syria would undermine efforts for peace and have a "devastating impact" on the security situation in the Middle East, according to Reuters.

Referring to the United States' military intervention in Iraq, the Russian Foreign Ministry said in a statement that any military action would affect joint U.S.-Russian efforts for an international peace conference on Syria.

Defense Secretary Hagel offered no hints Sunday about likely U.S. response to Syria's purported use of chemical weapons, telling reporters traveling with him in Malaysia that the Obama administration was still assessing intelligence information about the deadly attack.

"When we have more information, that answer will become clear," he said when a reporter asked whether it was a matter of when, not if, the U.S. will take military action against Syria.

Asked about U.S. military options on Syria, Hagel spoke in broad terms about the factors Obama is weighing.

"There are risks and consequences for any option that would be used or not used — for action or inaction," he told reporters. "You have to come to the central point of what would be the objective if you are to pursue an action or not pursue an action. So all those assessments are being made."

If the U.S. wants to send a message to Assad, defense officials have previously indicated the most likely military action would be a Tomahawk missile strike, launched from a ship in the Mediterranean.

Iran, Assad's most powerful Middle East ally, warned the United States against crossing the "red line" on Syria, saying this would have "severe consequences".

"America knows the limitation of the red line of the Syrian front and any crossing of Syria's red line will have severe consequences for the White House," Massoud Jazayeri, deputy chief of staff of Iran's armed forces, was quoted by the semi-official Fars news agency as saying.

Gen. Martin Dempsey, chairman of the Joint Chiefs of Staff, said in a letter to a congressman last week that the administration opposes even limited action in Syria because it believes rebels fighting the Assad government wouldn't support American interests if they seized power. He said while the U.S. military could take out Assad's air force and shift the balance of the war toward the armed opposition, but that it's unclear where the strategy would go from there.

Dempsey is now in Amman, Jordan, set to meet with Arab and Western peers later Sunday to discuss ways to bolster the security of Syria's neighbors against possible attacks, chemical or other, by Assad's regime, a Jordanian security official said.

The meeting, closed to the press and held at an unspecified location, gathers chiefs of staff from Britain, France, Germany, Italy, Canada, Turkey, Saudi Arabia, Qatar and Jordan, the official said on condition of anonymity because he is not allowed to brief reporters.

Meanwhile, Gulf-based supporters have sent a 400-ton shipment of arms to Syria's outgunned rebels, one of the biggest to reach them in their two-year old uprising, opposition sources said on Sunday.