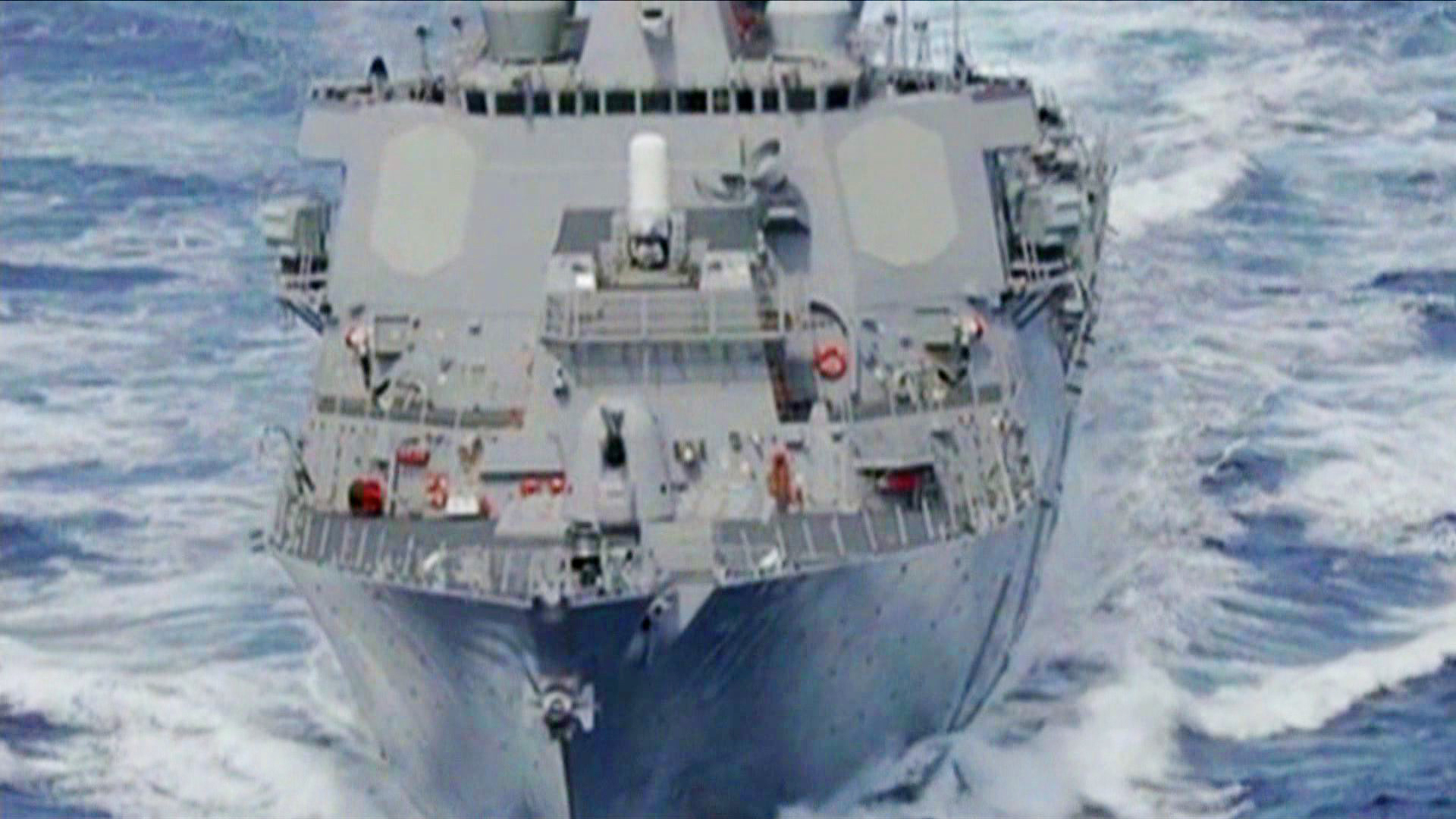 WASHINGTON U.S. intelligence officials sought Saturday to determine whether Syria's government unleashed a deadly chemical weapons attack on its people. At the same time, the Obama administration prepared for a possible military response by moving naval forces closer to Syria.

Meeting on the issue Saturday with his national security team, President Barack Obama received a detailed review of the range of options he has requested for the U.S. and its international partners to respond if the fact-finding process concludes that Syrian President Bashar Assad engaged in deadly chemical warfare, the White House said.

At the same time, Obama has emphasized that quick intervention in the years-old Syrian civil war was problematic because of the international considerations that should precede a military strike.

Obama discussed the situation in Syria by telephone with British Prime Minister David Cameron, the White House said. It was Obama's first known conversation with a foreign leader about Syria since the reports this week that hundreds of Syrians had been killed by the alleged chemical attack in a suburb of Damascus, the capital. On Saturday, the international aid group Doctors without Borders said more than 3,000 people were hospitalized in Syria Wednesday with what it called "neuro-toxic" symptoms -- about 355 of them died.

The White House said the two leaders expressed "grave concern" about the reported chemical weapons use, which both of their countries oppose.

A statement from Cameron's office at No. 10 Downing St. said the prime minister and Obama are concerned by "increasing signs" that this was "a significant chemical weapons attack" by the Syrian government against its people. Obama and Cameron "reiterated that significant use of chemical weapons would merit a serious response from the international community," according to the statement.

Noting that the U.N. Security Council has called for investigators to be granted immediate access to the area, Cameron's office said, "The fact that President Assad has failed to co-operate with the U.N. suggests that the regime has something to hide.?"

The Syrian government denies the claims. It also has warned the U.S. against taking military action, saying such a step would set the Middle East ablaze.

To underscore the regional concern about spillover effects of the Syrian conflict, U.S. Gen. Martin Dempsey, chairman of the Joint Chiefs of Staff, is attending a meeting starting Sunday in Jordan with Mideast defense chiefs.

Pentagon press secretary George Little said the meeting, co-hosted by the U.S. Central Command, has been planned since June. But Syria is high on the agenda.

CBS News national security correspondent David Martin reported Friday that the Pentagon is making the initial preparations for a cruise-missile attack on Syrian government forces. Such an attack wouldn't happen until the president gives the green light, and it was clear during an interview on CNN Friday that he is not there yet.

Officials have said Obama will decide how to respond once the facts are known.

"In coordination with international partners and mindful of the dozens of contemporaneous witness accounts and record of the symptoms of those killed, the U.S. intelligence community continues to gather facts to ascertain what occurred," the White House said after Obama's meeting, which included Secretary of State John Kerry, Defense Secretary Chuck Hagel and others.

Hagel declined Friday to discuss specific force movements while saying that Obama had asked the Pentagon to prepare military options for Syria. U.S. defense officials told The Associated Press that the Navy had sent a fourth warship armed with ballistic missiles into the eastern Mediterranean Sea but without immediate orders for any missile launch into Syria.

Navy ships are capable of a variety of military actions, including launching Tomahawk cruise missiles as they did against Libya in 2011 as part of an international action that led to the overthrow of the Libyan government.

"The Defense Department has a responsibility to provide the president with options for contingencies, and that requires positioning our forces, positioning our assets, to be able to carry out different options — whatever options the president might choose," Hagel told reporters traveling with him to Asia.

Hagel said the U.S. is coordinating with the international community to determine "what exactly did happen" near Damascus. According to reports, hundreds were killed in a chemical attack in a suburb. It would be the most heinous use of chemical weapons since Iraqi leader Saddam Hussein gassed thousands of Kurds in the town of Halabja in 1988.

A senior Sate Department official said that Kerry called the foreign ministers of Turkey, Jordan and Saudi Arabia as well as the Arab League secretary general Saturday regarding the alleged chemical attack in Syria. The State Department official also said that Kerry on Thursday contacted Syrian Foreign Minister Muallim to make clear that if the regime had nothing to hide, it should have permitted instant access to the site instead of attacking the affected area to damage evidence.

Meanwhile, as CBS News correspondent Holly Williams reported Saturday, both sides in the conflict are accusing each other of using chemical weapons to wage war. Syrian state TV broadcasted images of what the government claimed are chemical agents -- discovered by their soldiers in tunnels used by rebel forces in Damascus. The regime said this is evidence it's the Syrian opposition using chemical weapons, not them - though it is uncertain what's inside the small, plastic drums.

Also, Williams reported, devastating new video emerged right after the alleged chemical strike. CBS News can't independently verify them, but they show people gasping for breath, foaming at the nose and mouth, and suffering from convulsions -- all symptoms typical of a chemical attack. One image seems to show a family who never made it to hospital -- discovered dead in their own home -- but with no obvious injuries. It's all consistent with the use of a nerve agent. But that can't be proven until the U.N. weapons inspectors are allowed in to test soil and tissue samples.

Obama remained cautious about getting involved in a war that has killed more than 100,000 people and now includes Hezbollah and al Qaeda. He made no mention of the "red line" of chemical weapons use that he marked out for Assad a year ago, which U.S. intelligence says has been breached at least on a small scale several times since.

"If the U.S. goes in and attacks another country without a U.N. mandate and without clear evidence that can be presented, then there are questions in terms of whether international law supports it — do we have the coalition to make it work?" Obama said in a television interview broadcast Friday. "Those are considerations that we have to take into account."

Obama said in the interview with CNN's "New Day" that the episode is a "big event of grave concern" that requires American attention. He said any large-scale chemical weapons usage would affect "core national interests" of the U.S. and its allies. But nothing he said signaled a shift toward U.S. action.

U.S. defense officials spoke on condition of anonymity because they weren't authorized to discuss ship movements publicly. But if the U.S. wants to send a message to Assad, the most likely military action would be a Tomahawk missile strike, launched from a ship in the Mediterranean.

For a year now, Obama has threatened to punish Assad's regime if it resorted to its chemical weapons arsenal, among the world's vastest, saying use or even deployment of such weapons of mass destruction constituted a "red line" for him. A U.S. intelligence assessment concluded in June that chemical weapons have been used in Syria's civil war, but Washington has taken no military action in response.

U.S. officials have instead focused on trying to organize a peace conference between the government and opposition. Obama has authorized weapons deliveries to rebel groups, but none are believed to have been sent so far.

In his first comments on Syria since the alleged chemical attack, Obama said the U.S. is still trying to find out what happened. Hagel said Friday that a determination on the chemical attack should be made swiftly because "there may be another attack coming," although he added that "we don't know" whether that will happen.

After rebels similarly reported chemical attacks in February, U.S. confirmation took more than four months. In this instance, a U.N. chemical weapons team is already on the ground in Syria.