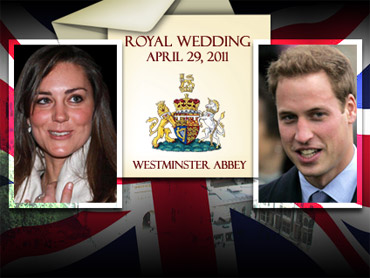 It's already being called "the wedding of the century."

And the day has been declared a holiday in Britain, reports CBS News Correspondent Mark Phillips.

The choice of the Abbey comes as no surprise. Kate was photographed emerging from it one evening last week after her engagement to the future king of England was announced.

Kate wants to keep her gown secret from William, according to a senior royal aide, who adds that the wedding will be paid for by the both families -- the royals and the Middletons.

William and Kate are taking charge of the arrangements, to the extent they can of such a large affair, says Phillips.

"They're hoping that it's celebrated right across the country, in street parties and the like," Phillips says.

He calls the abbey a "very bold choice for the couple. Of course, everyone's vivid memories of Westminster Abbey are of the funeral service, the very poignant one, for Princess Diana, William's mother. But William has, in fact, embraced Diana's memory all the way through the planning for this wedding. Of course, he gave Kate his mother's engagement ring and now, the wedding will take place in the abbey, which is at the very center of English historic royal life, and will now have another large royal occasion to celebrate.

"This will be a grand royal wedding. It's unclear if they'll be using carriages or cars. That will depend on the weather.

"It will be a semi-state occasion, which is to say the guest list will be the great and the good, not just from this country, but from various places around the world.

"The couple wanted this wedding in the spring. There had been talk that it might have been even earlier, but the end of April is more reliable, weather-wise."

Phillips added that, "The 29th of April is, according to the Church calendar, the Feast of Saint Catherine, so this wedding will be what weddings should be, all about the bride!"