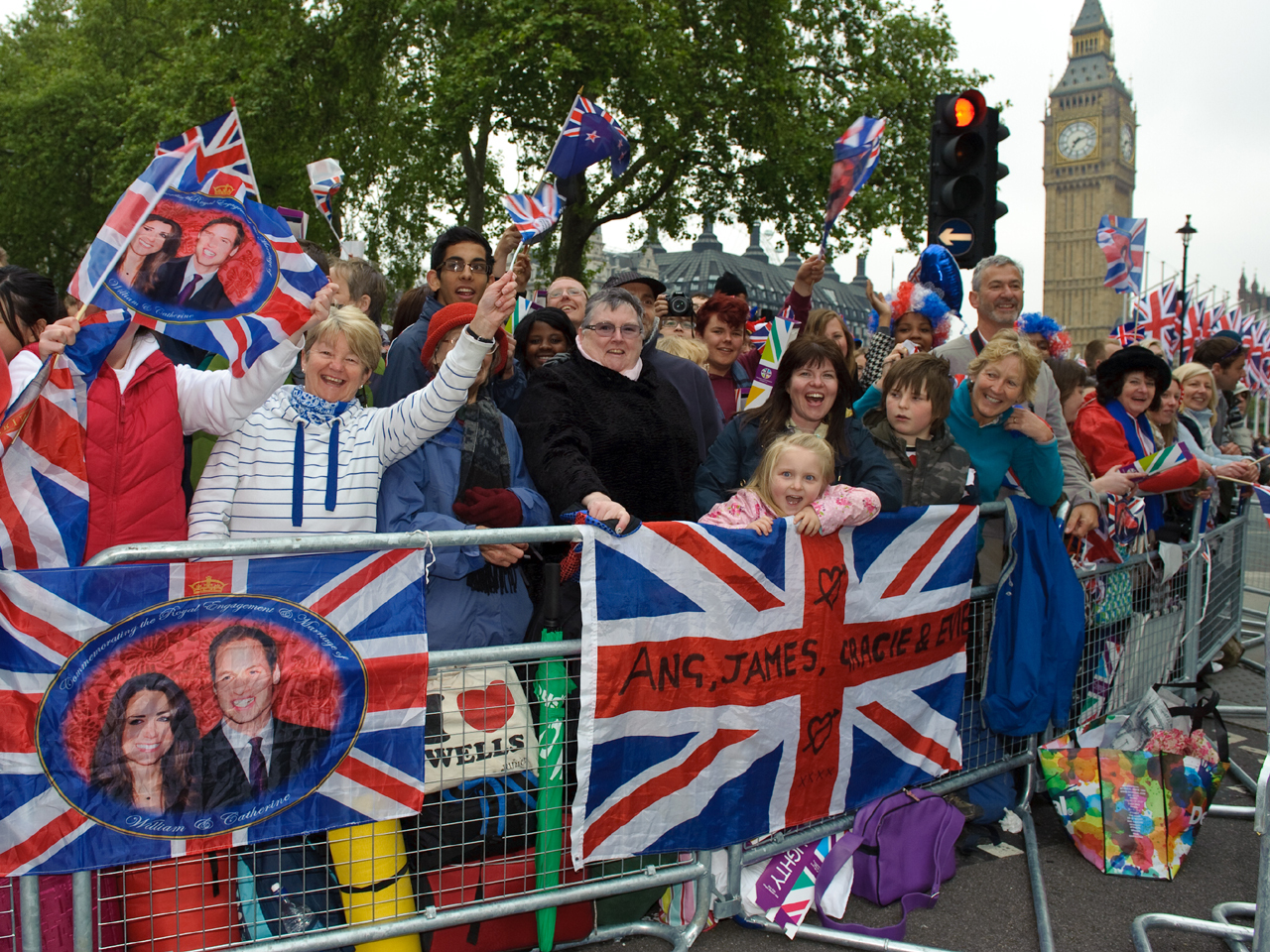 LONDON (AP) - From Buckingham Palace to Westminster Abbey, royal fans lined the streets of London by the tens of thousands Friday, hoping to snatch a glimpse of history as Prince William weds Kate Middleton in a marriage expected to revive Britain's beleaguered monarchy.

About 45 minutes before the ceremony was due to begin, Prince William and his brother and best man Prince Harry left their official residence at Clarence House for London's storied Westminster Abbey. They drove down The Mall - a broad avenue through central London - and waved at thousands of adoring fans lining the route.

The royal family announced three hours before the main event that Prince William and Kate would gain the titles of Duke and Duchess of Cambridge following their nuptials.

A third of the planet was to watch as the future king and queen of England start their lives as husband and wife with the two simple words "I will," ending months of buildup and sealing their love with the most public of spectacles.

Celebrities, sports stars and royalty flocked to Westminster Abbey before the royal wedding.

The Great North Door opened Friday morning under three hours before the ceremony was due to begin.

All the clamoring over every detail - the wedding dress, her hair, her makeup, the romantic kiss on the Buckingham Palace balcony, the honeymoon - finally will be answered.

Save perhaps for the biggest question of all: Is this one royal couple who will live happily ever after?

Will their union endure like that of Queen Elizabeth II and Prince Philip, now in its 64th year, or crumble spectacularly like that of Prince Charles and Lady Diana Spencer, William's own parents?

Recent history augurs badly: The first marriages of three of the queen's four children ended in divorce. But the couple's chemistry brings confidence that this one will work.

William and Kate look fantastic together, seeming to glow with happiness in each other's company, and unlike Charles and Diana they've had eight years to figure out they're made for each other.

But the fate of their marriage will depend on private matters impossible for the public to gauge amid the hoopla. A beautiful bridal gown and eye-popping sapphire and diamond engagement ring do not guarantee a happy ending. Money, power, beauty - it can all go wrong if not carefully nurtured.

Much will depend on whether 28-year-old William and 29-year-old Kate can summon the things every couple needs to make a marriage work: patience, love, wit and wisdom. But they face pressures most of the world doesn't: the twin burdens of fame and scrutiny.

These are the thorny issues upon which the fate of the monarchy rests, as the remarkable Queen Elizabeth II, now 85, inevitably ages and declines.

With just hours to go, dedicated royal watchers camped outside got an unexpected surprise - a visit from Prince William.

The groom-to-be emerged from his residence Thursday night to greet the hordes of well-wishers gathered along the processional route. Dressed in khakis and grinning broadly, William shook countless hands as his photo was snapped on cell phones and digital cameras.

By dawn on Friday, crowds were awake and waving flags for television cameras under steely gray skies. Technicians ran last-minute checks on huge television screens that will broadcast the ceremony at Trafalgar Square.

Despite the forecast of scattered showers, William and Kate Middleton will brave the elements and travel from the abbey to Buckingham Palace in an open-topped carriage, royal officials said.

Everything is set: The rehearsals have been held, the cakes have been baked, the toast of the best man (William's brother Harry) written, suits and uniforms pressed, hats carefully chosen, shoes buffed, flowers arranged and the champagne put on ice for two exclusive receptions at Buckingham Palace.

Hundreds of street parties are planned as Britons celebrate part of the heritage that makes them unique - and overseas visitors come to witness traditions they've admired from afar.

"It's part of history," said Norene Shultis of Madison, Wis., who arrived in London Thursday after an overnight flight. "It's so different from the United States. We don't have royalty. And we think William and Kate will be a good couple and do lots of good things and live happily ever after."

The government has declared a national holiday, universally welcomed by schoolchildren, and there has been a marked proliferation of Union Jacks in the last week as London spruces up for the big event, which has drawn thousands of journalists and hundreds of thousands of visitors from overseas.

Some 1,900 immaculately dressed guests, including fellow royals from around the world, a smattering of pop stars, sports idols and dignitaries, will jam Westminster Abbey.

Though the designer of Middleton's dress remains a mystery, William surprised royal watchers with the announcement that he was wearing the scarlet tunic of an Irish Guards officer. Observers had expected the groom, a highly trained helicopter rescue pilot, to wear his navy blue air force uniform.

William's choice of ceremonial military dress sends a strong signal of his support for the armed forces, reinforcing his preferred image as a dedicated military man and distancing him from past characterizations as a club-hopping party boy.

A number of famous people were left off the guest list, including President Barack Obama and most other world leaders. Also not invited were Britain's last two prime ministers, Tony Blair and Gordon Brown, in a snub to their Labour Party, which traditionally is not as strong a backer of the monarchy as the ruling Conservatives. The invitation for Syria's ambassador was rescinded Thursday because of Britain's unhappiness with the bloody government crackdown in his country.

The wedding is expected to be watched by 2 billion people across the globe and draw a million well-wishers - as well as some protesters - into the historic environs surrounding Buckingham Palace, Westminster Abbey and other London landmarks.

The celebration will be British to the core, from the freshly polished horse-drawn carriages to the sausages and lager served at street parties. Some pubs were opening early, offering beer and English breakfasts - sausages, beans, toast, fried eggs and bacon - to wedding fans who wanted to watch it on TV.

"It's that mixture of the good-looking prince and the beautiful princess, but it's so much more than that," he said. "It's this institution that's helped bind the country together. And it's got this amazing history that goes way, way back."

But the wedding, like any wedding, is fundamentally about two people. Will their lives together, starting with such high hopes, be blessed by good fortune, children, good health, productive work?

All this is set against a backdrop of intense public interest, simply because William is second in line to the British throne, born to be king.

The royals fervently hope that a joyous union between William and Kate will rub out the squalid memories of Prince Charles and Princess Diana embarrassing each other and the nation with a string of accusations and confessions of adultery as their marriage slid toward divorce.

And there is no small irony in the sight of Americans waking up before dawn (East Coast) or staying up all night (West Coast) after their fellow countrymen fought so fiercely centuries ago to throw off the yoke of the British monarchy and proclaim a country in which all men are created equal.

"We have celebrities. Hollywood, that is kind of our royal family and it is not the same. We are just so happy for Will and Kate and having followed them from growing up, it's just very exciting," said Julie Lischer, an American tourist from Atlanta, Georgia.