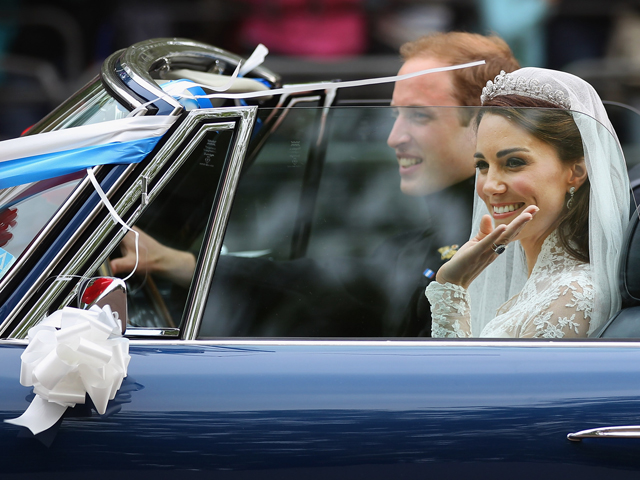 (CBS) Here's where we'll be posting all our royal wedding news, pictures and video for Friday, April 29. We'll be updating throughout the day, so be sure to check back here to see what's new.

Kate Middleton slipped into a secondgown by Alexander McQueen's Sarah Burton for the post-wedding dinner dance at Buckingham Palace.

The more party-appropriate dress is made of white satin and features a circle skirt, a sweetheart neckline and an embellished waistband. Middleton, who let her hair down for the event, completed her look with a white shrug.

Before her wedding to Prince William, Kate Middleton was said to have admired the wedding gown worn by film actress Grace Kellywhen she married Prince Rainier of Monaco in April of 1956.

"I'm glad the weather held off," the bride said upon leaving for Buckingham Palace, according to the UK's Press Association. "We had a great day."

2.:56 p.m. EDT - Prince William and Kate Middleton are back at Buckingham Palace

Britain's new royal couple have returnedto Buckingham Palace for the evening reception. Kate Middleton is reportedly not wearing the same lace Alexander McQueen dress she was married in. She is said to be wearing a different white dress, also to have been designed by McQueen creative director Sarah Burton.

Prince Charles and his wife, Camilla, Duchess of Cornwall, have left Clarence House for the evening dinner reception at Buckingham Palace.  Prince William and Kate Middleton are expected in the car after them.

Queen Elizabeth II, who departed for a private weekend with her husband, Prince Philip, will also skip out on Michael Middleton's father-of-the-bride address.

Britain's Prime Minister David Cameron said Prince William and Catherine, Duchess of Cambridge's wedding was "incredibly romantic" and "very much like a fairy tale," according to BBC News.

BBC News reports that Queen Elizabeth II has left Buckingham Palace following her post-wedding luncheon and is "being flown off for a private weekend in the U.K.

Prince William and Catherine Middleton have arrived at Clarence House for what the palace calls "a period of reflection." They'll be back at Buckingham Palace at 2 p.m. EDT (that's 7 p.m., London time) for a more intimate evening celebration, hosted by Prince Charles, for about 300 guests.

The Duke and Duchess of Cambridge left Buckingham Palace in a blue Aston Martin convertible with "JU5T WED" on the license plate.  The prince is driving, with his bride in the passenger seat.

Queen Elizabeth II is hosting a luncheon for around 650 guests from this morning's wedding congregation. Guests will be served canapes, champagne, wedding cake and a chocolate biscuit cake specially requested by Prince William.

The pair share a brief kiss on the Buckingham Palace balcony as crowds cheer below. A second, equally short kiss followed a minute later.

8:26 a.m. EDT - Prince William and Catherine step out on the balcony

The Duke and Duchess of Cambridge step out on the Buckingham Palace balcony, along with the Queen and their wedding party, to greet the crowds.

Crowds are gathering outside the palace to catch a glimpse of the newly-married Prince William and Kate Middleton, who will soon emerge onto the balcony to greet the crowds and share a kiss.

BBC News reports that Queen Elizabeth II said her grandson's wedding was "amazing" when she arrived to Buckingham Palace following the ceremony at Westminster Abbey.

Middleton wore a Cartier tiara lent to her by Queen Elizabeth II. Her earrings, designed by Robinson Pelham, were made to echo the tiara. Read more here.

Prince William and Kate Middleton depart Westminster Abbey in 1902 State Landau carriage. William salutes the crowd and the couple waves as the procession continues down the street.

The couple, as husband and wife, emerge from signing the wedding register. The couple and their wedding party walk back down the aisle at Westminster Abbey as the congregation stands.

6:55 a.m. EDT - Couple depart to the Shrine of St. Edward the Confessor

Prince William and Kate Middleton depart to the Shrine of St. Edward the Confessor for the signing of the Registers.

6:46 a.m. EDT - All in the congregation sing "God Save the Queen" except for the Queen

The Queen looked stoic as her husband, Prince Philip, The Duke of Edinburgh, sang beside her.

The Archbishop pronounces Prince William and Kate Middleton man and wife - the crowd are heard celebrating outside.

Prince William and Kate Middleton's wedding ceremony at Westminster Abbey is underway. She walked up the aisle to the strains of Charles Parry's "I Was Glad." When she arrived at the alter, William said, "You look beautiful."

At the alter, William turned to Michael Middleton and joked, "We were supposed to just have a small family affair."

You can follow along with the wedding service in the official Order of Service, available at the Royal Wedding website.

Kate Middleton's dress is by Sarah Burton at Alexander McQueen. Get more details on the dress here. Her tiara is a Cartier piece lent to her by Queen Elizabeth II.

5:53 a.m. EDT - Kate Middleton is on her way to Westminster Abbey

Prince William's bride-to-be is being driven from London's Goring Hotel to the wedding venue. Crowds are getting a glimpse at her dress - it's long sleeved, with what looks like lace detail, and a veil.

The queen and the Duke of Edinburgh are on their way to Westminster Abbey. The queen is wearing an Angela Kelly designed single crepe wool yellow dress with hand-sewn beading at the neck in the shape of sunrays, and a matching double crepe wool tailored coat.

Carole Middleton and James Middleton have taken their seats inside Westminster Abbey.

William is wearing the uniform of Colonel of the Irish Guards to reflect his senior honorary appointment in the Army. His uniform features a red tunic, a forage cap, a gold and crimson sash and gold sword slings (though he will be without a sword). He completes the look with the Garter Sash with the Wings of the Royal Air Force, the Garter Star and the Golden Jubilee Medal.

Harry is wearing the uniform of a Captain of the Household Cavalry, known as the Blues and Royals, with a forage cap. He is also wearing aiguillettes, a cross-belt and gold waist belt with sword slings, but no sword.

5:13 a.m. EDT - Prince William and Prince Harry are on their way to Westminster Abbey

Prince William and his best man, brother Prince Harry, are on their way to the royal wedding venue. The pair are waving at the crowds as they drive by.

Britain's Prime Minister David Cameron has arrived with his wife, Samantha, who is not wearing a hat.

From the Royal Wedding website: "Mrs. Carole Middleton is wearing a sky blue wool crepe coatdress with matching satin piping and passementerie at the waist and cuff over a sky blue silk shantung 'Sydney' day dress with short pleated sleeves and pleated pockets. The dress and coatdress are by Catherine Walker. Mrs. Middleton's hat is by Berkshire-based Jane Corbett."

5:06 a.m. EDT - London mayor to give William and Kate a tandem bike

One of Prince William and Kate Middleton's wedding gifts may help them fight post-wedding weight gain like the rest of us experience: London mayor Boris Johnson will give the couple a tandem bicycle.

Major was the prime minister after Margaret Thatcher. Following the death of Princess Diana, he was appointed a guardian to Prince William and Prince Harry with responsibility for legal and administrative matters.

Prince William is President of The Football Association. The Los Angeles Galaxy star and his wife are wearing hats designed by Philip Treacy.

Guests started arriving at the Abbey about two and a half hours before the ceremony gets underway. Nearly 2,000 invited guests were to pack the ancient church - the spiritual home of Britain's monarchy - by 11 a.m. local time.

Creations from famed British hat designer Philip Treacy will be seen atop the heads of Camilla, Duchess of Cornwall, Princesses Beatrice and Eugenie of York and Zara Phillips at today's royal wedding. Victoria and David Beckham will also be sporting Treacy hats, according to a release from the designer.

3:00 a.m. EDT - William and Kate will be the Duke and Duchess of Cambridge

There are more people on the streets leading to and around the Abbey, with lots of people coming out from the nearby Westminster tube stop and walking over. The souvenir sellers are out and there are plenty of them.

Rev. John Robert Hall, the Dean of Westminster Abbey, tells Sky News he's a little nervous. "But nervous and excited are very similar things, and I'm very excited." He says he was thinking about trying to help calm the royal couple's nerves upon greeting them with a joke or two but now "can't imagine doing that." He says Kate Middleton seems like a very calm person anyway.

At 7:00 a.m. in London - 2:00 a.m. Eastern - the weather forecast is for partly cloudy skies and 10 C (about 50 F). The BBC predicts clouds for most of the day with sunny intervals beginning around 1 p.m. in London. That's an improvement over the heavy showers that were forecast earlier in the week.

At 5:00 a.m. in London - midnight Eastern - there are light crowds outside Westminster Abbey and Parliament. The number of people at the Abbey doesn't seem to have changed much since earlier in the day.

There doesn't appear to be anyone lining the barricades on Whitehall Street at the moment.