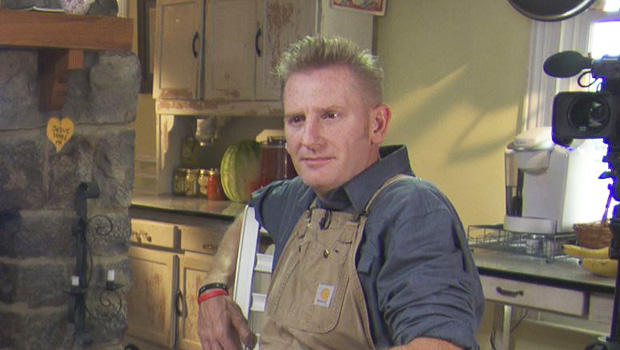 Joey and Rory Feek rose from unknowns to winners of the ACM Award for Top New Vocal Duo a few years back. What happened since is a heartbreaking story brought to us by Anthony Mason:

Rory Feek spent 14 years on a farm in Pottsville, Tennessee, with his wife, Joey.  When their country music career took off, they converted their barn into a concert hall.

“And they’d say, ‘Ladies and gentlemen, from clear across the parking lot, Joey and Rory!’” he recalled to Mason. “And we would walk on stage, and it was special. It was so good.”

But early this year, just as their album, “Hymns That Are Important to Us,” debuted atop the country chart, Joey lost a two-year battle with cancer. She was 40.

“You had time to prepare for this,” Mason said. “At the same time, nothing prepares you for this.”

“I don’t know if I expected it to be as heavy as it is, because we had so much time to prepare for it,” Rory said. “But I think it’s that heavy when she’s that wonderful.”

For the past few months on the farm, Rory has been working on a documentary to be released this week. “This whole experience of making the film has been incredible because I get to see Joey every day,” he said.

“To Joey, With Love” is the story their relationship.

Rory, a songwriter was a single father with two teenage daughters, and Joey was working at a veterinary clinic when they met.

“She kind of picked you out, didn’t she?” Mason asked.

“My wife stalked me! That’s what she says. She actually saw me play at a songwriter’s night in Nashville at the Bluebird Cafe. And that’s proof that there’s a God. Because there’s no way I could have landed that girl without His help!”

In 2008, a friend persuaded them to audition for the CMT show, “Can You Duet”:

“The whole time I just said, ‘Nah, this is not gonna happen, they’re not gonna let a 42-year-old man in overalls stand next to this beautiful girl and have a career.’”

They came in third, and soon had a recording contract -- and their own TV show on the RFD network.

Then in 2014, their daughter, Indiana, was born with Down syndrome. Thirteen weeks later, at Joey’s checkup, doctors discovered cancer in her cervix.

Rory says she had extraordinary optimism. Mason asked, “Where did her strength come from, do you think?”

“She just believed God had a bigger plan,” Rory said. “That everything’s going to be okay, even if it’s not okay.”

Joey’s surgery first appeared to have removed the cancer, but it came back. She fought to see her daughter’s second birthday.

Mason asked, “How did you feel when she finally said, ‘I just can’t fight this battle anymore’?”

“You weren’t as ready as you thought you were?”

“No, I wasn’t as ready. None of us are,” Rory said. “It’s been, I don’t know, how long? Five months? And I’m still not quite ready. That’s the biggest thing I struggle with -- I still walk around thinking, ‘She’s really not here? She’s really not coming back?”

At the rear of Rory Feek’s 60 acres, under a cluster of sassafras trees, is a cemetery, where the family that built the farm in the 1800s is buried. in March Joey Martin Feek was laid to rest there.

Rory admitted, “I just can’t bring myself, for some reason, to go and order a stone yet. I don’t know why, I just can’t. I don’t know if it’s that she’s so simple a wooden cross is part of what she would like. It probably has something to do with permanence.”

“You’ve got a bench here. Do you come out every day?”

“Almost every day. I got a place for my coffee and hers. And we still have coffee together.”

Rory says their daughter, Indiana is doing well: “She’ll just sign ‘Mama’ and say ‘Mama’ every once in a while. But usually it’s in the car, ‘cause she wants to hear Mama sing.”