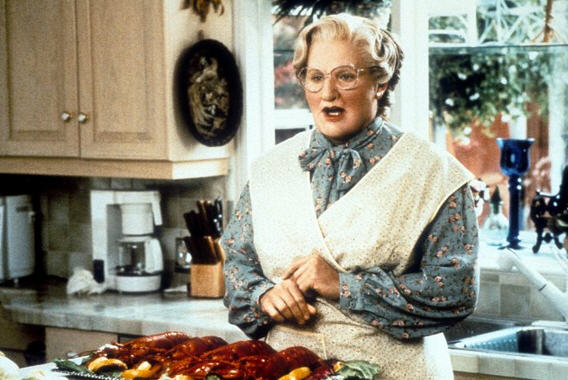 The death of actor and comedian Robin Williams of an apparent suicide Monday shocked and saddened Hollywood stars and movie lovers alike.

At 63, Williams leaves behind a career that spanned decades, from comedy to television to many unforgettable roles on the big screen. Those included a unconventional poetry professor, a kindly British nanny and a manic cartoon genie. Here's a list of 10 of our all-time favorites:

On of Williams' first breakout film roles was his portrayal of a radio DJ in Saigon in 1965 during the Vietnam War. Cronauer's unorthodox style wasn't too popular with his superiors, but it gave Williams plenty of opportunities to do what he did best.

Williams played a spirited English teacher at a stuffy New England boarding school who taught his students to appreciate poetry and seize the day through his unconventional teaching methods. At the end, the boys take to their desks and show their support for Keating by quoting Walt Whitman's "O Captain! My Captain." The role earned Williams an Oscar nomination.

Williams earned raves playing a doctor who administered a new drug that revived patients (including one played by Robert De Niro) who had been in a catatonic state for decades. As they are reintroduced to the world, he rediscovers the joys of life along with them.

Williams played a grown-up version of the boy who once refused to grow up in this Peter Pan tale. When Captain Hook (Dustin Hoffman) kidnaps his children, an adult Peter -- now a busy and absent corporate lawyer -- must return to Neverland and recapture his youthful spirit in order to rescue them.

He had phenomenal cosmic powers and itty bitty living space -- Willaims' blue-hued, manic genie was one of the highlights of this animated Disney film. His performance is strewn with rapid-fire pop culture references, impressions and the couldn't-get-it-out-of-your-head-if-you-wanted-to song, "Friend Like Me."

Talk about going above and beyond for your kids -- in this 1993 classic, Williams played a voice actor who, after a bitter divorce, poses as an elderly British nanny (one who can still kick a soccer ball and dance around with the vacuum cleaner, though) to spend more time with his children. A sequel was in the works at the time of the actor's death.

Williams played a young boy who became trapped in the magical board game of the movie's title, only to be freed by two other youngsters who stumble upon it 26 years later. He's then forced to play once again, and face the wild animals and other dangers it unleashes, until they finally finish the game.

This remake of "La Cage aux Folles" starred Williams as the partner of a gay nightclub owner (Nathan Lane) who dresses in drag when their son brings his new fiancee and her moralistic parents home to meet them.

Williams earned a best supporting actor Oscar for his role as a therapist who helps a troubled M.I.T. janitor and math prodigy find direction in his life. If you didn't already know the actor could tackle serious roles as deftly as comedic ones, here's the proof.

Theodore Roosevelt in "Night at the Museum" (2006) and sequels

There are many other movies with memorable Williams roles, but we'll finish this list with a more recent example of his comedic talents. He played a rousing Theodore Roosevelt in this family-friendly pic, and reprised the role in a 2008 sequel and a third film, "Night at the Museum: Secrets of the Tomb," which is due to come out on Dec. 19, 2014.

Tell us: What's your favorite Robin Williams movie role? What other movies would you like to see on the list?