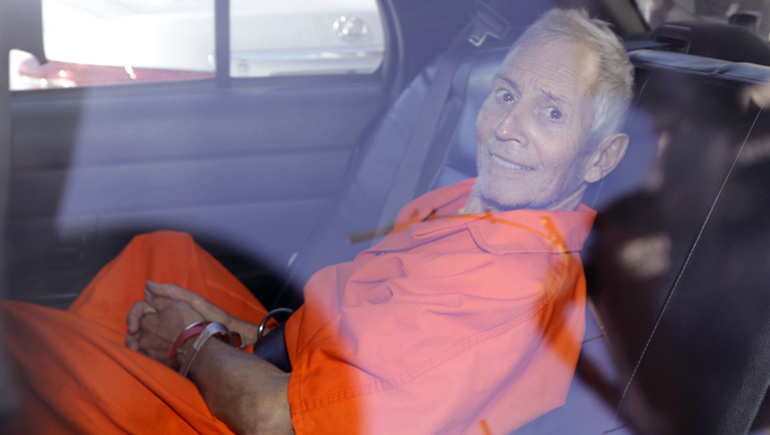 NEW ORLEANS - A magistrate has ordered that millionaire Robert Durst - who is accused of killing a female friend in California 15 years ago - be held without bond on weapons charges in Louisiana.

Magistrate Harry Cantrell said that based on what he heard in Monday's bond hearing and on court documents, the 71-year-old Durst is both a flight risk and a danger to others.

Durst was seated beside his lawyers, his hands shacked to his sides in padded cuffs during the hearing Monday. He has been in a Louisiana prison's mental health unit for nearly a week. Officials have called him a suicide risk.

Durst's lawyers say his arrest was illegal and was orchestrated to coincide with the last episode of an HBO show about him and his links to three people who were killed.

At Monday's bond hearing, the defense argued for him to be released while prosecutors said they wanted him held without bond.

Defense attorney Dick DeGuerin asked during Monday's hearing that DA-turned-TV-host Jeanine Pirro be removed from the courtroom because she's a potential witness. He said he wanted to question her.

But Magistrate Harry Cantrell ruled that Pirro would not testify.

Pirro - a Fox News Channel host and former district attorney in New York's Westchester County, where she investigated the still-unsolved disappearance of Durst's first wife - returned to the courtroom with a small smile.

Durst's lawyers say he was illegally arrested March 14 at a New Orleans hotel on both the weapons charges and on a Los Angeles County warrant accusing him of murder.

Lawyers DeGuerin and William Gibbens outlined their arguments in court papers filed last week. One of the weapons charges alleges that Durst had a .38-caliber revolver; his previous felony convictions make that illegal. The other charge alleges he had an illegal weapon and drugs: more than 5 ounces of marijuana.

Prosecutors have not said whether they will bring those charges before a grand jury.

None of Durst's previous convictions are serious enough to merit a felon-in-possession charge, his attorneys say.

Durst was arrested at the J.W. Marriott Hotel. He had been registered there under the name Everette Ward, and a search of his hotel room turned up his passport, nearly $43,000 in cash, a gun and a rubber or latex mask that could cover his head and neck, according to a search warrant for his Houston condo. Prosecutors also claim they intercepted a package containing $117,000 dollars in cash he shipped to himself at the hotel where he was arrested.

Durst, a member of a wealthy New York real estate family, is charged with murder in California for the December 2000 shooting death of Susan Berman.

Prosecutors claimed before his capture he had become quite adept at evading authorities. They said he'd been using several aliases and had cut back on cellphone usage to avoid detection. But he wasn't careful enough. Prosecutors said the FBI located where Durst was staying when he used a hotel phone to check his voicemail.

He was arrested one day before the finale of "The Jinx," the HBO show about his links to his first wife's disappearance in 1982; the death of Berman, a mobster's daughter who acted as his spokeswoman after his wife went missing; and a 71-year-old neighbor in Texas whose dismembered body was found floating in Galveston Bay in 2001. Durst has been tried only for the Texas killing, and he was acquitted of murder.

Durst waived extradition in New Orleans but is being held on the weapons charges.