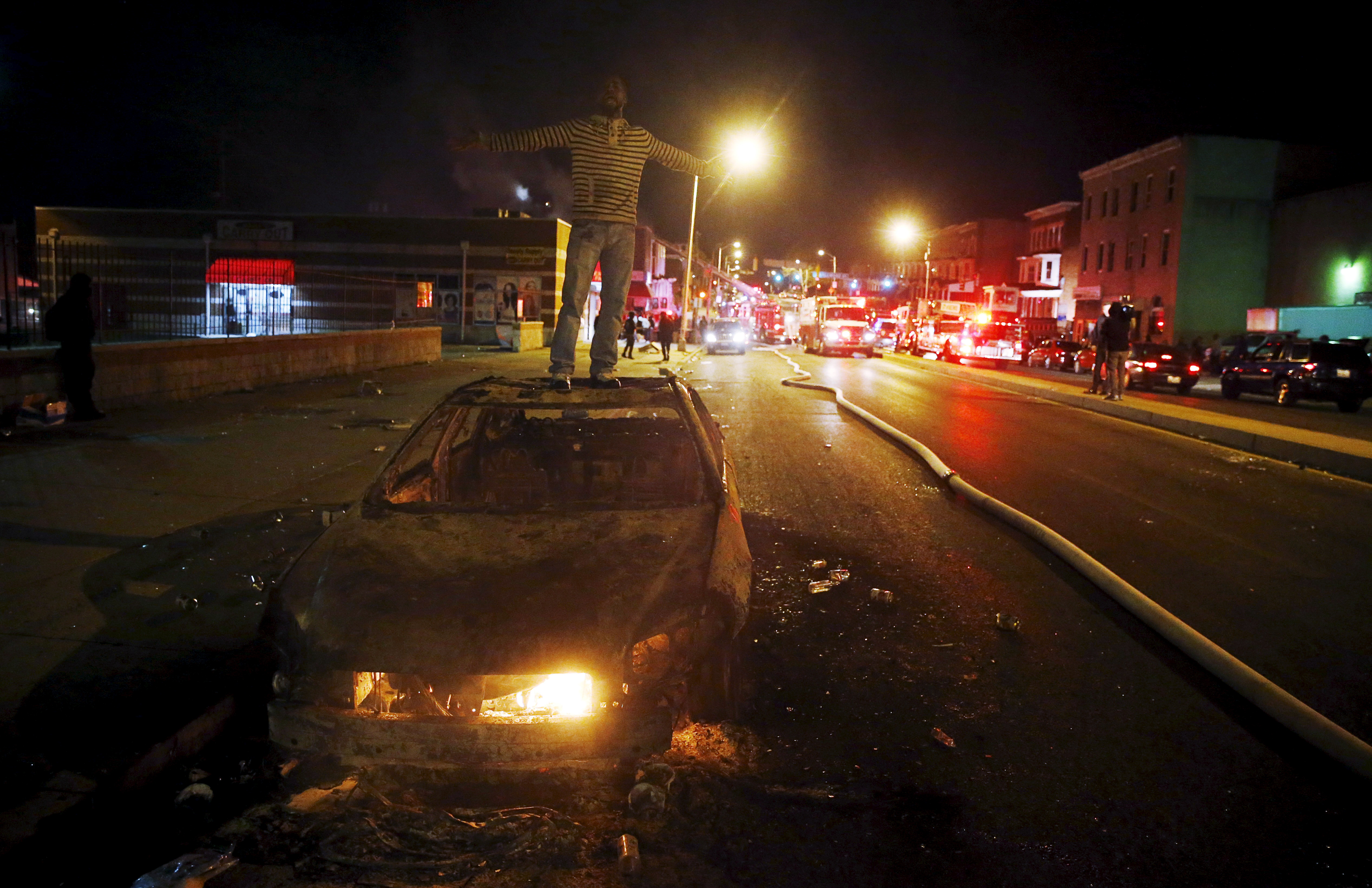 BALTIMORE -- Fires blazed throughout Baltimore as the night progressed after the city erupted in chaos Monday. From the afternoon and into the evening, unrest continued after the funeral of Freddie Gray, the 25-year-old who died from unexplained spinal injuries suffered while in police custody.

The violence, which left 15 police officers injured, six seriously, prompted Mayor Stephanie Rawlings-Blake to implement a 10 p.m. through 5 a.m. curfew citywide for the next week beginning Tuesday, which she said could be extended if necessary. The curfew is in addition to an existing one for juveniles.

"It is very clear there is a difference between what we saw over the past week with the peaceful protests...and the thugs who only want to incite violence and destroy our city," said Rawlings-Blake. "Too many people have spent generations building up this city for it to be destroyed by thugs who, in a very senseless way, are trying to tear down what so many have fought for."

"Baltimore City families deserve peace and safety in their communities, these acts of destruction cannot and will not be tolerated," said Hogan at a Monday evening press conference shortly after.

Baltimore Police Commissioner Anthony Batts said the city was "calming itself down, slowly but surely." But he also spoke sternly about those who participated in the unrest. "This is not protesting. This is not your First Amendment rights. This is criminal activity."

In the midst of the violence, a three-alarm fire on the city's east side broke out. Mayoral spokesman Kevin Harris confirmed that the fire is related to the riots and that it's burning the Mary Harvin Transformation Center, described online as a community-based organization that supports youth and families, the Associated Press reported.

Gray's family had appealed for peace after demonstrations against police brutality and Gray's death turned violent Saturday evening. They asked protesters to hold off on demonstrating until Gray could be laid to rest.

A flier circulated on social media called for a protest Monday afternoon to begin among high schoolers at the Mondawmin Mall and move downtown toward City Hall. It was intended to be peaceful but turned to violence before long, CBS Baltimore reported.

An official with the Baltimore Police Department said Monday evening that 15 officers have been severely injured so far, including one who was rendered unconscious.

"We have been able to get our injured officers out of the area and they are now receiving medical treatment," according to a Twitter post from the Baltimore PD.

CBS Baltimore reports that a line of officers with helmets and face shields blocking off the mall's parking lot. Some people were throwing objects at officers and a police armored vehicle.

The violence eventually led to looting in at least one spot as a crowd broke into a CVS store and began taking items, CBS Baltimore said. The company said it would be closing other nearby stores as a precaution.

Emergency officials were constantly thwarted as they tried to restore calm. Firefighters trying to put out a blaze at the drug store were hindered by someone who sliced holes in a hose connected to a fire hydrant, spraying water all over the street and nearby buildings.

Nearby, a police car was set on fire. Motorists were advised to avoid several areas where groups have become aggressive toward police.

A group also looted a check-cashing business and other stores in Baltimore, busting through the windows and climbing inside to take items.

As people arrived home from work, some yelled at the youths to stop causing trouble.

"I never thought I'd see something like this happen in my neighborhood," Ted Bushrod, 32, who's lived in the area all his life, told the AP.

Bushrod, who said his father died in an officer-involved shooting involving the Baltimore Police Department, criticized the violence.

"It's disappointing. I understand the kids' frustration. We go through this every day," he added, referring to black people being targeted for their race in Baltimore.

Other businesses closed early to let employees avoid any violence, and as a precaution the Baltimore Orioles tweeted that they had postponed their evening game against the Chicago White Sox.

The University of Maryland campus in downtown Baltimore shut down its campus at 2 p.m., saying it was warned by the Baltimore Police Department that "activities" in the area may turn violent.

In an alert to students and staff, the university says "the safety of our students and employees is of paramount importance. Please vacate the campus as soon as possible."

School spokesman Alex Likowski said he didn't know what type of activity might be passing through campus or what prompted the warning from police.

The university's main campus is in College Park, about 30 miles south of Baltimore.

Late Monday afternoon, police tweeted openly to parents to find their children and take them off the streets and out of danger.

U.S. Attorney General Loretta Lynch, who was sworn in to her position Monday morning, released a statement condemning the occurrences in Baltimore.

"Those who commit violent actions, ostensibly in protest of the death of Freddie Gray, do a disservice to his family, to his loved ones, and to legitimate peaceful protestors who are working to improve their community for all its residents," she said.