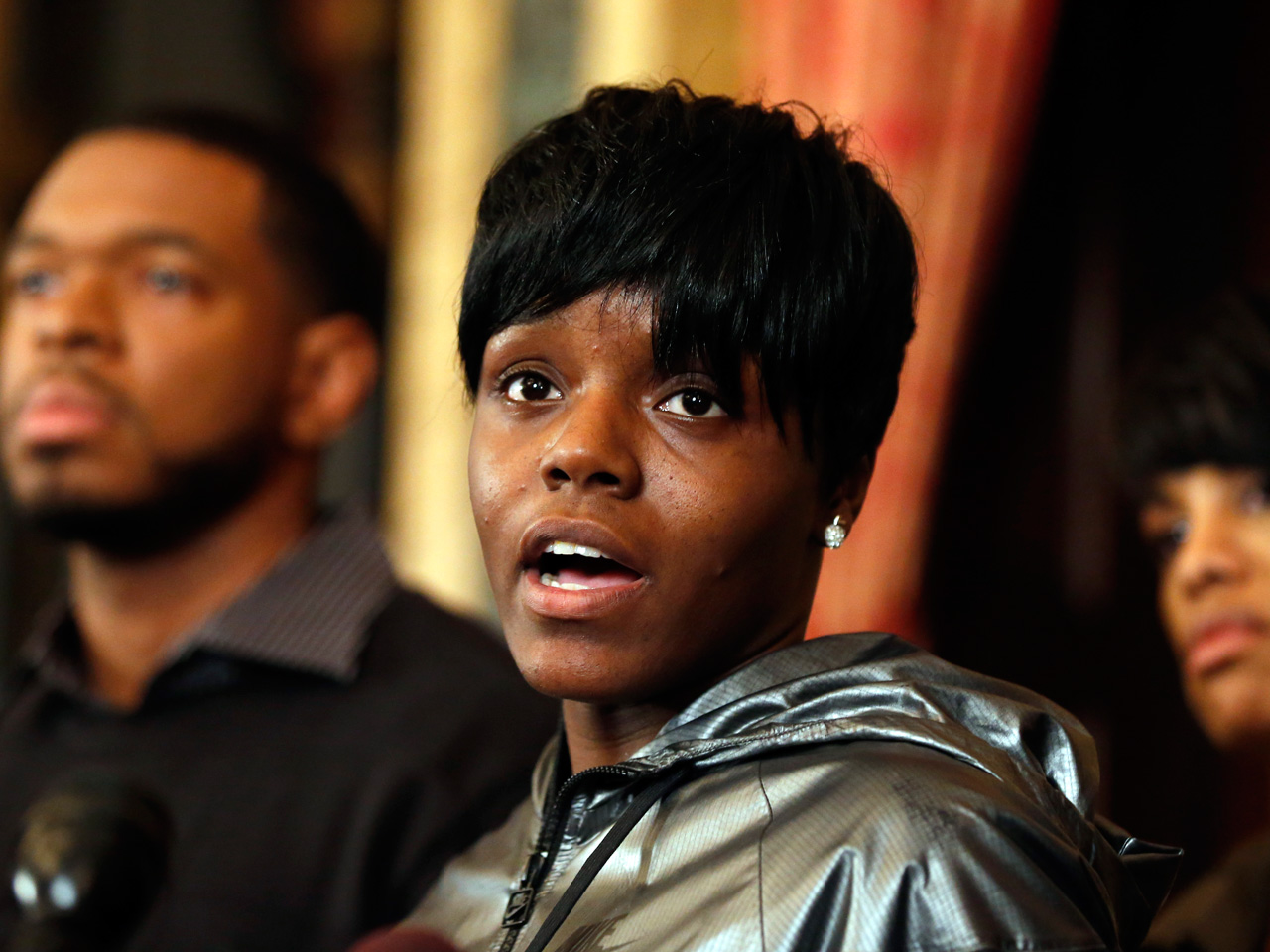 BALTIMORE - A protest over the death of Freddie Gray, who was critically injured in police custody, started peacefully with thousands marching through downtown streets before the demonstration turned violent and volatile.

The chaotic scene Saturday night prompted the first public remarks from Freddie Gray's twin sister, who pleaded for peace at a news conference alongside the mayor.

"My family wants to say, can you all please, please stop the violence?" Fredricka Gray said. "Freddie Gray would not want this."

Just before nightfall, groups of protesters marched from City Hall to the Camden Yards baseball stadium, where the Baltimore Orioles played the Boston Red Sox. Fans were told to briefly stay inside the stadium until the police were able to clear an intersection outside of the venue.

By the time the Orioles game ended, police were still in a standoff with protesters downtown, so the Orioles initially asked fans to stay in the Camden Yards after the game, but then finally opened the gates allowing fans to leave.

Meanwhile, a smaller "splinter group" looted a convenience store and threw tables and chairs through storefront windows, shattering the glass. One group smashed the window of a department store inside a downtown mall and, at one point, a protester tossed a flaming metal garbage can toward a line of police officers in riot gear as they tried to push back the crowd.

Earlier, a group of protesters smashed the windows of at least three police cars and got into fights with baseball fans outside a bar.

Police Commissioner Anthony Batts said roughly 1,200 officers were deployed downtown and across the city to try and keep the peace. At least six officers were injured and 34 people were arrested. Batts said he believes the "very violent agitators" are not from Baltimore.

"I'm proud of our residents," Batts said. "The majority of the people here did a great job."

But Mayor Stephanie Rawlings-Blake said she was "profoundly disappointed."

"Unfortunately a small group of agitators turned what was otherwise a peaceful demonstration into a violent protest. This is something that's unacceptable to me and everyone who lives in Baltimore," she said.

Fire officials said roughly 1,200 protesters gathered at City Hall Saturday afternoon to protest Gray's death, which has prompted near-daily demonstrations since his death on April 19. Gray was arrested one week before that when officers chased him through a West Baltimore neighborhood and dragged him into a police van.

Police acknowledged Friday that Gray, 25, should have received medical attention at the spot where he was arrested - before he was put inside a police transport van handcuffed and without a seat belt, a violation of the Police Department's policy.

Gray, who is black, was arrested after he made eye contact with officers and ran away, police said. Officers held him down, handcuffed him and loaded him into the van. While inside, he became irate and leg cuffs were put on him, police have said.

Gray asked for medical help several times, beginning before he was placed in the van. After a 30-minute ride that included three stops, paramedics were called.

Authorities have not explained how or when Gray's spine was injured.

On Saturday afternoon, protesters gathered at the site of Gray's arrest in the Sandtown neighborhood of West Baltimore before making their way to City Hall.

Leonard Patterson, 56, said he drove from Manassas, Virginia, to be a part of the protest. Patterson said he decided to come after thinking about his college-aged daughter.

"I'm trying to do everything in my limbs, everything in my power, to make this a better world for her," he said as he held a drawing of Gray being hoisted from a police van to heaven by two angels. "I'm here to do what I can. Police brutality is as old as the 1950s, 1960s. It's still here."

Wearing a sign around his neck that said "I am Freddie Gray," 33-year-old Dante Acree joined thousands of others outside City Hall. Acree said he came out to the protest because "it could have been one of my kids."

"It could have been my brother, my father," he said. "I'd want the same support."

One of the protest's organizers, Malik Shabazz, the president of Black Lawyers for Justice, said the crowd exceeded their expectations, adding that protesters' anger is not surprising.

"This is a problem that has not been solved," he said. "When there's no justice, they tend to want to take matters into their own hands."