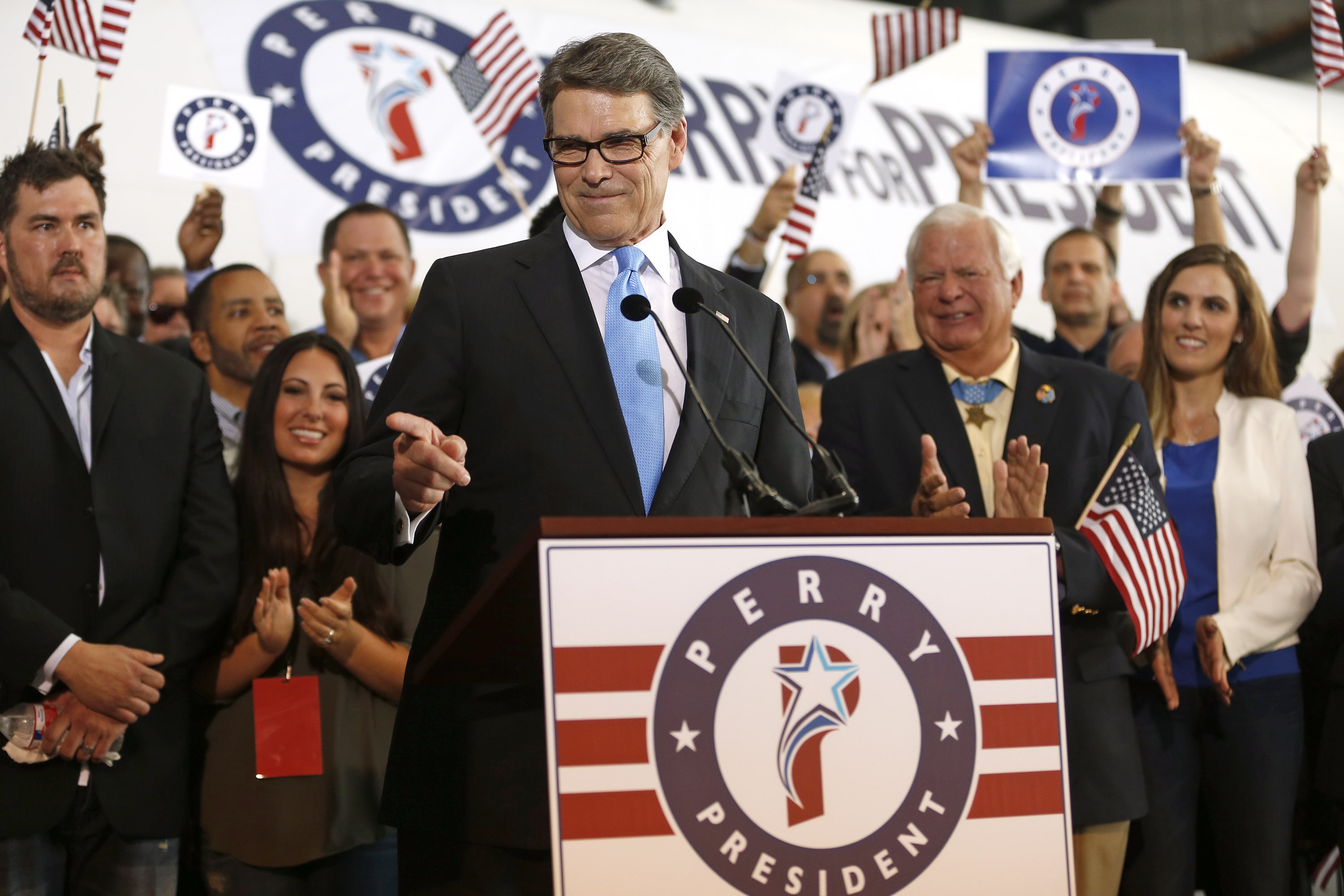 "Today I am running for the presidency of the United States of America," he told an enthusiastic crowd.

He criticized Obama policies at home and abroad, saying, "Our economic slowdown is not inevitable. It just happens to be the direct result of bad economic policy."

And Perry continued, "Weakness at home has led to weakness abroad. The world has descended into a chaos of this president's own making," where "Ramadi is merely a setback." He promised that his first act as president would be a foreign policy maneuver: he would "rescind any agreement with Iran" that allows them to obtain a nuclear weapon.

"No decision has caused more harm than the president's decision to withdraw troops from Iraq," Perry told the crowd, and he lamented that cities "once secured by American blood" are now being taken by America's enemies.

Still, he told his supporters, "We are a resilient country."

"We even made it through Jimmy Carter," Perry said. "We will make it through the Obama years."

At the Addison Airport, he stood in front of a C-130 plane marked with a campaign logo and the words "Perry for President" along its side. The aircraft is similar to planes he flew while he served as a captain in the U.S. Air Force.

To emphasize his ties to the military, Perry made his announcement flanked by several veterans, his wife Anita, American sniper Chris Kyle's widow, Taya Kyle, and former Navy SEAL Marcus Luttrell, author of the book "Lone Survivor." Perry took the stage to a modified version of Colt Ford's country anthem "Answer to No One," which featured a personalized rap with lyric substitutions like, "I'm a Rick Perry Supporter - let's protect our border!"

Perry, who is launching a second presidential bid after his failure to clinch the Republican nomination in 2012, is actively courting younger voters this time around.

Speaking directly to millennials, Perry said that "massive debt, passed on from our generation to yours, is a breaking of the social compact."

"You deserve better," the Texas Republican added. "I am going to offer a responsible plan to fix the entitlement system, and to stop this theft from your generation."

Perry also pointed to his economic record as the longest-serving Texas governor, saying he has "led the most successful state in America." He made the claim that Texas was "the engine of growth" because of a formula that would "control taxes and spending, implement smart regulations, invest in an educated workforce, and stop frivolous lawsuits."

He laid out a platform to reduce the United States' "highest corporate tax rate in the western world," to take back American jobs from overseas, and to lift wages for working families. He added that he would also roll back several "Obama-era policies" like the Affordable Care Act, Dodd-Frank regulations, and immigration reforms, while promising to grant approval of Keystone pipeline construction as soon as he enters office.

Prior to his official campaign kickoff speech, Perry took to Twitter and Snapchat to ask for support for "#Perry2016."

On the transient photo-sharing service Snapchat, he also posted the video to his followers.

Perry has been a fixture on the national stage for some time: he became governor of Texas when his predecessor, George W. Bush, was elected president in 2000, and he served for a record 14 years. Between 2010 and 2011, he also chaired the Republican Governor's Association.

He previously ran for president in 2012, was initially considered to be a strong contender for the nomination, but he eventually dropped out when his momentum waned. Perry's fourth term as governor ended earlier this year, and since then, he's maintained a busy travel schedule, speaking to conservative gatherings and voters in early primary and caucus states to keep his name in the mix.