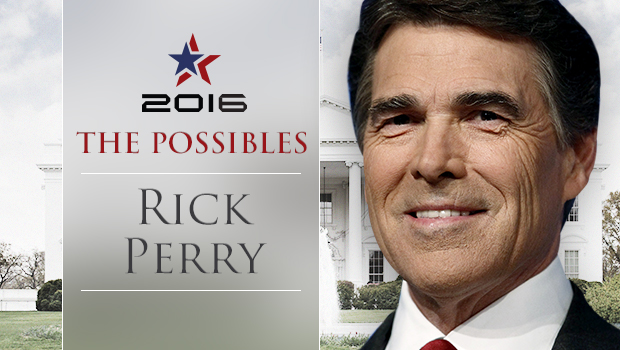 Texas Gov. Rick Perry had all the trappings of a formidable candidate, even a frontrunner, when he jumped into the 2012 Republican presidential primary.

He'd built a strong, conservative track record during 12 years as governor of the country's largest red state. Unlike some other conservative candidates who'd caught fire that year, he had a deep network of donors and close ties to the GOP establishment. And unlike Mitt Romney, the cycle's establishment favorite, Perry also had an easy rapport with the Republican base.

"I thought he was extremely well positioned to win that nomination," University of Texas Professor Daron Shaw told CBS News. "He just completely blew it."

Despite its early promise, Perry's 2012 bid unraveled in spectacular fashion, undone by some shaky performances on the stump and perhaps most memorably by a primary debate in which Perry muttered a plaintive "oops" after failing to recall the third of three cabinet departments he proposed shuttering.

It was an implosion as rapid and as humiliating as any in recent political history. Now, as Perry mulls another presidential bid in 2016, he must slay the ghost of 2012.

"He needs to show voters he's not the same person they saw three years ago," Texas-based Republican strategist Matt Mackowiak told CBS News. "That's one of the perceptions he's going to have to battle, but he understands that as much as anyone else."

Most of the post-mortems of Perry's 2012 bid blamed his collapse on a variety of structural and personal factors, from the timing of his launch to some health issues he was then facing.

"It was a perfect storm of issues that coincided at the wrong time," said Mackowiak. "He had this very serious and experimental back surgery about six weeks before he got into the race. There was pain because of that. He was on pain medication. He wasn't sleeping. He wasn't able to jog, which was very important to him."

Some suggested the governor's back problems threw him off his game, sapping his energy when he needed it most.

"I was really surprised at his performance on the stump in 2012," said Shaw. "The excuses about the painkillers and the physical problems - at first I completely dismissed those, but now I'm not sure. Everything I've seen since then tells me he's really good at this."

Others blamed the fact that Perry jumped into the race in August, well after it was already underway - a decision that forced him to spend his time raising money and gave him little margin for error on the stump.

"He hadn't done the preparation that a candidate would normally do because he got in late," Mackowiak said. "So the problems his campaign had - these debate problems, obviously the 'oops' problem...got a lot of negative attention."

Whatever the explanation, it's difficult to overstate the extent to which Perry's inauspicious 2012 performance looms over his 2016 ambitions.

"You're in a 12-way debate, you're going to have 5 minutes onstage, and you can't remember your talking points? That's just inexcusable," said Shaw. "Everybody thought Perry would be a really skilled campaigner, and he was just a flop...A lot of us are wondering about whether he has the chops to run a serious presidential campaign."

Despite his history, nobody is ready to count Perry out of the 2016 presidential race, because he simply he has too many assets to ignore.

Most obvious is the record Perry built during 14 years as governor of Texas. For much of Perry's tenure, the state topped or was close to the top job creator among the 50 states. He pushed an ambitious agenda, overseeing an overhaul of teacher tenure laws, tort reform, regulatory reform, higher education reform, tax reductions, and anti-abortion legislation. Some nods to moderation surprised observers - notably on immigration enforcement and mandatory vaccinations - but it was on the whole a decidedly right-leaning agenda.

"Texas did very well compared to the rest of the country during the recession," said Shaw. "Some other 2016 candidates...I don't think can quite match that record."

"Texas is really the model for conservatism in the country, and Perry deserves credit for that," said Mackowiak. "He was the strongest pro-life governor in the country, didn't raise taxes once, really focused on growing the economy. It's hard to find someone who has more executive experience - and a stronger record of success with that executive experience - than Perry."

Perry would bring to the race an undeniable skill at retail politics - and a level of early preparation that would allow him to showcase that strength.

"He's spent a lot of time in these early states already. If he gets in soon, he'll have another 8 or 10 months to do that. Retail campaigning is very important in the early states - they're not states that are won on television," said Mackowiak. "Perry is very down to earth, very likable, very genuine, so he's very good at those one on one interactions you're going to have thousand of times on the campaign trail. He's also able to fire up a crowd."

Perry can also count on relatively strong fundraising to bolster his viability. During his long career, he's built a number of relationships with GOP donors that have persevered to this day. In February, his team unveiled a list of more than 80 financial backers prepared to fund a 2016 bid.

"It's very encouraging and exciting that so many influential leaders in this country are signing on to assist the Governor spread his positive vision of conservative values around the country," Jeff Miller, Perry's chief political strategist, told the Washington Post.

Perhaps most critically, Perry may be able to pair this beachhead of establishment support with a following among the grassroots conservatives who dominate the early nominating process - a feat that may elude many of his competitors.

"Perry has the potential to unite both wings of the party," said Mackowiak. "He's a 14-year governor, former [Republican Governor's Association] chair. He's a known commodity to the party nationally, but he's also a very strong conservative."

If Perry runs again, he stands to benefit from what George W. Bush might call the "soft bigotry of low expectations."

"This time around, no one really expects him to be in the top tier, and he could be a sleeper candidate," GOP strategist John Feehery told CBS News.

"His strategy could be to lay low and let everyone else get their time in the spotlight," added Ron Bonjean, also a Republican strategist. "After each of them stumbles, he could strike when the iron is hot and show voters that he's a true leader."

To emerge from the scrum, strategists said, Perry will need to perform strongly in debates to quiet any lingering questions about whether he's ready for prime time. He'll also need to pick an early state to take a stand - and exceed expectations in that state's primary or caucus.

"He's not going to win, I don't think, but if he can score double digits in a place like Iowa, he might earn a second look," Shaw said.

"He has to win or perform very strongly in Iowa, and I think his record and experience line up very well there," added Mackowiak. The strategist noted that Perry is one of two military veterans in the GOP bullpen, and that he boasts a deep knowledge of agricultural issues - both traits that could be helpful in the Iowa caucuses.

In the end, Perry may raise a lot of money, he may turn in a rousing performance on the stump, he may exceed expectations in debates - and "it might not be enough," Shaw said.

"If you were re-running the race against the same set of candidates you had in 2012, Perry would have a better than even shot. But the quality of candidates this time is a quantum leap above what it was in 2012," said Shaw. "I don't know that he gets a chance."

"He stood out as a conservative governor leading a large state last cycle," said Bonjean. "He's now one of many."

The crowded field could have a real impact on the mechanics of Perry's bid. Despite his expected fundraising prowess, Perry won't be able to corner the market on GOP donors in Texas -- former Florida Gov. Jeb Bush's family ties to the state will see to that.

He may also find his thunder among the state's grassroots activists being stolen by Texas Sen. Ted Cruz, a tea party favorite who's actually outpacing Perry among Texas primary voters in early polling data. An Internet poll conducted last month by the University of Texas, for example, found Cruz ahead of Perry, 20 to 8 percent, among Texas GOP primary voters in 2016 -- and the poll was taken before Cruz formally announced his candidacy. Because the state's early 2016 primary could affect the trajectory of the election, that's not an insignificant consideration.

"I would call it the Texas bracket, and he's got to win it decisively," said Feehery.

"Cruz probably does have the higher profile and greater popularity in Texas," acknowledged Mackowiak.

Ultimately, the biggest hurdle Perry faces in 2016 is one he created for himself. They say you never get a second chance to make a first impression, and the first impression Perry made with his ignominious exit from the 2012 primary may ultimately prove too indelible for him to shake.

"He flamed out so spectacularly," said Feehery. "Sometimes you have a pitcher who's on the disabled list, and they come off the DL, and their arm just is not the same. That's the big question facing Perry: Can he still get the fastball going?"