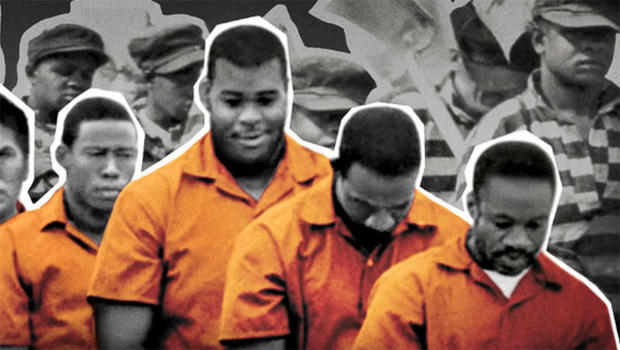 “Neither slavery nor involuntary servitude, except as a punishment for crime whereof the party shall have been duly convicted, shall exist within the United States, or any place subject to their jurisdiction.” -- 13th Amendment to the U.S. Constitution (1865)

One in four prisoners in the entire world are in the United States. The problem of mass incarceration, in which more than 2.3 million Americans (including a disproportionate number of black and Latino inmates) are jailed, their rights forever abrogated or tainted, is at the heart of Ava DuVernay’s sorrowful new documentary “13th” (Netflix), which has its world premiere tonight at the New York Film Festival.

It traces the problem to societal attitudes and laws, enacted after Reconstruction in the era of Jim Crow, which lead to the federal government’s War on Drugs and, later, the creation of privately-operated prisons as profit-making operations. It also faults politicians who use “law and order” as a dog-whistle approach to disadvantaging minority communities.

A key element of current law, the film suggests, is the clause in the 13th Amendment which banned slavery and involuntary servitude, but that specifically allowed for such in the case of “punishment for crime” -- hence, chain gangs and prison work forces.

But more insidious to today’s culture are stronger laws enacted since the 1970s against drug possession; mandatory minimums; abolishment of parole; and “three strikes” sentencing laws. Over the past few decades, prison populations have skyrocketed, flooding jails with lifetime offenders, often for non-violent drug-related crimes. The result, apart from families torn apart and communities ravaged of their young men, is a for-profit industry -- a “prison industrial complex” -- predicated on keeping all those newly-built jail cells filled.

The corporate group American Legislative Exchange Council (ALEC), which lobbies for -- and oftentimes writes -- state and federal laws, is also called to task for its role in “stand your ground” laws that make the use of deadly force permissible, as in the case of Trayvon Martin’s murderer, George Zimmerman.

They trace today’s inflammatory, race-based commentary to the rise of anti-black propaganda following the Civil War -- from D.W. Griffith’s “The Birth of a Nation” (which portrayed the Ku Klux Klan as heroes, and even originated the idea of burning crosses as a symbol of fear), to local newscasts incessantly showing young black men as threats to security, to race-baiting political ads, and to protests by and against the rising Black Lives Matter movement (born in response to police brutality against young black men documented by a proliferation of smartphone cameras and social media). And there is enough political blame to go around, from the Republican administrations of Richard Nixon and Ronald Reagan to the Democratic administration of Bill Clinton.

This year’s virulent political campaign is also put under the spotlight as a signifier of divisions in American life, magnified by TV news cameras capturing episodes of violence by one candidate’s supporters against another’s. Sadly, despite passage of the Civil Rights Act and the Voting Rights Act half a century ago, the distance between segregationists attacking civil rights marchers in the 1960s and attendees at a Trump rally punching protesters is not that great. That “more perfect union” is still a ways off.

A thought-provoking documentary which informs without resorting to grandstanding or unseemly proselytizing, “13th” makes its case with urgency, pain, empathy, and a closing sentiment of the joys still to be found in a wounded black community.

“13th,” screening tonight as the Opening Night program of the 54th New York Film Festival (the first documentary ever to do so), will be available to stream on Netflix beginning October 7. 100 mins.

To watch a trailer for “The 13th” click on the video player below.