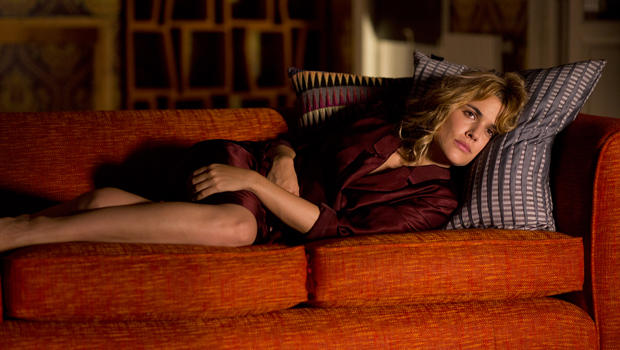 The women in Spanish director Pedro Almodóvar’s films have, on more than one occasion, been on the verge of a nervous breakdown. Melodrama is Almodóvar’s preferred prism through which to project his protagonists’ lives, in films that burst with sexual desire and crimes of passion, and he has continually succeeded at coaxing performances of unusual intensity and sly humor from his actors.

That tradition continues in his latest film, “Julieta” (screening today and tomorrow at the New York Film Festival), though the result is more subdued than usual. While the story betrays melodramatic roots, the filmmaker’s inclinations here are to present the narrative in a more restrained way (though still tipping its emotional core to that old Hollywood staple, the “women’s picture”).

When we are introduced to Julieta (played as an older woman by Emma Suárez), she has made up her mind to leave Madrid with her lover. But a chance meeting on the street with the best friend of her daughter, Antía, pulls Julieta up short. She promptly gives up her plans to leave Spain, dumps her lover, moves into a new apartment, and delves into the emotional turmoil of a past she had long buried, in which her daughter had disappeared without a trace.

At this point the film becomes an extended flashback, in which we see how the young Julieta (played by Adriana Ugarte) meets a fisherman, Xoan (Daniel Grao), with whom she shares a scorching night on a train. Going to live with him at his house on the coast, they subsequently raise their daughter together in a life that appears placid. But rumblings of discontent and infidelity threaten to upend their relationship and destroy their family bond.

After the teenage Antía abandons her, Julieta fills her life with her daughter’s absence -- annually purchasing birthday cakes, only to end up dumping them in the trash -- until she makes the decision to erase all traces of her past life.

And that sort of purge never goes well.

The origins of “Julieta” lay in Canadian writer Alice Munro’s book of short stories, “Runaway,” which Almodóvar had once planned to adapt as his first English-language production, to be set in America. But as the film’s themes evolved, he determined that Spain was a better setting for his story of betrayal and guilt, and of a protagonist who is herself a mystery.

Almodóvar’s cinematic passions are fully on display: There are thriller elements that recall Hitchcock and family drama reminiscent of Douglas Sirk. And while most of his cast is new to him, he does bring back a couple of his stable of actors to help mark the director’s pedigree: Rossy de Palma as a Mrs. Danvers-like housekeeper, and Darío Grandinetti as Julieta’s lover.

The two actresses playing Julieta movingly illuminate the hidden life of a woman with secrets -- both Ugarte as the impetuous young girl who opens a door into trouble, and Suárez as the more mature version who believes that door can be closed and stay closed. They learn that control over their circumstances is elusive, that guilt over a man’s death can be soul-killing, and (because this is an Almodóvar film) that people can abandon those they love, but will never forget them.

“Julieta,” a Sony Pictures Classics release, will be screened at the New York Film Festival on October 7 and 8, before opening in New York City and Los Angeles on December 21. Rated R, for Almodóvar. In Spanish with English subtitles. 99 mins.