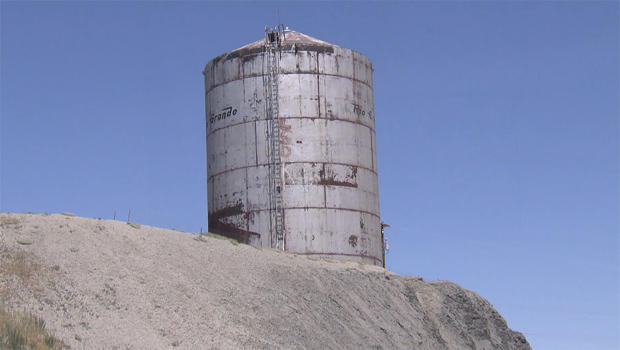 Barry Petersen has a singular story about a one-of-a-kind destination that has to be HEARD to be believed:

The Christmas music is age-old, sung by the people of the small Colorado town of Rangely. But it has never been heard this way before.

It is music made inside a massive, old water tank, like thousands that dot the American West. But there is only one like this.

It has acoustics that are as complicated as a Gothic cathedral’s, where a single sound can reverberate for up to a minute.

“It’s a combination of accidents from an early industrial age of America that makes this sound,” said Bruce Odland. He was touring western Colorado with a group of artists in the 1970s. His art was a little unusual -- traveling the state with tape recorders to collect sounds.

“And a muddy four-wheeler pulls up with two roughnecks in it,” Odland recalled. “And they say, ‘Hey, are you that guy?’ And what am I gonna say? I got microphones all over me. I’m obviously that guy! ‘Get in. We got something to show you.’”

When they took him to the tank, it was love at first sound.

The Tank started its life storing water for steam engines roaring across the West. When steam died, the tank was moved to Rangely, a one-stoplight western Colorado town of a couple thousand, where it was mistakenly placed on a bed of gravel. Its weight warped the steel floor upwards, making it unsafe for storing pretty much anything.

Petersen asked, “And how does that affect the sound, do you think?”

Its fame grew among artists across the country. But people in this town of ranchers and hard-scrabble oil workers were dubious. They found it pretty hard to see any reason to support saving a derelict tower of steel whose value seemed to be mostly for scrap.

How did Odland get two cultures to agree? “Well, it’s been a gradual process, you know?” he replied. “I mean, at first we were just, like, extraterrestrials who had to be watched.”

A skeptical Elaine Urie, then on the city council, agreed to visit the tank and give it a chance. Petersen asked her, “When somebody first talked about the quality of the tank, didn’t you think they were just a little bit crazy?”

But hearing was believing.

“It’s like the sound goes into your soul, and it does something to you!” she laughed.

And what does it do to her?

Other townspeople are now supporters, and helped in the Internet crowdfunding that has raised $150,000 to buy and maintain the Tank, hoping to make it a center for artists and musicians from around the world.

Elaine Urie comes from just across town, and to understand why she believed this old tank needed saving, we asked her to sing from deep within her religious faith:

“Amazing Grace,
How sweet the sound,
That saved a wretch like me.
I once was lost,
But now I’m found,
Was blind but now I see”