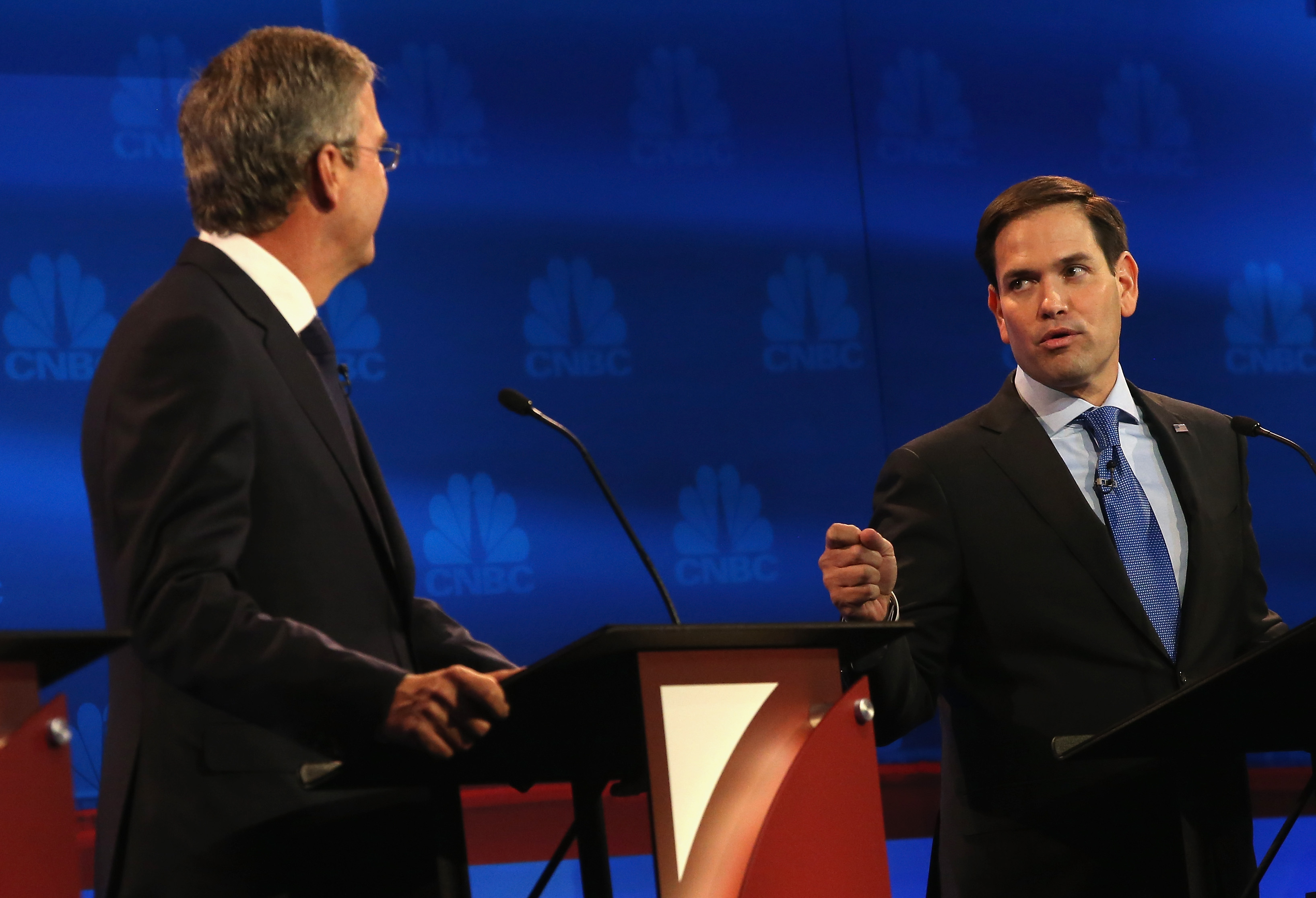 In a crowded field of Republican candidates anxious to take down frontrunners Donald Trump and Ben Carson, diverging strategies are emerging: There are those ready to throw some elbows on the GOP debate stage, and those who prefer to focus their attacks on Democrats.

Ohio Gov. John Kasich and Florida Sen. Marco Rubio used opposing strategies in Wednesday night's debate, hosted by CNBC in Boulder, Colorado, but both managed to stand out among the 10 candidates on stage.

"We are on the verge of picking someone who cannot do this job," Kasich said at the very outset of the debate, clearly alluding to the two front runners. He slammed their "fantasy" policy proposals and "empty promises" while touting his own record in Congress and in the governor's office of Ohio.

Former Florida Gov. Jeb Bush was similarly aggressive, but his attacks were less effective. In fact, one attempt to criticize Rubio's voting record in the Senate boomeranged on Bush, who inadvertently handed Rubio a standout moment.

After debate moderators questioned the number of votes Rubio has missed in the Senate, Bush chimed in as a "constituent" of the senator.

"I expected that he would do constituent service, which means that he shows up to work," Bush said. "Marco, when you signed up for this, this was a six-year term, and you should be showing up to work. I mean literally the Senate, what is it, like a French work week? You get like three days where you have to show up. You can campaign or just resign and let someone else take the job."

Rubio defended his record and also used the moment to cast Bush's remarks as calculated and somewhat desperate.

"We're running for the same position, and someone's convinced you that attacking me is going to help you," Rubio said. Here's the bottom line. My campaign is going to be about the future of America. It's not going to be about attacking anyone else on this stage. I will continue to have tremendous admiration and respect for Governor Bush. I'm not running against Governor Bush. I'm not running against anyone on this stage. I'm running for president because I think there's no way we can elect Hillary Clinton to continue the policies of Barack Obama."

Rubio's response to Bush won him a healthy round of applause from the Boulder audience.

Following the debate, Trump reveled in the fact that he wasn't the central focus of discussion, as he has been in prior debates.

"I actually think everybody did well, and I thought there was a great camaraderie with the different players. You saw it," he said on CNN. "I mean, there was some little skirmishes with, as an example, Marco and Jeb... I've been saying they can't love each other that much."

While Trump has recently started attacking Carson, who has surpassed him in polls, he mostly held his fire in Wednesday's debate. His most vigorous attack was against Kasich, in direct response to criticism from the Ohio governor.

Trump slammed Kasich for his time as a managing director at failed Wall Street firm Lehman Brothers, and he chalked up Kasich's successful economic record in Ohio to luck. He also lamented that Kasich was once "such a nice guy...but then his poll numbers tanked. That's why he's on the end, and he got nasty, and he got nasty."

Carson was also relatively quiet. He promised to adhere to "Reagan's 11th commandment" and refrain from saying "awful things about my compatriots here."

Sen. Ted Cruz of Texas, who is notoriously combative with his GOP colleagues in Congress, also played nice in Wednesday's debate. Instead of criticizing his primary opponents, he aimed his fire at Democrats and the media.

"The questions that have been asked so far in this debate illustrate why the American public don't trust the media," Cruz said. "This is not a cage match...How about the substantive issues people care about?"

When the CNBC moderators tried to get Huckabee to critique Trump's "moral authority," he resisted. "I love Donald Trump. He is a good man. I'm wearing a Trump tie tonight," he said to applause.

Huckabee added, "Donald Trump would be a better president every day of the week -- and twice on Sunday -- than Hillary."

Fiorina, for her part, declared at the end of the debate, "I am Hillary Clinton's worst nightmare."