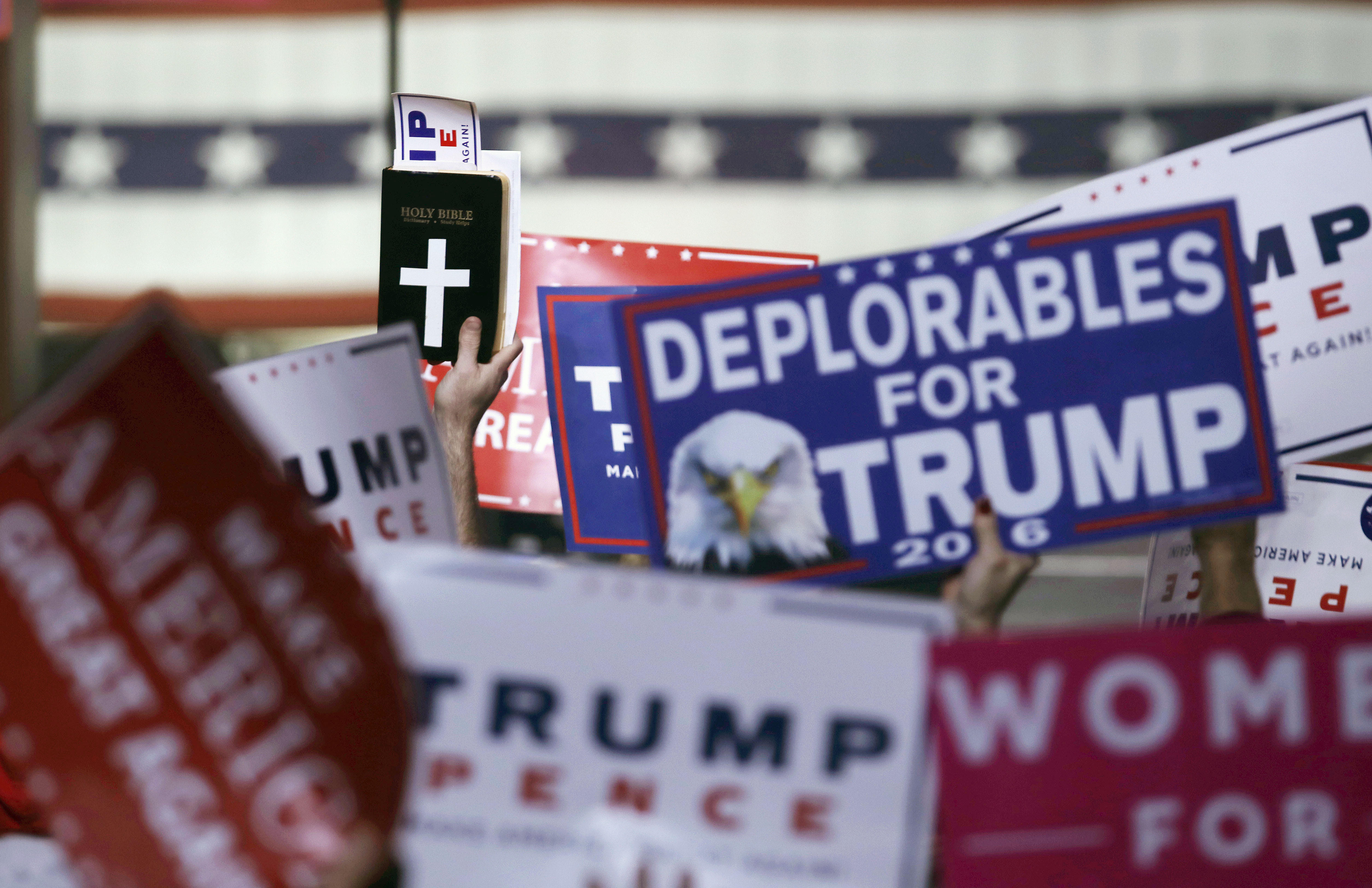 I would love to join the chorus and say my jaw dropped when it was becoming apparent that Donald Trump was going to win on Election Night.

But the truth is that I still haven’t picked it up from when Trump gave out Sen. Lindsey Graham’s phone number in South Carolina (July 21st, 2015).

Or when he went on a long screed against Ben Carson, which culminated in him inviting an audience member to stab him and then asking how “stupid” the voters of Iowa are (November 21st, 2015).

Or when he repeated an audience member calling Sen. Ted Cruz a “p**sy” in New Hampshire in front of thousands (February 8th, 2016).

My mouth is still (hopefully not permanently) agape from when Trump called a statement by Pope Francis “disgraceful” in South Carolina (February 18th, 2016). In that instance, I actually let out a gasp. It wasn’t the first time. It certainly wasn’t the last.

For visual evidence of my shocked face, see Trump’s Facebook Live video on October 9th before the second general election debate. Trump shocked the nation when he held a news conference with Bill Clinton’s accusers of alleged sexual misconduct through the decades.

As reporters filed in, there was my face, once the realization dawned on me as to what was happening, with eyes popping as if we had reached the peak action scene of Looney Tunes episode featuring Daffy Duck.

I have this journal I’ve kept since the beginning of the campaign. The first entry was before Trump announced. It has my weight. It was the first time I had weighed myself in awhile and I aimed to stay in shape on the trail. While I won’t give you the specific number, I will say that following the number, my journal entry says “Yikes!”

Let’s leave aside whether a year and half of being on the road with only sporadic trips to the gym and never turning down that bag of chips helps with that. The first Trump-related entry was on July 16th, 2015. Trump gave a speech in Laconia, New Hampshire.

The entry reads, “Sweltering hot…room packed to the brim...”

Then there was Trump, unfiltered and with no teleprompter aiming a Trump-Tower sized verbal cannon at…everything.

“And that’s the problem with politicians,” he said, voice rising. He controlled the room with an almost preacher-like quality. “That’s all they do is debate. They go up. They debate. They’re all talk. They’re no action. Nothing happens ever! Nothing happens!”

“We have a president that doesn’t have a clue!”

Trump walked off stage. My journal reads, “Trump mobbed on way out of the room...as if he was Paul McCartney from the Beatles in the 1960’s. Maybe he is for GOP.”

When Trump said the “silent majority” is back, many scoffed. I think back to that Laconia rally and I wonder if Trump truly knew about what the fervency of his support – or what the media spectacle would be for the entirety of the campaign. I certainly didn’t.

The funny thing is that for the last 18 months, as the campaign reporter assigned to cover Trump for CBS, I have spent more time in the same room as Trump other than his own staff and family. But in that time, I never got to know the guy.

I never found out what made him tick. I never had a full conversation with him, beyond press conferences or the occasional hello. He never hung out with his traveling press. The only time he would even acknowledge reporters was to call us dishonest at every turn at rallies and to turn crowds against us. One personal interaction I did have with him did give me some insight into who Trump was as a person. I just didn’t realize it at the time.

A couple weeks after Laconia, during a hot summer morning, a mass of cameras, journalists and bemused pedestrians crowded outside 60 Centre Street - New York’s State Supreme Court. The court officer that’s patrolled the court for almost forty years said he had never seen anything like this. I was there for CBS.

A woman walked by a group of us -- when we were already irritated and drowning in sweat -- and said, “Don’t you have anything better to do?” I wish I could time-warp back to that woman and say, “Lady, you have no idea.”

A photographer snapped back: “You stop watching this stuff, we’ll stop taking pictures.”

Any second now, Trump was about to show up for jury duty. A woman walking out of the courtroom shook her head and muttered, “This isn’t news. This is b******t.”

Trump was supposed to show up at 9:00 a.m., but pulled up in a stretch limo about seven minutes late. His long-time driver, Eddie Diaz, said that the car ran into some traffic on the way down. The limo pulled up to the court and out popped the future president-elect. Trump was instantly mobbed by cameras and reporters shouted questions at him.

“Will you deport 11 million undocumented immigrants?”

“Are you excited for jury duty?”

Trump slowly and deliberately walked up the courthouse steps. He soaked in the media attention - occasionally throwing glib, one-sentence responses to ravenous reporters ready to gobble up any and all sound bites. I was stationed near the courthouse door. I was part of the pack - yelling questions. Trump, ever the showman, knew we needed to get our shots. He would stop occasionally to make sure.

Trying to get the coolest kid in the area to pay attention was something I had done my whole life without success. As Trump got near my camera, he closed his eyes and flashed a thumbs up to my lens. Two men who wanted to get Trump to sign a dollar bill. They told me it could sell for $200 on Ebay.

Trump came out and took a lunch break, still being mobbed by cameras on the way in and out. On his way back in, I asked him how he would feel about getting picked for a jury. He paused, weighing whether to grace me with a precious sound bite. He turned to me and said, “If it happens, it happens.”

“If it happens, it happens,” was, in one way, the most banal phrase ever invented by man. It is a close relative of “It is what it is” and “Both teams played hard, man.” But on the other hand, it sums of the Trump candidacy in five words. Trump campaigned his way, consequences be damned.

There was never a pivot to appeal to the masses. But he didn’t care.  It was the Trump mindset. He could go to war with Fox News. He could insult veterans who were prisoners of war. He could propose a giant wall across the Southern border that would cost hundreds of billions of dollars - and then claim Mexican government would pay for it - and still be impervious to political gravity.

Hundreds of rallies later, I find myself thinking back to that Laconia rally and jury duty as very indicative of what the Trump candidacy would be like: The preacher-like bombast, and the swagger of his walk up the steps.

And it worked. Now, there is no “If it happens, it happens.” It happened. Trump is now the president-elect.

“He’s the only one I’d even consider,” 69-year-old Kit Carson, a lifelong Newport Beach resident once told me at a rally at the USS Iowa in Los Angeles, California more than a year ago. “Our politicians are coercive crooks who live off of you and me.”

“Might as well not even be anybody else,” said Bradley Herring, a 26-year-old firefighter I met at a rally in Franklin, Tennessee. He drove almost 10 hours to come see Trump. “Not a politician, he’s a businessman. He’s rich. If he can build a billionaire empire, he can build a rich country.”

I met many people on the trail that agreed with Carson and Herring, the ones that thought Trump would change everything because he wasn’t a politician.

“It’s like reading a book. How many times do you have to read Gone With The Wind before you know what happens?” said 68-year-old Jane Williams at a rally in Richmond, Virginia. “You hear what they have to say. Canned, heard it before.”

In some respects, Trump had the election won just by announcing he was running, by sheer virtue of not being anybody else.

But there was also a genuine, visceral dislike of Hillary Clinton. One interaction that always stands out to me was with a man named Sandy Woodmansee, a construction supervisor, who lives in Epping, New Hampshire.

He was volunteering for Trump at a rally in Keene in September, 2015. Woodmansee had a grizzled, white beard with a thick New England accent. He was sporting a buzz cut, a grey polo and shorts. He was a fast talker and his job was to patrol the parking lot.

“STOP. YER NAWT ALLOWED TO BE IN HE-UH,” he would say to drivers who had gone astray. No one needs a moat when you had Woodmansee.

I asked Woodmansee why he had decided to volunteer for Trump.

“I was laying in bed, trying to sleep, and I don’t know why, but I thought of the Clintons being back in the White House and it absolutely appalled. The very next day I volunteered to assist Donald Trump.”

Months later, Trump would have his first victory in New Hampshire, crushing the competition. Woodmansee spotted me across the room, walked up to me, grabbed me by the face and plopped a big kiss on my cheek. He then walked away without saying a word.

There went my jaw again.

Trump rallies were like political Woodstock for his supporters. People would drive for hours, stay overnight in front of an arena to get a good seat, dress up in costume and cry during their favorite Trump policy proposal. One time, at a rally in Las Vegas, I watched a man literally bow down to Trump when he was on stage.

At that same speech, Lisa Mains, a Dutch immigrant who came to the United States in 1966, said to me, “The reason I’m here? Support the only hope for America. As far as I’m concerned, he’s God’s gift to this country right now.”

I would be remiss if I didn’t mention the difficulty of covering Trump as one of the few minority reporters on the road full time covering him. Oftentimes, I found myself as one of the only people of color in the sea of thousands at Trump rallies. One time, at a speech in Reno, I was asked if I was a member of ISIS.

However, I was then subsequently disheartened when I told a Trump staffer what happened, and the staffer said that my situation was analogous to Trump being called a Nazi by the press. It wasn’t.

No matter what the future brings, covering Trump from the start to finish of his campaign will be unlike any other experience I will ever have. His supporters showed similar dedication to their candidate that long-suffering Cubs fans have for decades before their team finally won.

I once asked 52-year-old Kurt Schnable, from Marengo, Illinois, if Trump could ever lose his support. Schnable drove more than 200 miles to Burlington, Iowa to hear Trump speak.

“That would be very difficult,” Schnable said. “Bought the cap last week.”