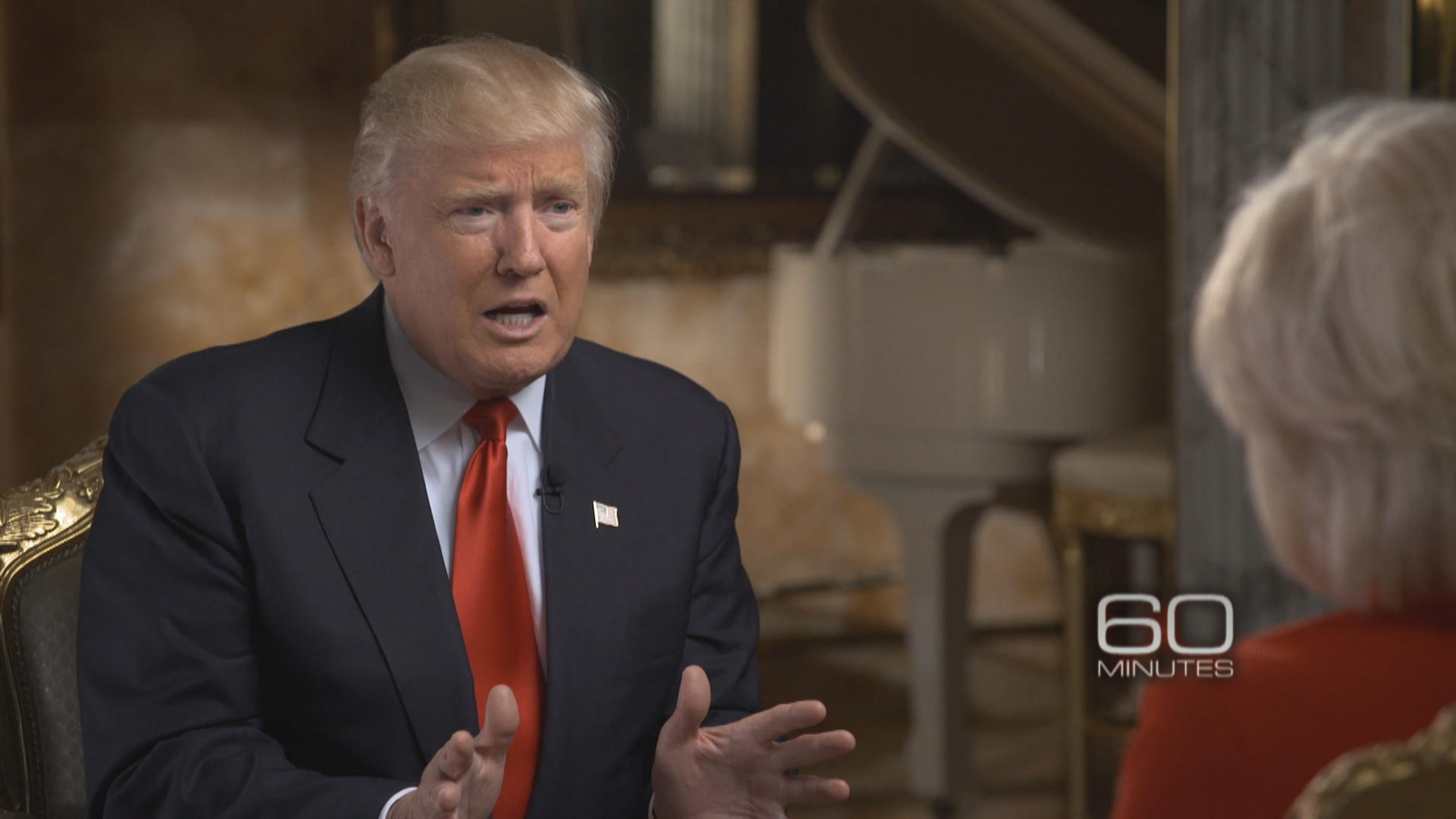 During his first television interview as president-elect, Donald Trump sat down with “60 Minutes’” Lesley Stahl and revealed more of his thinking on several important topics.

From new details on his plan to build a wall along the U.S.-Mexico border to addressing concerns about his stance on same-sex marriage, the future president shed light on what he plans to do about some of the promises he made during the campaign.

Stahl said she noticed “quite a change” in the president-elect compared to an interview she held with him earlier this year, when he was still just a candidate.

“He was much more subdued, much more serious” this time around, Stahl said.

“I really did have the feeling that the sense of gravity, and how big the problems are — it was sinking in, washing over him,” she says. “I think he wanted the public to know that he understood that he had to shift gears and pay attention to the responsibilities now.”

Here are 7 things we learned from Trump during his interview with “60 Minutes”:

1. He’s thinking about how the Supreme Court could change abortion laws

One of the first things on President-elect Trump’s agenda is to replace the late Supreme Court Justice Antonin Scalia with a conservative judge.

On Sunday’s “60 Minutes,” Stahl asked Trump if that meant he was looking to appoint a justice who wants to overturn Roe v. Wade.

“Yeah, but then some women won’t be able to get an abortion?” Stahl asked.

“No, it’ll go back to the states,” Trump replied.

And if some states ban it?

“Yeah, well, they’ll perhaps have to go — they’ll have to go to another state,” Trump said.

2. The wall on the Mexican border could have “some fencing”

One of Trump’s signature pledges throughout his campaign has been to build a border wall between Mexico and the United States. In fact, he’s been promising it since Day 1.

“I will build a great, great wall on our southern border, and I will make Mexico pay for that wall. Mark my words,” said Trump when he first announced his candidacy in June 2015.

So, will Trump follow through with his grand plan?

“They’re talking about a fence in the Republican Congress. Would you accept a fence?” Stahl asked.

The LGBTQ community has no reason to fear a Trump presidency, the president-elect assured Stahl, and the American people, on Sunday’s “60 Minutes.”

The billionaire businessman says he’s always been a “supporter.”

Stahl brought up a specific issue of concern for many people in the LGBTQ community: marriage equality.

“It — it’s irrelevant because it was already settled. It’s law. It was settled in the Supreme Court. I mean it’s done,” Trump said.

“So even if you appoint a judge that — ” Stahl prodded.

“It’s done. It — you have — these cases have gone to the Supreme Court,” Trump said. “They’ve been settled. And, I’m fine with that.”

4. Trump’s not sure if he’ll appoint a special prosecutor to investigate Hillary Clinton over emails

Trump supporters roared with cheers as he threatened to appoint a special prosecutor to investigate Hillary Clinton and her private email server during the second presidential debate in October.

“If I win, I’m going to instruct the attorney general to get a special prosecutor to look into your situation because there’s never been so many lies, so much deception,” Trump said.

“It’s just awfully good that someone with the temperament of Donald Trump is not in charge of the law of our country,” Clinton snapped back.

“Because you’d be in jail,” Trump said.

But days after being elected the 45th president, Trump’s tone appears to have changed. When Stahl asked Trump on “60 Minutes” whether he’d follow through on that particular threat, the president-elect was undecided.

“You called her ‘Crooked Hillary,’ said you wanted to get in jail, your people in your audiences kept saying, ‘Lock em’ up,’” Stahl reminded Trump.

5. Obamacare will be repealed and replaced “simultaneously”

Health care is a “tough situation,” admitted Trump while discussing his plan to repeal and replace Obamacare with Stahl on Sunday.

The president-elect says even though he wants to get rid of Obamacare, he will make sure people with pre-existing conditions are still covered. And he says he’ll “try” to keep coverage for “children living with their parents for an extended period.” (They can currently stay on their parents’ plan till age 26.)

“Adds cost, but it’s very much something we’re going to try and keep,” Trump said.

The president-elect told Stahl that there won’t ever be a period during the restructuring where millions of people could lose coverage.

6. He directly addressed his supporters after some reports of violence

Donald Trump said he’s “saddened” to hear about acts of violence carried out in his name either by his supporters or targeting his supporters.

On “60 Minutes,” days after the election, Trump directly addressed those who would resort to violence, telling them, “Stop it.”

He told Stahl that he hadn’t heard about reports of racial slurs or personal threats by his supporters targeting African-Americans, Latinos and gays. But he promised that he’s going to bring the country together.

7. He’s going to refuse to take the presidential salary or big vacations

After Trump’s victory last week, questions began to circulate about what would happen to his business empire and income when the business mogul becomes president.

On Sunday, Trump told “60 Minutes” that he wouldn’t take a salary as president.

“No, I’m not gonna take the salary. I’m not taking it,” Trump said.

Trump also said he doesn’t expect to be “very big on vacations” as president either.

From the very beginning, Trump has promised that he’d set businesses concerns aside if he was elected, although his children would continue to run his company. He promised last year that he would refuse to take a salary as president, too.

“The first thing I’m going to do is tell you that if I’m elected president, I’m accepting no salary, OK?” Trump said at a rally in Rochester, New Hampshire, in October. “That’s not a big deal for me.”