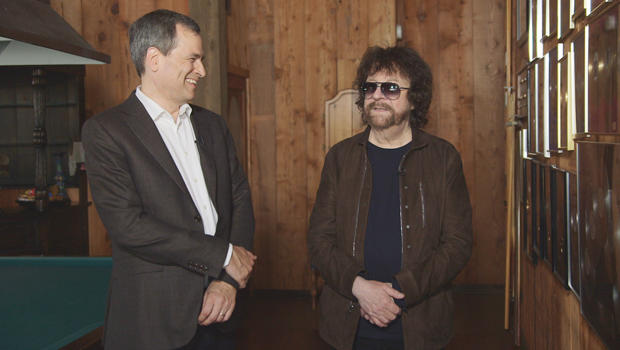 I'm not gonna lie: Being a "CBS Sunday Morning" correspondent has its privileges. Like getting to meet your musical idol.

As a teenager, I was obsessed with the British band ELO, the Electric Light Orchestra. I was a budding composer myself, and the stuff ELO did with harmonies, chord sequences, and string arrangements blew my mind.

ELO disbanded in 1986. Its songwriter/lead singer/producer, Jeff Lynne, moved on to other, off-stage projects, like writing and producing songs for George Harrison, Tom Petty, Roy Orbison, Brian Wilson, and even the surviving Beatles. ELO fans thought, "Well, that's it. No more ELO."

So, when I learned last year that ELO was touring again for the first time since 1981, I thought: "Now this would make a great 'Sunday Morning' profile. And I know just the correspondent for the job!"

The tour isn't the only part of the band's resurgence, either; there's a new album form Jeff Lynne's ELO, "From Out of Nowhere," released on Nov. 1; there's Lynne's 2015 Hollywood Walk of Fame dedication; and his 2017 induction into the Rock 'n' Roll Hall of Fame.

His music, meanwhile, has seen a resurgence in popular culture. His biggest hit, "Mr. Blue Sky," starred in the opening scene of "Guardians of the Galaxy II":

It's also been featured in "Megamind," "Paul Blart: Mall Cop," "Eternal Sunshine of the Spotless Mind," half a dozen TV series, TV ads, and the 2012 Summer Olympics.

TV is a fantastic medium for stories with a lot of visuals and music, but network time is limited. So here, for the benefit of ELO fans, is a kind of reporter's notebook: a little more about our Jeff Lynne profile, behind the scenes.

My Lyft pulled up to a big, wooden house, way up in the hills of Los Angeles. As I approached the front door, I took a deep breath: After admiring him for 40 years, I was about to meet Jeff Lynne, and there's nothing worse than finding out that one of your idols is an abrasive jerk.

Lynne, 71, turns out to be the complete opposite of abrasive. For a man who's been called a genius over and over again, he's astonishingly shy and self-effacing.

Consider: His photo rarely appears on his album covers. He's worn sunglasses in public for almost his entire professional life, no matter the lighting. He's said often that he'd much rather labor for hours in his studio than take the stage. And when, before we started shooting, I told him how much his music had influenced me as a young man, he seemed almost sheepishly grateful.

"I went to your Madison Square Garden concert with my family," I told him. "And the place was packed. And people were screaming and singing along and dancing."

He kept cracking us up like that throughout the interview. At one point, he totally got me:

POGUE: "Do you ever take the sunglasses off?"

POGUE: "Really? Is it a signature look? Or is it because the light bothers you, or …?"

LYNNE: "I just like myself better with them on. I'm less shy with 'em on, probably."

POGUE: "That's funny, for a rock star. You wouldn't expect that."

LYNNE: "I'm from Birmingham, England. The nearest seaside was 85 miles away or something!"

For many years, Jeff Lynne assumed that his ELO years were over. He immersed himself in producing, and returned to performing only briefly, in 1988, when he joined George Harrison, Bob Dylan, Tom Petty and Roy Orbison to form The Traveling Wilburys. They did not, in fact, travel, or even perform in concert, but they did record two albums, and promptly won a Grammy.

Then, in 2014, the organizers of a Children in Need charity concert asked if ELO would perform one song to close the show.

But the newly-constructed band (called Jeff Lynne's ELO) had no other songs to play. "Nothing at all, 'cause we hadn't been together but a few days." So, they played "Mr. Blue Sky" again.

"We played that twice, which was kind of embarrassing. But it made me realize that actually, I could do this again."

And he did – later that year, at Hyde Park with the BBC Concert Orchestra. Once again, Jeff Lynne's ELO was to be the last act of the festival, and he was nervous.

"What I was worried about was that there wouldn't be anybody left," he said. "I kept goin', 'Well, what if they've all gone home?' But it was packed, all the way through the park. I think it was 50,000. And that was the first big gig back, you know?"

In our interview, Lynne confirmed that he doesn't read or write music. "But you are known for these incredible arrangements – the choirs, the string orchestra – I mean, some complex chords," I said. "So, how do you write the songs without writing the notes?"

"Well, you just play the chords, and you go, 'Oh, that's a nice one.' And then I'll just lay it down onto my iPhone," he said. "What I am is a chord hound, I suppose. I just love chords, and I love chord changes, and the way they can send all your hair standing on end on the back of your neck, if it's a great chord change. And then all we gotta do is think of a song and another five minutes of music."

I pointed out that his greatest songs aren't just famous for chord changes, but also section changes. At the end of "Mr. Blue Sky," for example, there's a 1.5-minute pure orchestral section, in a different key and tempo from the main song:

Or, in "Turn to Stone," the song interrupts itself for a rapid-fire triplet section:

Or there's the Spanish violin solo that breaks up the middle of "Livin' Thing":

Lynne says that he puts those sections in from "the fear of getting boring."

"We used to call 'em 'whizzits.' Like, 'Oh, I need a whizzit in here, to take your mind off this tune that's been goin' on for a day.' Just something that just turns left all of a sudden, you know what I mean, mate?"

According to Lynne, his rock-musician ambitions go back a long, long way.

Soon thereafter, he was at a buddy's house, poking around his cabinets, and found a plastic Elvis Presley guitar in the cupboard with one string.

"I borrowed it," Lynne said. "And on that one string, I learned every song in the charts, on one finger and one string.

"Oh wow," I said. "Imagine what you could do with five more! I think you're limiting yourself!"

The idea for ELO, from the beginning, was rock band + string section. I asked Lynne where that idea came from. "My dad was a mad, classical person," he said. "He knew all these highfalutin classical numbers, and he knew what key they were in, and who was playing the lead fiddle and all that. And I wondered how he knew. Because my dad was, like, a laborer! He used to lay the pavement stones on the paths of Birmingham streets."

As a result, Lynne grew up surrounded by that improbable classical influence. "The whole weekend, it was just classical. So, I used to get it rammed down my throat, basically."

The irony was, of course, that neither Lynne's mother nor father thought much of his own music. "The only time he said, like, a compliment, was, he said, 'Blimey, you wrote that for me, didn't ya?' 'Cause it was on an album called 'Eldorado,' and it had all these strings going, and a lot of interludes of classical style.' And I said, 'Yeah, I suppose so.' I suppose I was just trying to prove I knew just a little bit of something."

On his last two albums, Lynne has played almost all the instruments himself. He recorded them entirely in the studio, one instrument at a time. He is, by his own admission, something of a perfectionist.

In fact, in 2012, he went back and re-recorded 12 of the most famous ELO songs, just for the sake of polishing things that had always bugged him about the recordings.  "Used to drive me mad when on the radio. I'd go, 'Oh, I hate that bit,'" he said. "Just things that were out of balance or out of tune maybe slightly."

I'm no psychologist, but after experiencing Lynne's humility, his deadpan humor, and his intense shyness, I think it's safe to say he's an introvert. Which isn't something you might expect in a pop musician.

"Are you a reluctant rock star?" I asked him.

"I suppose so," he said. "You know, going out and being flashy and dancing around and all that stuff? I don't do any of that. I just love music so much that it's just a pleasure to be doing it, you know? Especially if you got a nice tune on the go. And that makes you cheerful, you know, to think, 'Oh, I've got that to work on tonight.'

"I've heard you say that you could just spend 14 hours a day in the studio and you'd be totally happy," I said.

You can stream the Jeff Lynne's ELO album "From Out of Nowhere" by clicking on the embed below (Free Spotify registration required to hear the tracks in full):