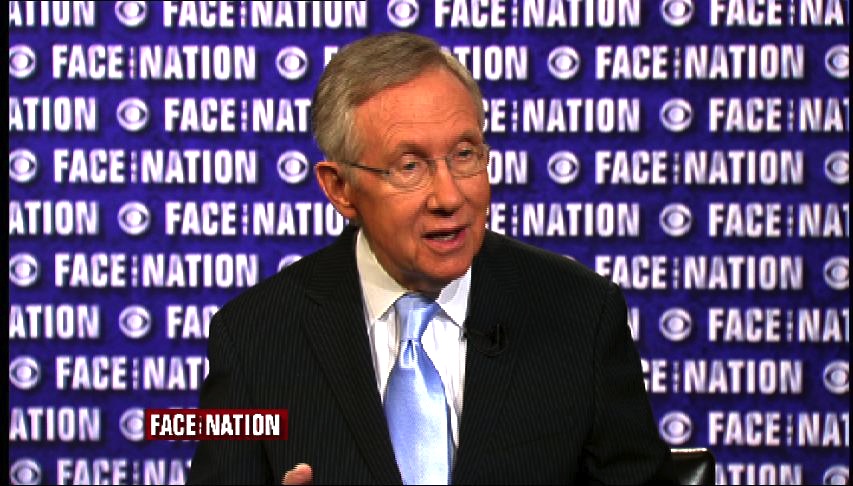 The Nevada Democrat has put emergency unemployment compensation, which expired on Dec. 28, at the top of the agenda when lawmakers return on Monday. “It’s the right thing to do. We have long-term unemployment. That’s why the American people support this – Democrats, Independents and Republicans,” Reid said on CBS’ “Face the Nation.”

He is backing a plan crafted by Sens. Jack Reed, D-R.I., and Dean Heller, R-Nev., that would restart the benefits for three months and figure out later how to offset the billions of dollars it would cost the government to do so. Many Republicans, especially in the House, have resisted the idea of writing more benefits checks without a way to pay for them first.

As for whether he’d be able to find five Republicans to join Democrats on the bill and avoid a filibuster, Reid indicated they should follow the example of Heller, his fellow Nevada lawmaker and a Republican cosponsor of the bill.

"Dean Heller's not some maverick that's out there spewing socialism,” he said. “He’s a guy who is really a conservative person and he wants to extend unemployment benefits. I admire him. Can’t we get four Republicans to agree with the American people that we should do that? I would certainly hope so.”

Reid is working to push the agenda away from the Republican priority of deficit reduction and more toward policies he says will help the middle class, like raising the minimum wage. “We have a situation in America today that is really not good….the rich are getting richer, the poor are getting poorer. Middle class are being squeezed out of existence,” he said.

As for Republicans who are still concerned about the deficit, Reid suggested they pass comprehensive immigration reform legislation along the lines of the Senate bill that passed in June, which the Congressional Budget Office estimated would reduce federal deficits by almost $200 billion in the next 10 years.

Democrats will face an uphill battle getting their agenda through Congress, even with a majority in the Senate. Friction between the two parties, already high, has increased in the wake of Reid’s decision to invoke a change in the chamber’s rules that would prevent the minority party from using the filibuster to block judicial and executive branch nominees. But Reid defended his decision, saying it was a necessary move to get lawmakers back to the business of legislating.

“We cannot have a country that’s paralyzed,” he said, putting the blame at the feet of tea party Republicans in Congress. “I’m not here to badmouth Republicans around the country. I get a lot of support from Republicans in Nevada, always have. They are mainstream Republicans not driven by this craziness we have.”

Reid said he’s not yet thinking about the idea of trying to eliminate filibusters entirely -- “We’re not there yet,” he said -- but that he thinks Congress will continue to be unproductive until Republicans change their tactics.

“Unless the Republicans in Congress decide they should do something for the American people I'm sorry to say that's true. The rating in Congress is down. If somebody called me in a poll, I would vote with them,” he said. “This is awful what's been going on.”